Carey: It will take another year to sort out F1 TV bugs 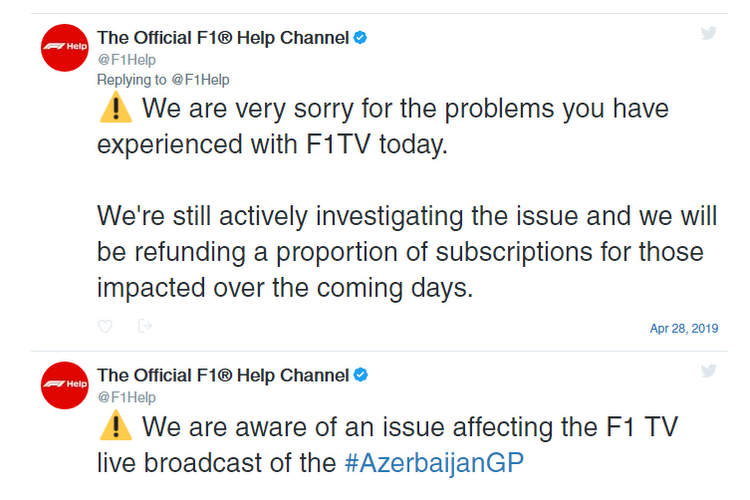 The problematic F1 TV Pro stream is likely to continue with hiccups for the remainder of the season according to Formula 1 chief Chase Carey who revealed the recent spate of problems caught them unawares and he cannot guarantee a solution will be found any time soon.

Simply following the @F1Help Twitter feed will reveal a catalogue of constant apologies for transmission problems, and a storm of complaints and criticism from subscribers.

This site recommended in a recent opinion piece that, if streaming Formula 1 session live is the priority for a subscriber, then it would be unwise to spend the money at this point as more often sessions are interrupted with users reporting the signal freezing, credentials not recognised and a plethora of problems that continue to be not only frustrating for all concerned, but also embarrassing that F1 cannot provide a suitable feed for subscribers.

During a conference call with financial journalists, Carey admitted his team were ambushed by the problems that ruined Azerbaijan Grand Prix viewing for subscribers as problems made uninterrupted viewing almost impossible.

He said, “The issue that arose in Azerbaijan really was unexpected. That’s the nature of these platforms. You have to deal with it and, to some degree, the unexpected is obviously always troubling.

“The unexpected will occur occasionally, but I think we felt we’d made pretty good headway. We’re not far enough to say there won’t be another problem.”

“But the problems before that had been probably quite manageable. These things aren’t perfect, and it will probably take us another year to get all the small bugs out of it. But the significant glitch that we had there was something outside the core of what we’ve been building in the platform.”

“We need to make sure that we’re looking at it in the wider context, but I think the core of what we expected to be the platform is, we feel, functioning pretty well. Not perfect, but pretty well.”

Furthermore, much-promised niche content such as data and historic archives are on ice for the moment as the consensus amongst F1 fans is that the service is welcome but F1 TV should first sort out a solid live stream before they evolve the platform.

With reference to the delayed content, Carey explained, “Some of that takes time to build. Making accessible to consumers some of the expanded data that we think will be interesting and compelling to them is still a work in progress.”

“We certainly have forms of content, broadly defined, that we will be adding at the end of this season, that we’re working on.”

“There’s still a lot going on to expand and build the content and, in all honesty, we’ll probably never stop. It’s probably between the beginning of next year and the beginning of the following year that we get to the ‘Phase One’ of what we feel is the over the top product that we envisioned going into it.

“We initially probably thought we could get there in two years, obviously last year we were a bit behind. What we thought was two is probably likely in three. Dealing with problems always sets you back a little bit, but I think we actually feel we are making headway and getting to where we planned and hoped to be.”

While Liberty and their streaming partner chase their tails, the likes of MotoGP, Indycar, Nascar, WEC are all capable of delivering decent OTT content and live stream without issues.

This is the worst PR that the F1 apps and F1 TV can get. This news and the apparent apathy to the situation, from no less than the big boss Carey, is sure to anger existing subscribers into not renewing for a second year, but rather wait for the finished product whenever that is finally delivered.

Big Question: What will make you renew your F1 TV subscription if you have one already? If not, when will you subscribe to F1 TV?

Inside Line: F1 TV is crap don’t buy it until further notice