Williams to be compensated for Baku manhole incident 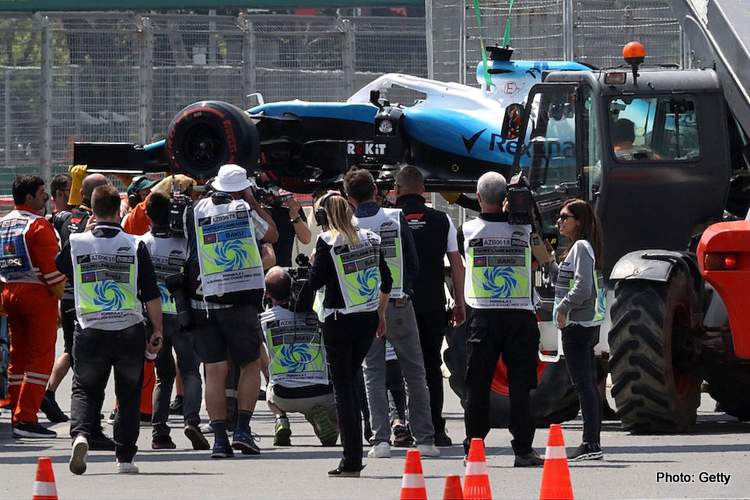 Williams will be compensated for the damage caused to George Russell’s car by a loose manhole cover, organisers of the Azerbaijan Grand Prix have confirmed.

Significant damage was inflicted when Russell ran over the grid cover during the first free practice session in Baku, with his chassis having to be sent back to Williams’ factory.

The incident led to the abandonment of FP1 and forced Russell to sit out FP2, while deputy team principal Claire Williams vowed to seek recompense.

Arif Rahimov, the promoter of the Azerbaijan GP, has confirmed talks are ongoing with Williams over the payment, “Obviously this is our fault, we did admit it.”

“It’s something that we as a circuit shouldn’t have allowed. We have checked against our insurance policy and it is fully covered. Our legal department is talking to Williams’ legal department and they will be reimbursed in full.

“Obviously there are no hard feelings, as we both understand that it was never meant to be and it was definitely not on purpose.”

It took almost a year for Haas to be paid out for a similar incident at the Malaysian Grand Prix in 2017 but Rahimov is eager for a swift resolution.

“We have mentioned this to Williams,” he explained. “We spoke to the insurance company [and told them] we need to make sure this happens as soon as possible, not [in] a year, because they need this money so they can use it this season.

“We will push the insurance company to expedite the claim and pay Williams as soon as possible. We were very apologetic and we also sent some flowers to say we were really sorry about what happened,” added Rahimov.

RED FLAG: The session is halted after George Russell encounters trouble with a drain cover and is forced to a standstill