Marko: Ricciardo bet me that Mercedes would let Bottas go 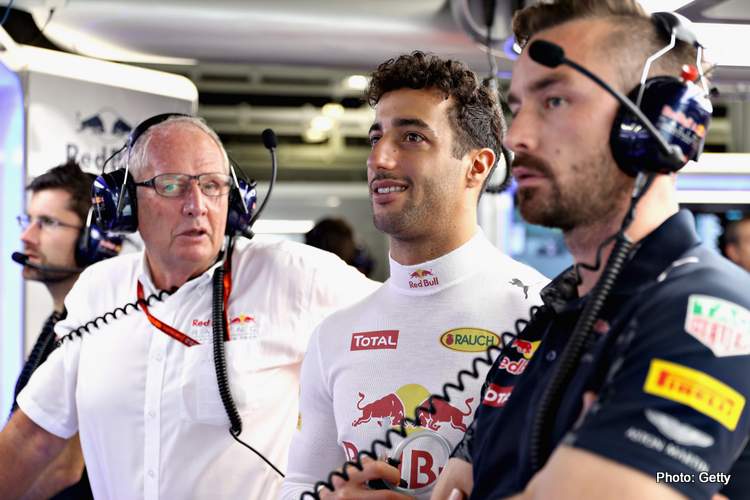 Daniel Ricciardo ditching Red Bull for Renault was a huge Formula 1 story last year and, now, for the first time, Helmut Marko has revealed how negotiations proceeded and how they ultimately failed to keep the Australian in the bullpen.

With Max Verstappen ‘owning’ the higher ground at Red Bull, their once blue-eyed-boy Ricciardo decided it was worth the risk of moving to Renault as the energy drinks outfit gamble on Honda this year.

It was a big call for his career, moving from proven winners in Red Bull to Renault whose boss has talked the talk for years but delivered little relative to what the other works teams are achieving on track.

After four rounds in this year’s championship, it appears Ricciardo may have erred in his decision because Renault have slipped to the bottom of the power unit pecking order while Red Bull are making progress with the Japanese manufacturer.

The inside line to Ricciardo’s decision-making process was well documented in the recent Netflix documentary series “Drive to Survive” where viewers were treated to some telling ‘fly-on-the-wall’ moments regarding the subject.

Of course, Ricciardo was waiting on Mercedes to decide on Valtteri Bottas’ future and firmly believed the Finn would get the boot as Marko explained, “I bet with him and, thankfully, Bottas stayed with Mercedes. Ricciardo did not believe that would happen.”

After receiving the €1000 in cash for winning the wager, Marko explained, “When I bet with him, I already knew what I’m talking about!”

But Ricciardo’s defection to Renault, with whom Red Bull had a nasty final couple of years as an engine customer, was a surprise and blow to their well laid out plans, which included the Australian until he decided otherwise.

Marko continued, “For me, it looked like everything was fine. We improved the offer and discussed everything he thought was in need of improvement, including personal sponsors he had from Australia. That was a relatively long conversation.”

“Then he had a meeting with Mateschitz over the weekend, where he also more or less suggested that he would be staying. But then there was never a signature, the contract was ready, but he kept coming up with excuses… always something else.”

The stalling became apparent after the Austrian Grand Prix, from which point Red Bull were waiting on Ricciardo’s signature. But the delays continued.

“Then he said Hungary, and then again not in Hungary,” recalled Marko. “After the test in Budapest, I already knew it was not going to work anymore and, from on Silverstone, all the information came through his lawyer.”

“At Ferrari and Mercedes, the doors were closed and with us, there has been some tension between the two drivers since Baku, but this was not exposed to the outside.”

“He was with us for ten years, always wanting a structure where he did not have to worry about anything, which we gave him, but then for some reason he wanted something different.”

Ricciardo himself confirmed that early last year Renault was not on his radar, “At the beginning of the season I thought that I would have many options, which I really believed at the time.”

“In the end, it was less then I thought. I do not want to get involved in a war of words with Helmut, I like Helmut.”

As for the thousand bucks bet, he lost to Marko, Ricciardo explained, “We bet again in Melbourne. It was about qualifying and he believed that they would put a car in the top three. I took it up, so I got my money back, but betting with Helmut is over now!

“The story is still okay, good for Formula 1, right?”

Big Question: Has Daniel made the right career move?