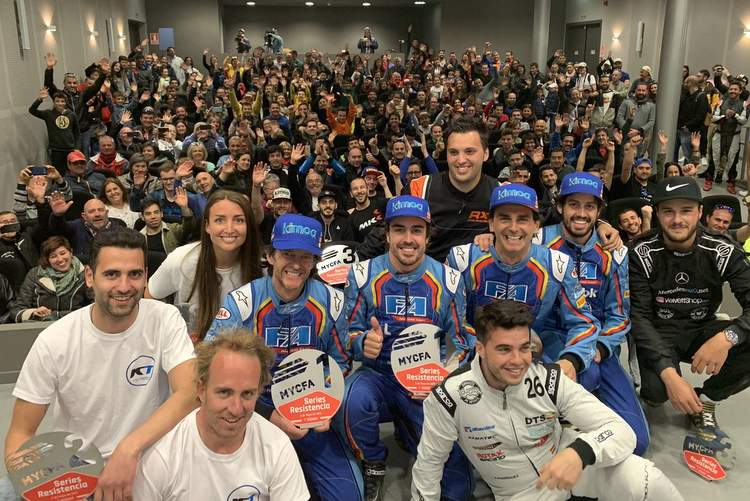 Fernando Alonso is keeping mum about his future plans but has revealed that he has a “special project” he is considering after he ends his season in the World Endurance Championship after Le Mans this year, he will be free to follow his whim in 2020.

Alonso was participating a six-hour karting event at his race track in Spain, merely a day after he triumphed with Toyota Gazoo Racing at the 6-Hours of Spa-Francorchamps on Saturday.

During the event, he was asked by SoyMotor about his 2020 plans, to which he replied, “I’m a strategist of course. I have an idea in my head, a project, but until everything is finalised, everything is talked through, I prefer to continue to quiet about it, once everything is confirmed I will be able to announce it to all.”

Although the Triple Crown is high on the Spaniard’s agenda, he is not obsessed with it and is enjoying his adventures outside of F1, “I have had the good fortune to compete in many prestigious races and in many places with a great deal of motorsport DNA.”

“I have managed to do perform well, therefore and I have good memories of these. Of course, if I ever get the Triple Crown, it will be special for sure,” added the double F1 World Champion.

No doubt Alonso’s words will kick up a storm of speculation and of course, as always, we are only too happy to jump on the bandwagon of: “Where in the world will Fernando race next?”

Odds are many will predict he does Dakar with Toyota but this would be way off the mark as this is not a discipline in which he can immediately excel, off-road is an altogether different game and no way he is going to win at his first attempt.

And as much as Alonso wallows in racing, his objective is to win what he competes in first and foremost. So tick-off MotoGP and Nascar.

That leaves Formula E and Indycar, both series will dearly love to add the Fernando Alonso name to their roster and it would be no surprise if a bidding war of sorts is conjured up between the two organisations.

With McLaren building a team for Alonso to contest this year’s Indy 500, it would be safe to surmise that if the project is a success a full season of Indycar in 2020 might well be on the cards.

If this indeed were the case, the smart way to tackle Indycar 2020 would be to get a taster or two after the Brickyard foray. Eight Indycar races remain in the championship after Alonso bids farewell to Toyota after this year’s Le Mans 24 Hours.

Cracking it big in the United States will add massively to his legacy, already he has won the hearts and minds with his performances at Indy last year as well as winning Daytona and Sebring this year.

The support he already has States-side could swell substantially should he commit to a season or two of Indycar, and of course if he wins the 500 his stock value will rocket through the roof and furthering his career there would be a no-brainer.

None of the above can be confirmed at this stage but it is the obvious assumption anyone can make that the Alonso-to-Indycar scenario is a match made in heaven for both parties, even if McLaren are not up to it one could not imagine the likes of Roger Penske, Andretti Autosport or Chip Gannasi allowing the opportunity to go by.

But Alonso is known for some questionable decisions during his career thus we await with anticipation, and a dash of trepidation, for details of his project to unfold in coming months.