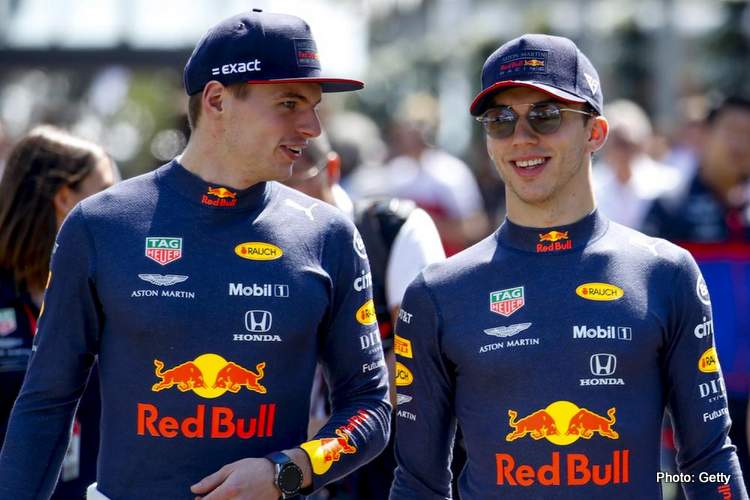 While Max Verstappen will drive the wheels of anything he is given, few if any can maximise what they have at their disposal as the Dutchman can.

No surprise then that he is demolishing Pierre Gasly who so far is struggling to match his teammate since he stepped up to Red Bull.

Verstappen is the defacto number one in the team and so far Gasly has hardly had a look in as he grapples with a car, not to his liking.

While team boss Christian Horner is obviously impressed with their Dutch star, he is not ready to press the eject button on the Frenchman just yet.

Speaking at an Exxon Mobil function, Horner said, “Max selected another gear since last year’s Canadian Grand Prix. The way he drove from that point onwards has been hugely impressive. He had a run that came to end in Bahrain of six straight podiums.”

“He also scored the second highest amount of points behind Lewis Hamilton in the second half of last season and he’s carried that form through the winter to the start of this year. We want to give him the tools that he can take the fight to the Ferraris and Mercedes.”

As for Gasly’s challenging start to his first season in the Red Bull senior team, Horner explained, “Pierre just needs some time. It’s a big step, joining Aston Martin Red Bull Racing from Scuderia Toro Rosso. Australia was challenging but he drove a good race in Bahrain and then had another solid race in China.”

“Clinching the fastest lap, and the bonus point that came with it, was a real positive for him.”

“Whilst Pierre was unable to finish the race in Baku, setting fastest lap in Q1 and racing from the pit lane to sixth on Sunday, before retiring due to a mechanical issue, was his strongest race weekend to date and he will take confidence from it moving forward,” added Horner.

It was an ’emergency’ promotion for Gasly from Toro Rosso to Red Bull after Daniel Ricciardo defied expectations and decided to ditch the team and move to Renault.

This left the energy drinks outfit in a pickle because their young driver programme had run dry, so Gasly got the nod a year earlier than they would have wanted.

They drafted Daniil Kvyat to replace Gasly, and Alex Albon was an unexpected to the line-up late in the day. By design or not, the organisation have the Russian as a possible substitute should Gasly’s form not improve, while Albon is ticking all the boxes in his rookie season.

Ahead of the Spanish Grand Prix next Sunday, with four rounds run, Verstappen lies fourth in the championship with 51 points, with Gasly in seventh on 13.