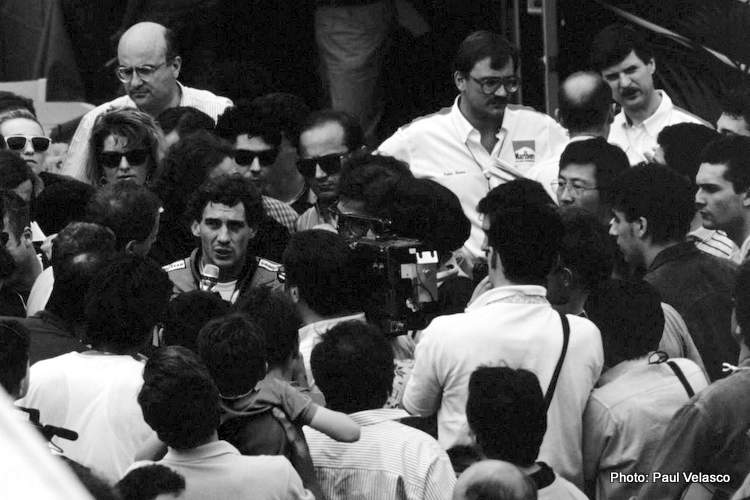 Going through my archives incredibly I found an image of Peter (top right with Marlboro shirt and glasses) on the fringes of a media scrum around Ayrton during a Monaco Grand Prix in the early nineties – Paul Velasco.

Imola used to be one of the nicest Grand Prix events. It was much more laid back than Monza and usually the start of the European Grand Prix season, a great circuit, friendly environment and of course in Italy, fantastic food in the very understated trattorias.

That all changed in 1994. Although now 25 years ago, I remember it as if it was yesterday!

There had not been death at a Grand Prix for 12 years, not since Riccardo Paletti was killed at the Canadian Grand Prix. So when at Imola there were not one, but two fatal accidents over the weekend, it was a terrible shock, especially for those of us who knew both the drivers involved.

I had got to know Roland Ratzenberger in my early days in McLaren marketing when we ran the TAG Heuer Downhill Ski programme and the skiers had the same management as Roland. He was a very likeable character and whenever I saw him he always had a ready smile and a joke.

In Formula 1 I used to look after the sponsors and liaise with the drivers for their promotional activities and I had broadly started regularly attending the races at the time when Ayrton Senna joined the team. After his many successful years in a red and white McLaren, we were still adjusting to seeing him in a blue and white Williams.

The 1994 San Marino Grand Prix was a most bizarre weekend. At Imola that weekend it felt that the previous 12 years was compounded into a bubbling cauldron of bad luck set to explode.

Firstly, at the beginning of the weekend, we had a McLaren sponsor who fell ill and had to be admitted to hospital.

On Friday, Rubens Barrichello literally flew off the track in his Jordan having been launched from a kerb at the Variante Bassa corner at 140 mph (225 km/h). He hit the top of the tyre barrier and was knocked unconscious.

Having been transferred to Maggiore Hospital in Bologna by helicopter for routine tests and observation, he returned to the track the next day, with a broken nose and a plaster cast on his arm, which forced him to sit out the rest of the race weekend.

On Saturday, it was twenty minutes into the final qualifying session when Roland Ratzenberger failed to negotiate the Villeneuve Curva in his Simtek and hit the opposing concrete barrier wall almost head-on. After the impact the engine cut out and there was an eerie silence as the car came to a halt with poor Roland fatally slumped in the cockpit.

The Formula One paddock went silent in a state of shock. Ayrton Senna was deeply affected by the tragedy. In his memoirs Professor Sid Watkins recalled Senna’s reaction to the news, saying that “Ayrton broke down and cried on my shoulder.”

Sid tried to persuade Ayrton not to race the following day, asking “What else do you need to do? You have been World Champion three times, you are obviously the quickest driver. Give it up and let’s go fishing.” Senna replied, “Sid, there are certain things over which we have no control. I cannot quit, I have to go on.”

The season so far had not gone to plan for Ayrton. His dream drive with Williams was proving a challenge. Active ride and traction control had been banned at the end of 1993, which stripped Williams of some of the advantages they had from their previous two World Championships.

In addition, Ayrton was struggling to understand how the Benetton of Michael Schumacher was so competitive against the Williams and there were rumours of hidden traction control on the Benetton buried in the depths of a software programme. The pressure was on and Ayrton knew he had to deliver.

Whilst both had a family feeling within, McLaren went out of its way to cosset their drivers, whilst Williams left them more to get on with it and at this stage of the relations with his new team Ayrton must have felt it. In fact, at the first Grand Prix of the year in Brazil, he seemed to spend quite a bit of time in his old team’s garage!

The McLaren team stayed at the Hotel Castello in Castel San Pietro Terme, which was a twenty-minute drive from Imola. We were always looked after very well, and once Ayrton had left the team he persuaded Williams to move there as well.

I remember on Saturday night when we all were in a numbed state of shock, looking out of the window and saw Ayrton arriving back in the hotel from the track in his Renault Espace, looking very shaken and that night he stayed quite a while in Frank Williams’ room talking.

Ayrton had a routine behaviour over a Grand Prix weekend. On Thursday when we arrived he was usually open and friendly. I used to have to sit down with him to go through the sponsor promotional schedule with him for appearances and dinners he was to attend. This was covered in some detail, how long it would take when he had to be collected and what he had to do.

Once agreed, the schedule was fixed and there was to be no deviation, you couldn’t slip in anything else and woe betide you if you messed up! However, that didn’t work both ways, especially when you heard him utter those terrifying words to a marketing person: “I know that I am obligated but ….”!!!

As the race weekend progressed, he would become more and more focussed and single-minded, to the point that he would be sitting in the car on the grid, with his helmet on, total concentration and almost oblivious to the crowds around him.

In 1994 it was different. If you watch the movie Senna, you see him on the grid, helmet off and visibly distracted. There have been all sorts of theories about his behaviour and I am not going to go into that, but he was deeply affected by Roland’s death plus he knew he had to push hard from the start to win.

At the start of the race, the Benetton of J.J. Lehto stalled on the grid. Pedro Lamy, who started further back had his view of the stationary Benetton blocked by other cars and slammed into the back of Lehto’s car. Such was the impact that parts of the car and a wheel were launched over the safety fencing into the startline grandstand injuring a number of spectators.

This brought out the safety car. Unlike the high powered Mercedes sports cars used today, this was a saloon car which could not be driven that fast and as a result of travelling at slower speeds, the tyre temperatures on the F1 cars fell. In fact, onboard footage from Ayrton’s car shows him almost overtaking the safety car in an attempt to make the safety car driver go faster.

Once the track at the start-line was cleared of debris, the safety car was withdrawn and the race restarted with Ayrton leading Michael Schumacher. On the second lap after the restart, with Ayrton pushing hard, his car unexplainably veered off the track at Tamburello and hit the barrier and came to a stop.

With debris lying on the track and the sad sight of seeing Ayrton lying motionless in the cockpit, the race was red flagged and stopped. The medical team led by Sid Watkins lifted him from the car and after on-site medical attention, he was airlifted directly to Maggiore Hospital in Bologna.

In Italy, it is seldom that a driver has been known to have been pronounced dead at a track, apparently for the legal reason that if that happened then the race would have to be abandoned. It was not until 6:40 pm local time, that it was officially announced that Ayrton Senna had died.

The autopsy recorded the cause of death as head injuries, likely caused by an impact from a piece of suspension that pierced his helmet. It has been said that if the impact on the helmet had been a few inches either side then he may well have survived, as otherwise there was scarcely a bruise on his body.

After the accident at the track, a sense of shock engulfed the circuit. In the McLaren hospitality area, our then test driver Jonathan Palmer, who also qualified as a doctor, carefully explained the procedures to the assembled guests, but a sense of numbness prevailed.

For the teams, many were operating on remote-control to get ready for the restart of the race, which Michael Schumacher won ahead of Nicola Larini in a Ferrari and Mika Häkkinen in a McLaren.

However, the drama continued at the second restart. On lap 48, when Michele Alboreto pitted, the rear-right wheel of his Minardi came loose as he left the pit lane, striking two Ferrari and two Lotus mechanics who had to have hospital treatment.

The paddock was a sombre place and we couldn’t wait to leave. I went with Jo Ramirez the McLaren Team Co-ordinator, my colleague Peter Stayner and Nigel Geach one of the team’s sponsors.

We were early for the flight so we found a little restaurant where we had a few much-needed glasses of wine, to reflect on a very sad and tragic weekend. We all knew Ayrton in various ways and it was impossible to believe that he was no more.

Many of the teams were on a charter flight that night from Bologna Airport to Gatwick. Both the McLaren and Williams teams were positioned at the front of the plane as the team management were conscious that there might be the media waiting for us when we landed, but this was expertly managed by the teams’ press officers.

So bad had been the outbreak of serious events, that we even started to wonder whether the plane would safely make the flight home! In fact, what we didn’t know at the time was that the Pacific F1 team’s race transporter carrying their cars caught fire on its way back to the UK when going through the Mont Blanc Tunnel!

It was the most bizarre and tragic weekend, but actually it didn’t end there.

Two weeks later it was the Monaco Grand Prix and during the first practice session, a deadly hush descended over the track as Karl Wendlinger had a serious accident as exited the tunnel and lost control of his car under braking for the Nouvelle Chicane.

His Sauber hit the wall sideways with considerable force. Wendlinger’s head struck a water-filled barrier within the metal crash barrier. He remained in a coma for several weeks and did not drive in a race for the rest of the year, although thankfully he recovered.

It really did feel that the previous 12 years without a fatal incident had had its revenge!

Note: Peter Burns has over 30 years experience in the global motorsport industry, including 17 years in Formula One with McLaren as Senior Marketing Manager working with drivers including Alain Prost, Ayrton Senna, Gerhard Berger, Martin Brundle, Mika Hakkinen and David Coulthard.