Rosberg: I am very sure Mercedes don’t hide their true pace 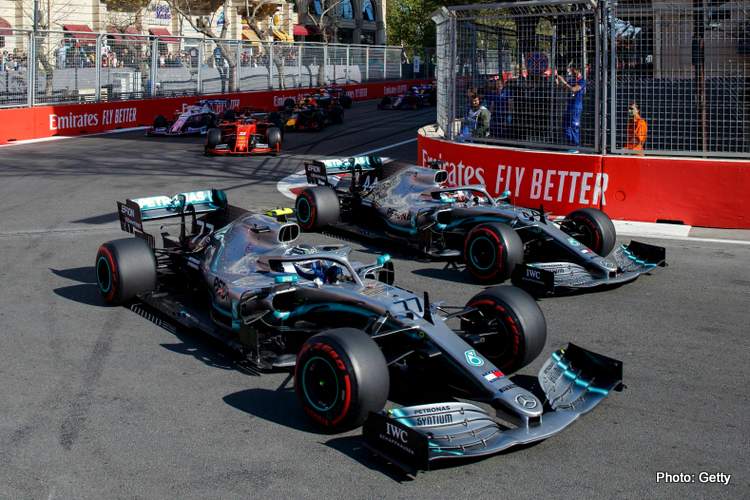 After four rounds of the 2019 Formula 1 World Championship it is pretty clear that Mercedes are going to be hard, if not impossible, to beat on current form and although suspicions of them having the horsepower reserve abound, Nico Rosberg believes his former team are playing their full hand.

In his post-race vlog, the 2016 F1 World Champion asked and answered the question: Are Mercedes always hiding their true pace?

Rosberg replied without hesitation, “No. They’re not. They’re definitely going for it in qualifying, of course, they always have the party mode at the end of qualifying there which brings a few tenths but apart from that they’re always going for it and they can’t afford to hold back.”

“Of course in the race they’re going to try and turn on the engine when possible but the other guys were so close behind and they had to rev the engine pretty much all the way there. I’m very sure about, that so are they not.”

“Mercedes is on it, they’re showing their true pace. They just have the fastest package at the moment and they never make any mistakes – not the team, not the drivers – just awesome how they keep it together.

Rosberg knows a thing or two about going up against Lewis Hamilton. Until now Valtteri Bottas has had no answer to his teammate, but this season there has been a marked change in the cool Finn’s attitude and as a result, he leads the championship and looks intent on slugging it out with his teammate as their rivals already fall by the wayside.

Rosberg said of the situation, “Great to see the battle between the two. Valterri did an awesome job just around the outside, he really did a great job holding on and hanging in there. It was really, really great to see so he deserved to be ahead after that. Great to see him holding his position and not just playing second fiddle this year.”

“He’s really holding up against Lewis and staying ahead, so that’s really cool and then, apart from that, it was just a great race from Valterri.”

Bottas won the race in Baku from pole position but was not given an inch of breathing space as Hamilton stalked him all the way to the line, giving it a big push in the final laps fo the Grand Prix.

“Lewis I think was marginally quicker,” explained Rosberg. “But there was no way for him to pass and he was really trying at the end, which was exciting to see, but when you have the same cars and not much pace difference there’s just not much you can do there.”

Four one-twos is a formidable way to start a championship campaign and right now the Mercs look invincible no matter which way you look at it, but Rosberg has hope that the Reds will rise to the occasion next up in Barcelona.

“Mercedes is really looking strong, but Ferrari might have a small chance depending on how the tyres are. Looking at Barcelona also in winter testing Ferrari was quickest so I think they can come back and they have a chance for pole there. I think we all want that because it would be awesome to see them fighting back a little bit, that would be great.”

“On one of my first videos of the season, I said that Valtteri really has a chance this year to be champion because it’s a different Valtteri we’re seeing. Everything is going his way as well, last year he had a lot of bad luck now he’s had a start of the season where everything’s going his way.”

“It just gives you a completely different mindset and puts you in a different confidence level, as well, and that just matters so much in sports. Valtteri now has really high confidence and therefore he can continue fighting Lewis now and in the next couple of races.”

“He does have a chance to win the championship, there’s no reason why not he’s driving strongly in all and in qualifying he’s right there all over Lewis. He’s really doing well amazing how it can go from one season to the next isn’t it how last year Valtteri was just in no man’s land and then suddenly just over winter reset.”

“Probably he learned some things from me as well, I suppose, and then just come back fighting strong and not focusing on Lewis and just focusing on yourself and getting the job done that’s what matters.”

“Valtteri is doing that so our hats off to him, he is doing well,” added Rosberg who drove for Mercedes from 2010 until he retired at the end of 2016, sharing a pit garage first with Michael Schumacher and then with Lewis Hamilton for four years.