Hakkinen: Teamwork is key to Bottas and Hamilton strength 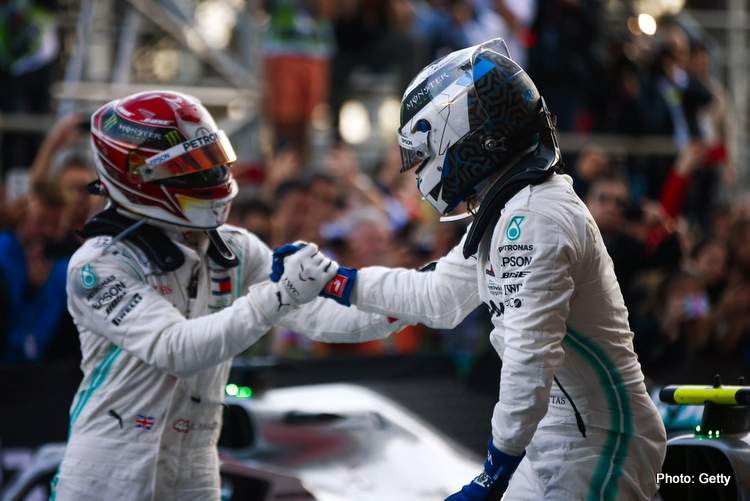 I could not have been happier for Valtteri Bottas on Sunday. In winning the Azerbaijan Grand Prix he not only gained revenge for the puncture which robbed him of the win in Baku last year but also re-established his lead in the Formula 1 World Championship.

Four races into the season and Mercedes have scored a 1-2 each time, which is the best start for any team in the history of Formula 1. From the outside, this looks easy, but Mercedes have had to work hard every weekend and Azerbaijan was no different.

The Baku circuit is basically two long, fast sections with a twisty part in the middle, and on those fast straights, the Ferrari’s were very quick. In practice, it looked like Charles Leclerc might dominate the weekend.

I always say that to be successful in Formula 1 you have to focus on attention to detail. In Baku, this included watching the temperature of the track at the time qualifying took place, and also being on the best tyres for those conditions.

An accident involving Robert Kubica’s Williams in the first part of qualifying delayed the rest of the session. This meant that track temperatures dropped and then Leclerc, using the harder ‘medium’ compound tyre while the other teams were using softs, locked a wheel and crashed his Ferrari at Turn 8 – the narrowest corner in Formula 1.

It was a small mistake with big consequences both for Charles and Ferrari.

I have said before that one of the strengths enjoyed by Valtteri and Lewis Hamilton is their teamwork. In qualifying in Baku it is important to try and benefit from a tow from another car on the long straight at the end of the lap. You do this by using the slipstream of the car in front – the hole it makes in the air – to give you better top speed.

Valtteri timed his qualifying run perfectly to get a tow from the McLaren of Lando Norris, while Lewis got a tow from Valtteri. Valtteri had managed his tyre temperates better and was much quicker over the first part of the lap, so this secured his 8th Formula 1 pole position.

This teamwork continued into the race because, although the two Mercedes cars were side-by-side through the first two corners, they gave each other plenty of room and did not touch. Valtteri was then able to drive a fantastic first lap; he was two seconds ahead of Lewis by the end of it.

This performance from Valtteri was one of the very best we have seen, and from lap 1 onwards he completely controlled the race. A few laps before the end Lewis was told by his race engineer that he could go flat out, but although he closed to the gap, Valtteri responded. This was his race, and no one was going to steal it from him.

He now leads the World Championship by one point; the point he scored for fastest lap in Melbourne at the start of the season. He knows that in order to beat Lewis Hamilton every single point is going to matter, and that’s how he is playing it; winning when the opportunity arises, getting the maximum points finishes at other times.

At the moment the Championship battle is between the two Mercedes drivers. Ferrari has a very quick car, but at the weekend we saw that you cannot afford to have accidents, tyre temperature problems and only one car to race against two very competitive Mercedes drivers.

Going into the next race in Spain I expect Ferrari to push very hard to recover ground. They need to. This time last year Sebastian Vettel had won two Grands Prix, so it has been a tough start to the season for the Italian team.

I am certain they will come back and attack Mercedes. Charles Leclerc is learning all the time and showing how quick he is. Sebastian is reacting to that too, and if they can manage the tension between them they have the ability to challenge Mercedes for wins.

I expect Red Bull to be competitive in Barcelona, and it is interesting to see that Max Verstappen is only one point behind Vettel in the World Championship. The young Dutchman is maturing, and with Honda introducing an engine upgrade last week both Verstappen and teammate Pierre Gasly should start to interfere with Mercedes and Ferrari more often.

The final point about going to Barcelona is that all of the teams know the track very well thanks to pre-season testing. Behind Mercedes and Ferrari, I expect the battle to be very close between McLaren, Renault, Haas, Racing Point, Toro Rosso and Alfa Romeo.

All of the teams except Williams, which is having an extremely frustrating time with a car which is 4 seconds per lap off the pace. An extraordinary reversal of fortune for the team which gave Valterri his big break in Formula 1.

Sergio Perez’s P6 in Baku moves him into the top 10 🚀#AzerbaijanGP #F1 pic.twitter.com/Y3Ghj7axMu