Vettel: We need stronger pace it is as simple as that 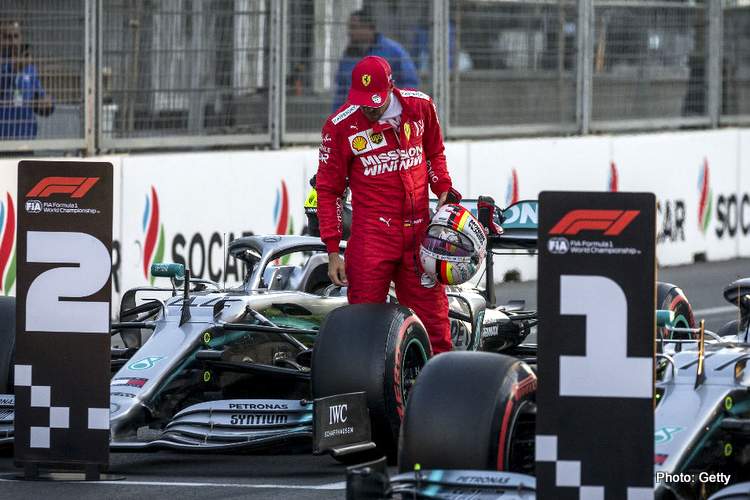 Ferrari departed Baku after being well and truly beaten in the Azerbaijan Grand Prix no doubt scratching their heads as they contemplate the gap to Mercedes and figure a way to take the fight to the pacesetters before it is too late.

Increasingly it appears that the SF90 is finicky getting the Pirelli tyres up to speed and in the optimum operating window which puts their drivers on the back foot when attacking for a hot lap and also vulnerable early on in the race and after pitstops.

In Baku, the Reds simply did not get a look in after Charles Leclerc pranged in qualifying. In race mode, Vettel could chase but not challenge the two silver cars ahead, while he had enough to contain Max Verstappen behind him. It was a top four stalemate on the day, they finished as they qualified.

Speaking in the TV media pen after the race in Baku, Vettel told reporters, “It [the upgrade] was a step forward with our car, but I think more of a dominating factor is just the way we seem to be able to get on top of or into these tyres. I think there’s a lot of performance in that.

“The struggle we had here in those low-speed corners is less of an aero problem, more of a mechanical grip issue. So a lot of homework for us, obviously, in the last couple of weeks, but I’m sure that once we get everything together the car is strong, and then we will be much more in the fight.”

“At this stage, obviously, averaging the first four races we were just not quick enough.

“We need stronger pace, it is as simple as that. We need to be faster. I’m convinced we’ve been, partly this weekend, looking very strong but overall not strong enough. So, it seems that for us it’s more of a conscious effort to get the car in the right window, whereas maybe for them [Mercedes] it seems to click a little bit easier.”

Until Leclerc’s prang, there was a sense that the team’s 21-year-old driver could deliver pole, he had the pace throughout practice but a tad late on the brakes into the tight castle section put an end to all dreams of grandeur.

But Vettel never looked likely to dethrone the Silver Arrows on his own.

The facts are that Ferrari drivers are having to drive too hard to try and match the Mercedes duo, hence mistakes happen as Vettel explained, “Especially a place like around here, you need the confidence in the car. I’m not yet there. I can feel that I’m not driving at my best because simply the car does not answer or does not respond the way I like. And then I think it’s unnatural. I think everybody’s been there.”

“All drivers know that sort of feeling: when it’s not there, then your judgement is normally right, to not go there because you end up losing the car. So, yeah, I seem to be more sensitive at the first races than at the test.”

Not long ago, after pre-season testing and ahead of the season opener, Ferrari were bullish heading to Melbourne but since then they have been comprehensively trounced by Mercedes, four one-twos is an incredible achievement by their rivals, but a damning record that will be hard to swallow at Maranello.

Vettel acknowledged, “The test was really good but that’s a long time ago now. We need to look forward and improve the way we handle things, the way we work to just get faster. That’s it.”

“Obviously the last four races, on average, we were not quite there, so I think we are not the favourites going to Barcelona, but the team is in good spirits. We have another couple of bits getting on the car, so we need to chase them down.”

“We are looking to hopefully a smooth weekend. Our first four weekends haven’t been that smooth. But it will be crucial to catch them and turn things around,” added Vettel.

He now heads to the next round in Spain trailing in the F1 drivers’ championship by 35 points to leader Valtteri Bottas, furthermore, the German has not won a Grand Prix since he triumphed at Spa-Francorchamps in August last year.

Big Question: How do Ferrari bridge the gap to Mercedes?