The Day After: Victory at Last! 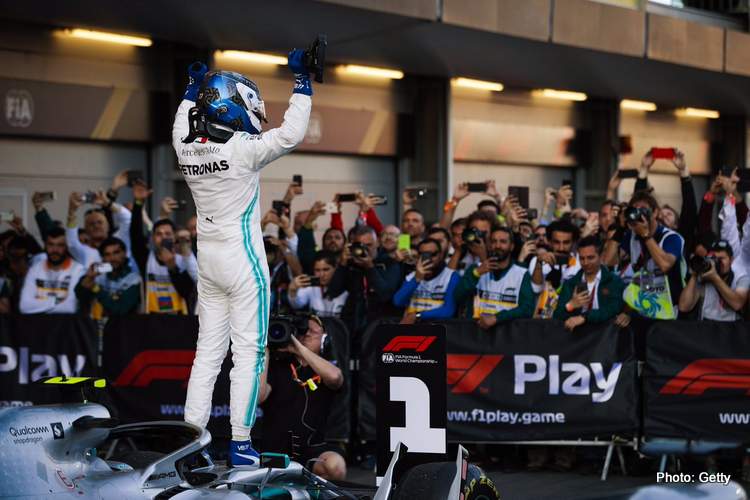 A year after a tyre puncture robbed him of certain victory, Valtteri Bottas more than made up for it with his impressive performance on Sunday in Baku.

What a difference a year can make.

This time last year, it seemed like the fates were conspiring against Valtteri Bottas, but now? The Finn is making his own luck.

Indeed, in starting from pole, fending off a faster-starting Lewis Hamilton, controlling the gap, then fending off another late challenge for his teammate, Bottas put in the exact sort of performance necessary to silence any doubt his first win in Australia was a fluke.

No, it wasn’t the most enthralling race for us watching, but if only in those small battles with Hamilton, this race was noteworthy for demonstrating both Bottas’ markedly improved mettle since the end of last season, and giving us hope that maybe, just maybe the driver’s championship isn’t already decided.

That said, I wouldn’t go expecting him to pull a Nico Rosberg and beat Hamilton for the title just yet. Baku has never been a favourite of the Brit’s, and until we see Bottas take the fight to his teammate on his own “turf”, it would be premature to suggest otherwise. Nevertheless, there’s no denying this is a new and much improved Valtteri Bottas we’re seeing in 2019, and so far at least, he deserves to lead the world championship.

It’s funny how quickly the perception around the point for fastest lap has changed. Prior to Australia it was generally met with scepticism (see comments), now, well… it’s currently deciding the driver’s championship.

Some very impressive results for Racing Point and McLaren with double-points finishes. Undoubtedly the toast of the midfield right now, their battle should get only more intriguing as the season progresses.

Pre-race tyre predictions may always differ a little from the eventual script, but in Baku, it was remarkable how wrong Pirelli’s assertions were. Regardless of fuel load, the expectation was the softs would last 25 laps, and yet no one managed more than Nico Hulkenberg’s 16. The performance simply wasn’t there, and while it’s easy these days to dump on the Ferrari pitwall, I don’t think they were left much choice with Charles Leclerc’s strategy as a result.

Driver of the Day: Valtteri Bottas

Withstood the pressure of Lewis Hamilton both at the start and as he closed again in the latter stages to take an impressive victory. Suffice to say, the firmware update he received in the offseason seems to be working.

Worst of the Day: Daniel Ricciardo

Impatience got the best of the Australian when he out-braked himself trying to take Daniil Kvyat at turn three, and yet it wasn’t enough to ruin his own race, as he proceeded to reverse into Kvyat while trying to get out of the escape road. Maybe next time leave the shoey until after the race?

“Today, our pace was not good enough and our rivals were faster. We have to go home, identify the areas where we are weak and push in our way of working, to make more aggressive choices to get back to where we deserve to be.” – Mattia Binotto, in an all too familiar position.