Bottas: It always can be better! 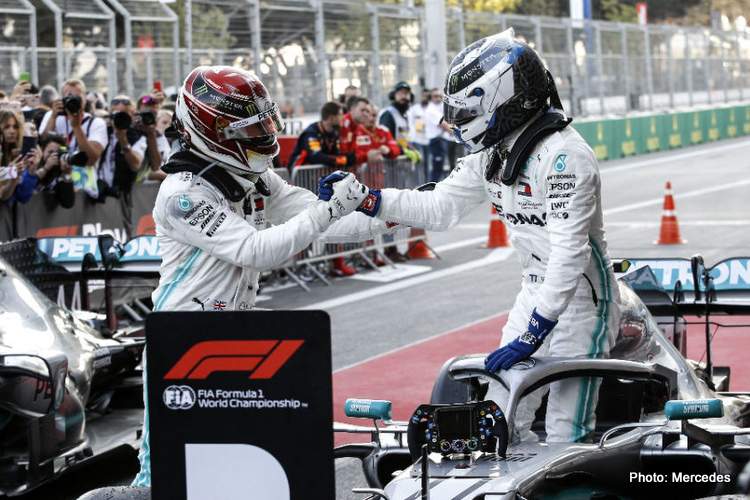 While Valtteri Bottas savours his fine victory at the Azerbaijan Grand Prix, many in the paddock are awestruck by the transformation that has befallen the fastest Finn in the world.

Bottas ‘Reloaded’ or ‘2.0’ is giving hope to F1 neutrals that he will finally give his illustrious teammate Lewis Hamilton a serious run for his money, if not beat him, in this year’s Formula 1 title race.

And while his Mercedes W10 is the envy of every race driver on the planet Bottas is taking nothing for granted despite his team notching up a record-breaking four one-two finishes in succession at the start of this season.

When asked if the W10 was the best in the line of some very effective F1 Mercs, Bottas replied, “It always can be better! For sure it’s maybe not still the easiest car to get to work, but once it works it’s quick, so something similar we’ve seen before and in the end.”

“It is an evolution from years before. There’s obviously work to do, but I think this year so far, the four races we’ve had, it’s not only the car. It’s all the areas the team is working on, how well we are performing in all the other areas than just the car. I think that’s maybe been the biggest thing so far this year.”

With a very strong car, a team at the peak of their prowess and two very handy drivers it is hard to see anyone dethroning the Silver Arrows, least of all the pit of inconsistency that Ferrari are proving to be yet again.

While Merc fans will be forgiven a wallow as their team cleans up, the reality is this high will be shortlived as there will come a time when the niceties will have to end when Bottas and Hamilton slug it out seriously, so far it is 2-2 after the first four rounds.

F1 needs Bottas to bring his A-game and take it to Hamilton as Rosberg did with success in 2016. The five-time F1 World Champion can be beaten and that possibility will be the saving grace of this championship, provided Bottas can match what Hamilton will throw at him in forthcoming races.

Beating his teammate in qualifying, from out of the blue, and then keeping him behind throughout a tense afternoon on the streets of Baku sent a signal of intent to all concerned. He is rising to the challenge, and it is broad smiles all around.

Bottas acknowledged, “The confidence is good. I’m happy to just carry on. Obviously, yeah, it’s been a good start personally for me for the season, it’s a long season ahead. I do realise that. But something I’m really proud of is the level at which the team is performing.”

“It’s, for me, incredible. We need to be really, really proud of that – but not think about it too much. Just keep doing what we’re doing and the list of things that we can do better as a team is still long. So we need to focus on that. So let’s keep going.”

For now, there are many “WEs” in there but the 2019 drivers’ F1 world title trophy has a place for only one name and if ‘Valtteri Bottas’ is to be it, then the likeable Finn has to remain reloaded and tap into his primal “Me, Myself and I” instinct which his teammate has in abundance.

The games are only just beginning within the Silver Arrows camp, maybe, in the coming rounds, civil war erupts for our entertainment. Other than that scenario transpiring fans have very little to look forward to in terms of a title contest in F1 this year.

Big Question: Can Valtteri beat Lewis to the title this year?