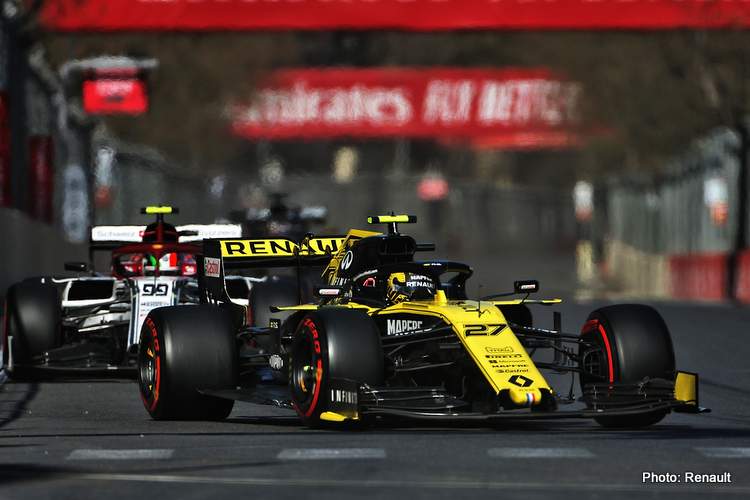 Renault F1 Team missed out on scoring points at the 2019 Formula 1 SOCAR Azerbaijan Grand Prix with Nico Hülkenberg fourteenth and Daniel Ricciardo retiring at the Baku City Circuit on Sunday.

Daniel, from tenth on the grid, made a bright opening to the race before an incident on lap 31 led to the Australian picking up damage to the rear of his car. He consequently retired from the race after pulling in to the pits.

Nico also made a clean getaway from fifteenth on the grid, but struggled to make any headway from thereon, finishing outside the points in fourteenth.

Daniel started from P10 on new Soft tyres, pitting on lap 10 for new Medium tyres before retiring on lap 31.

Nico Hülkenberg, 14th: “It’s been a tough weekend. Today I had no response or anything to offer. I was pushing really hard, I felt like I was driving as best as I could but couldn’t extract the maximum from the car today.”

“We have a lot to investigate going forward, but maybe it’s one of those mysterious weekends, which happen. It’s been difficult from lap one on Friday and we’ve consistently struggled. It’s a bitter one for me and the team, but we’ll move on from this and be as best prepared for the next one.”

Daniel Ricciardo, DNF: “It was a strange incident which forced the retirement, but it was my mistake and I’m sorry to the team and to Daniil [Kvyat]. It was a bit of urgency on my behalf and I didn’t think straight for a few seconds, so I have to take that one on the chin.”

“The team certainly deserved more today. We were bringing on a nice rhythm there and had some good pace on the Medium to continue on and we probably could have scored points.”

Cyril Abiteboul, Team Principal: “Very clearly it’s been a bad weekend. From FP1 onwards we never found our pace despite big changes to the car overnight. We finally managed to recover an acceptable competitiveness level during the race for Daniel but it would never be the case for Nico.”

“Overall, the first stint of the season has been disappointing, but if we manage to get all things in order we can have a decent competitiveness level as demonstrated on several occasions. We must absolutely see the start of the European season as an opportunity to reset.”