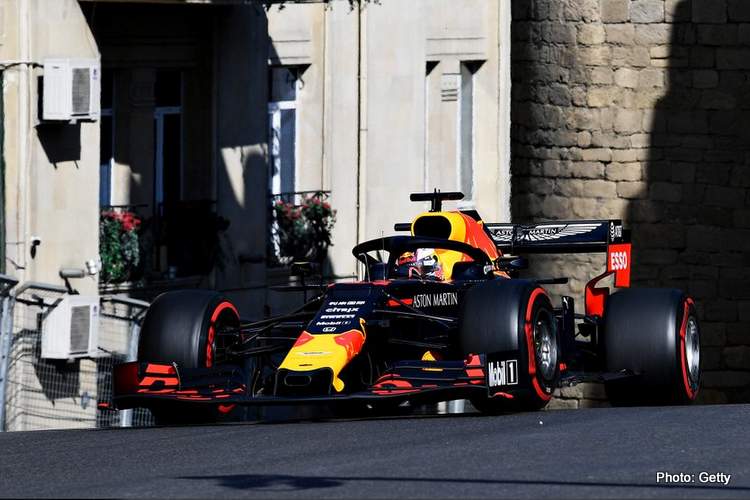 Red Bull report from the Azerbaijan Grand Prix, Round 4 of the 2019 Formula 1 World Championship, at Baku City Circuit.

Max Verstappen, 4th: “In general we had a good race. I always had the Mercedes and Ferrari in sight and I was just trying to close the gap. At the start I was blocked and couldn’t really brake deep into the corner, which allowed Perez to get past me. Of course, that lost me a bit of ground but you don’t want to risk everything on Lap 1.”

“Once I got back past, we went a little bit longer than the others on the soft tyre and I had a good feeling with the car. We had good pace, especially on the medium tyre in the second stint where I closed the gap by seven or eight seconds.”

“With the Virtual Safety Car, I think I lost too much tyre temperature and I couldn’t get it back as quickly as the others. Around here, tyre temperature is key and you end up sliding a lot more with low temperatures so it wasn’t worth risking the position in the final laps.”

“The performance in Barcelona will of course depend on the upgrades that everyone is bringing but hopefully we can be even more competitive and close the gap even further.”

Pierre Gasly, DNF: “This weekend has been a lot better than the first three races. I felt better with the car and I’ve been able to drive more the way I want to. In qualifying I managed to show some good performance with a good lap in Q1.”

“In the race, starting from the pit lane, we knew it would be tricky to fight at the front but we had a car fast enough to come back and score good points. Things in the race went pretty well and we got to P6 but unfortunately we didn’t make it to the end as I had a driveshaft failure.”

Christian Horner, Team Principal: “Max drove a strong race today. Unfortunately, after losing a position at the start to Perez, by the time he managed to get back past, he’d lost touch with the lead group. He then drove a very strong middle stint and caught the lead group by 10 seconds.”

“He was within three seconds of Sebastian before the Virtual Safety Car, ironically caused by Pierre, which took too much temperature out of his tyres and he just didn’t have the same pace after that. Not knowing fully what had happened with Pierre’s car, we decided to make sure that we got Max to the finish and he drove a conservative final few laps.”

“For Pierre, whilst it’s been frustrating for him results wise, this has actually been his strongest race weekend of the year to date. He drove a very strong race today and when you compare his pace to Charles Leclerc, who started the race on the same tyre, for fifty percent of his first stint he was faster than Charles.”

“Unfortunately, a driveshaft issue caused his retirement fifteen laps before what would have been an easy sixth place. Pierre can take an awful lot of positives out of the weekend for a very strong performance and it’s positive that we’ve taken a step closer to Mercedes and Ferrari.”