McLaren: Both cars in the points equals a good day at the office 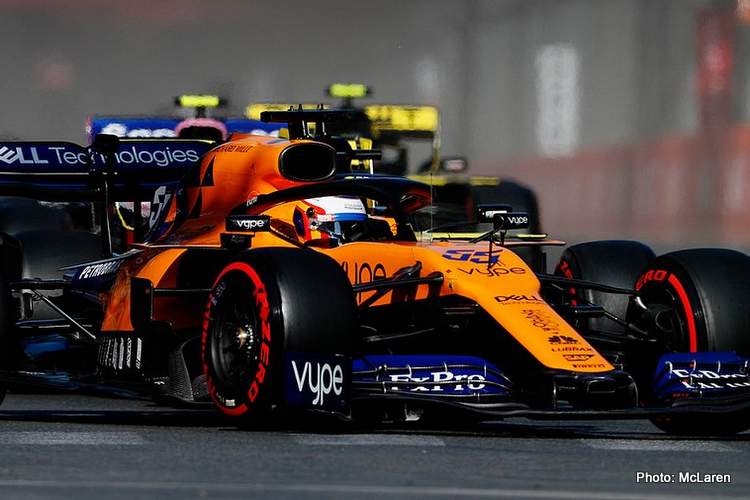 McLaren report from the Azerbaijan Grand Prix, Round 4 of the 2019 Formula 1 World Championship, at Baku City Circuit.

Carlos Sainz, 7th: “Happy to score good points today after yesterday’s setback with that yellow flag. I knew it was just a matter of time and having a clean race. Today we showed solid pace throughout the whole race.”

“Congratulations to everyone in the team for our first double-points finish of the year. Great effort from everyone. We need to keep pushing though, we have to be ambitious and aim higher! It’s a nice boost ahead of my home grand prix.”

Lando Norris, 7th: “Overall, it’s a good race for us as a team. A double-points finish, the first one of the year, which is a good thing. The whole race was pretty good. My start was probably the best I’ve done all year and I made no mistakes. I lost the tyres a little early in the first stint so boxed onto the Mediums, had a good middle stint and we took the decision to try the Softs after the VSC.

“The thinking was that the other tyres, the Medium, while not worn, had done a lot and wouldn’t be able to turn on as well. It looked like they did, so it was the wrong decision. It could have worked, maybe if it had been a bit colder, but it didn’t and that’s just something we have to look back on. It always happens in racing! A good weekend altogether.”

Gil de Ferran, Sporting Director: “Both cars in the points equals a good day at the office. Although perhaps from the outside it may have looked like a straightforward race, it was, in reality, anything but. Our cars had good pace, nevertheless, we had to be extremely careful with our tyre management throughout.

“Given that we had a ‘free’ pit-stop, we elected to take both a conservative and aggressive strategy at the same time by pitting Lando during the Virtual Safety Car. In this manner, as a team we had every strategic eventuality covered.

“And finally, congratulations to everyone at McLaren who has continually put in a tremendous effort at every grand prix that we go to. We leave here with a good taste in our mouth, but still, as always, calmly determined to continue to step forward.”