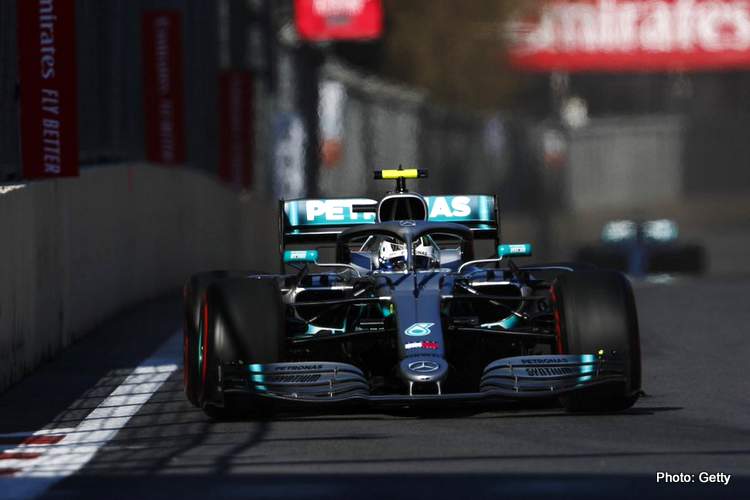 Valtteri Bottas powered to victory in the Azerbaijan Grand Prix – Round 4 of the 2019 Formula 1 World Championship, at Baku City Circuit – heading home his teammate Lewis Hamilton to score a fourth one-two in a row.

Stalemate pretty much sums up the Battle of Baku, Bottas and Hamilton went wheel-to-wheel through the opening lap but Bottas Reloaded edged ahead and thereafter set the pace to claim his fifth F1 win.

It was a very important moment in the power struggle within the team as the Finn flexed his muscles to the point that his teammate lamented not being more aggressive in that battle.

Nevertheless, the facts are that whatever Ferrari threw at the World Champs this weekend they simply absorbed and again stamped their authority on the grand prix. And credit to the Silver Arrows for allowing Hamilton to pressure Bottas all the way to the flag.

Race winner Bottas summed up, “It was a tough race even if not much happened at the front. Lewis was putting pressure all the time so I couldn’t do any mistakes. Everything was under control so I was happy to see the chequered flag.”

“It means a lot. It’s incredible as a team the level we are performing at now. For me, it’s only my fifth win so it feels good and it carries on.”

Hamilton added, “Congratulations to Valtteri, he drove a fantastic race and made no mistakes so deserves the win. It was all lost in qualifying so there’s not more I can say. It’s a great result for the team. This is the best start to a season we’ve ever had.”

“It’s a team effort. Everyone back at the factory has been working non-stop, every year they come back more hungry for success and it’s true testament to the strength in depth.”

Hamilton started the day six points ahead in the championship but Bottas is now back on top by a point. They’ve both have two wins and two second-place finishes but the Finn has an extra point for fastest lap in Melbourne.

Sebastian Vettel salvaged third for Ferrari at a race where the Reds arrived as favourites only to depart with their tales between their legs. Underachieving again, they leave Baku 74 points behind Mercedes in the constructors’ championship standings.

Vettel said of his afternoon, “The first stint was really poor. I really struggled to initially get the tyres to work. I think they were too cold and I damaged them and by the time they were hot they were damaged.

“I was really uncomfortable, inconsistent and couldn’t get a feel or confidence in the car. After that, I was already looking forward to a difficult stint on the medium tyres but had no problem switching them on.

“I think we had some pace to at least go with Mercedes and sometimes put some pressure on. It was crucial to keep third, crucial for Charles to get the fastest lap and snatch it away from the Mercedes boys. Still, plenty of work for us to do but we need to maximise what we can.”

Next up was Max Verstappen, fourth in the Red Bull and looking bullish for a podium until the VSC intervened, when the track went green grip on the RB15 went AWOL and the Dutchman sensibly brought the car home with little fuss

That’s how the top four started and that’s how they crossed the finish line a couple of hours later. A stalemate at the top.

Verstappen said afterwards, “I lost a bit of time behind Perez but you don’t want to risk it in lap one. Afterwards, the pace we showed on the medium tyre was good because up until the VSC we were catching like seven or eight seconds.”

“But after the VSC we just didn’t have the grip or tyre temperature and that’s key around here. I couldn’t push anymore so decided to bring it home.”

Charles Leclerc was the joker in the pack, starting with the harder tyre from eighth on the grid to finish fifth.

Although he led at some point when the majority pitted for tyres Ferrari kept him out far too long, fed him out behind Pierre Gasly (in the much slower Red Bull) and again messed up a possible podium for the Monaco Kid. And not for the first time this season.

Later in the race they pitted him late for a stab at fastest lap which he took. But another afternoon for him that was muddled by strange pitwall calls by his team. Nevertheless, he was voted Driver of the Day for his efforts.

Later Leclerc told reporters, “To be honest I believe there is a reason we stayed out so long I need to look at the data before I make any comments, overall I felt we lost a bit of time. I actually asked is there any possibility to come back – they told me no – so from that point onwards it wasn’t to push it was to save the tyres and get the fastest lap when the opportunity came. We had no chance to come back in front.”

“I think that on the mediums we were very strong and basically if you look at the leaders they did the longest stint on the mediums. It could’ve been a positive race for us. There is nothing wrong with the team, it’s just my mistake yesterday which I have put myself down enough for… I will come back stronger.”

Sergio Perez delivered another solid weekend for Racing Point to finish Best of the Rest in a comfortable sixth place followed by McLaren duo of Carlos Sainz and Lando Norris in seventh and eight respectively. A strong weekend for the Woking outfit.

Lance Stroll did well to turn around a disappointing couple of days to finish ninth, again showing his prowess in races of attrition.

The final point went to Kimi Raikkonen who started from the pitlane to finish tenth for Sauber.

Surprisingly, despite the notorious layout of Baku Street Circuit, the early laps were bent metal free.

The first incident happened when Daniel Ricciardo out-braked himself when trying to overtake Daniil Kvyat, the Renault went straight and Kvyat had no option but to turn late to avoid contact.

The Toro Rosso could not turn back onto the track while the Renault driver, unsighted, reversed and clattered into Kvyat. The pair DNF-ed a little later. The FIA stewards handed the Australian a three-place grid penalty which he will serve in the next race.

A virtual safety car was deployed late in the race when Pierre Gasly coasted to a halt with a technical issue. Around the same time, Romain Grosjean parked the Haas with brake issues.

When the lights went out at the start, pole sitter Bottas was immediately put under pressure by Hamilton who made an excellent start. The Finn defended well through the first few corners, however, and managed to hold his lead as the field swept up towards the Baku’s Old Town.

Vettel held his starting third place, but behind him fourth-on-the-grid Verstappen was jumped at the start by Pérez. Verstappen quickly responded and within a few laps he had closed up behind the racing Point’s gearbox. On the long pit straight, and under DRS, he blasted past the Mexican on entry to Turn 1 to reclaim fourth place.

Behind them Leclerc was on a march. At the start, on medium tyres, he had dropped back to P11 but by lap seven he had worked his way back up the order to sit in P5, two seconds behind Verstappen. And on lap 10, the Ferrari driver took advantage of DRS and his now better-performing medium tyres to pass Max on the pit straight.

Like Leclerc, Gasly had also started on medium compound tyres, though from the pit lane, due to penalties from earlier in the weekend. As soft-shod rivals around him pitted, the Frenchman was boosted up the order. He also maximised the opportunity the mediums gave in terms of performance and by lap 13 he had climbed to sixth place.

Vettel was the first of the frontrunners to make a pit stop, on lap 11, and the German’s move triggered a response from the other soft tyre starters at the front of the pack.

Verstappen was among those who dived into the pit lane, the Dutchman emerging in P6 behind his team-mate. He quickly closed on Gasly, and with the drivers on different strategies, the Frenchman sensibly moved across to put Verstappen in P5 once more.

At the halfway point of the 51-lap race, Leclerc, who had yet to stop, now led Bottas by just three seconds. Hamilton was a further 3.5s second back with Vettel three seconds behind the champion.

By lap 31, Bottas was just 1.1s behind leader Leclerc who was now holding the Mercedes up before his stop. That allowed Vettel to stay in touch with Hamilton and the German sat three seconds behind the champion.

Bottas finally made his way past Leclerc on lap 32, and was swiftly followed by Hamilton and Vettel. That was the cue for Ferrari to pit the Monegasque driver. He dived into the pit lane on lap 34 to take on soft tyres.

He rejoined in P6, behind Gasly. The Red Bull driver defended well for a couple of laps but on his ageing medium tyres there was little he could do against the Ferrari man and on lap 36 Leclerc, armed with fresh tyres and DRS got past.

Gasly was sixth again but with 30 seconds in hand over Pérez, looked safe for another solid points haul. It wasn’t to be however. On lap 39, he suddenly slowed dramatically and coasted off into a run-off area, his race ended by a mechanical issue.

The Virtual Safety Car was deployed and when the track went green again, Bottas was firmly in control, three seconds clear of Hamilton, who was in turn 2.3 ahead of Vettel. Hamilton closed but with two laps to go he made a mistake and ran wide, handing Bottas his second win of the season.

Max took his third fourth place finish in a row ahead of Leclerc who grabbed the point for fastest lap after pitting for a new set of soft tyres in the closing stages.

Perez took sixth place for Racing Point, while McLaren saw both Carlos Sainz and Lando Norris in the points in P7 and P8 respectively.

Racing Point also saw both its drivers score with Lance Stroll in P9. Kimi Räikkönen took the final point, having started from the pit lane. 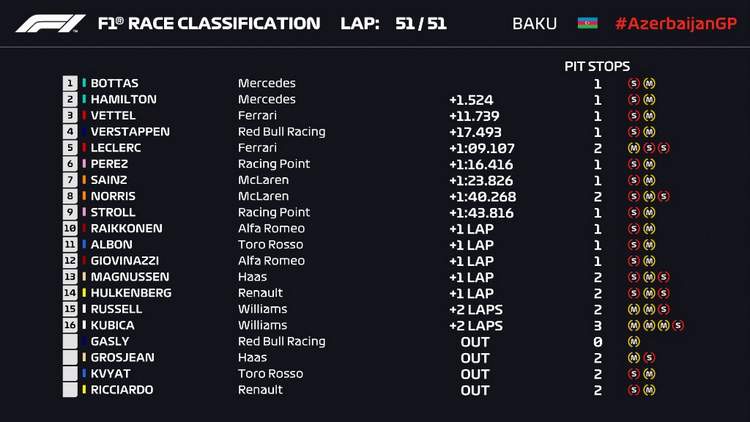 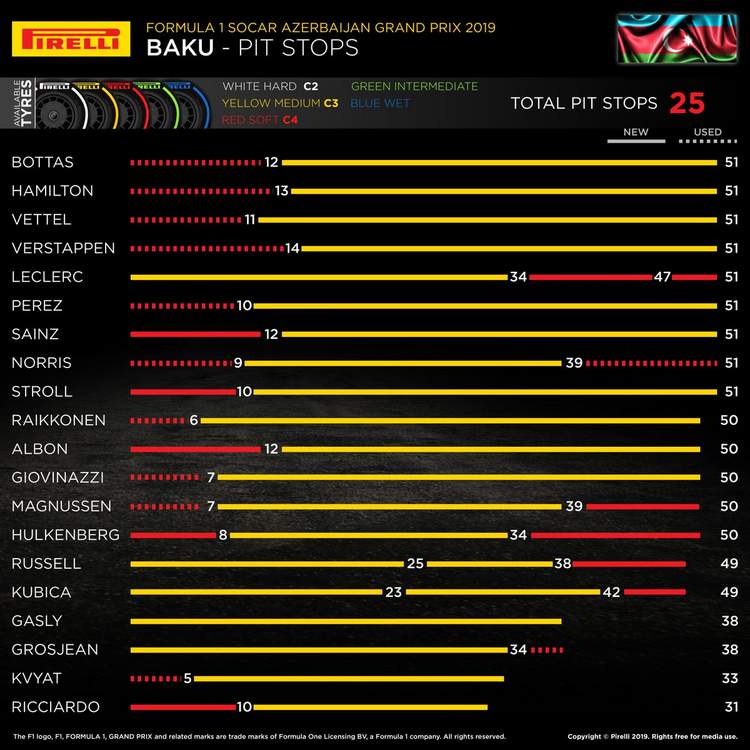 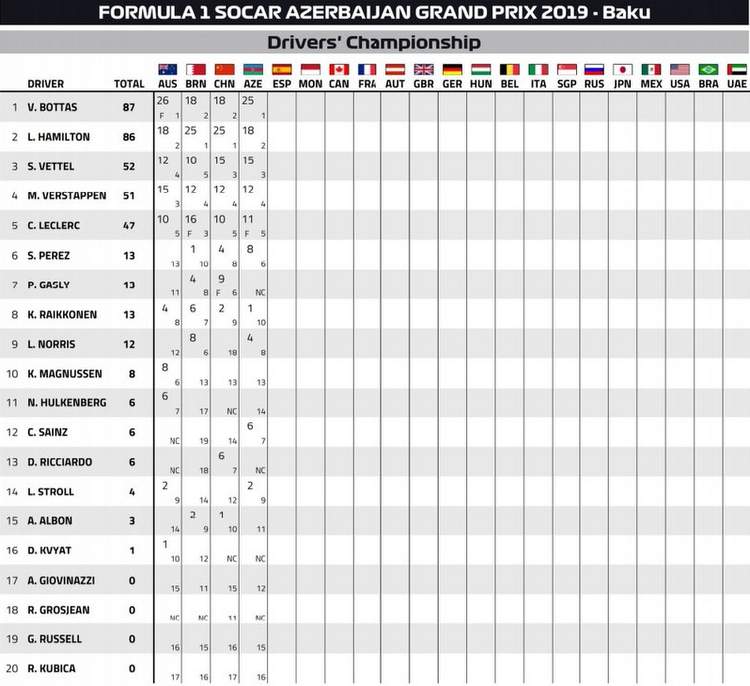 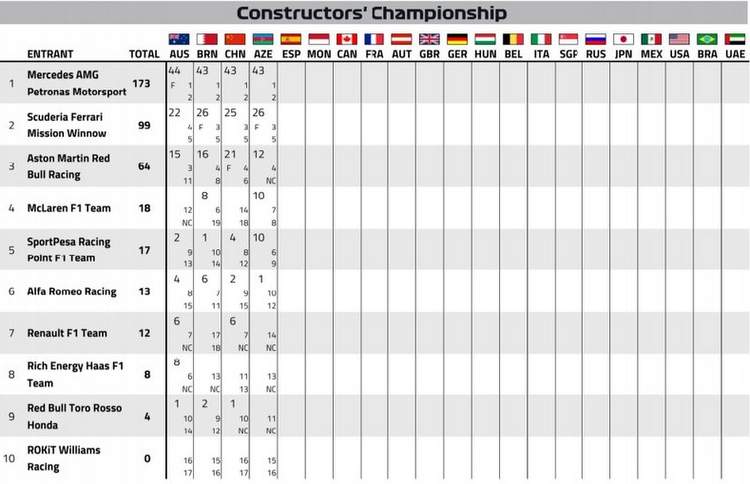