From Luca’s Desk: Drama almost a certainty for the race 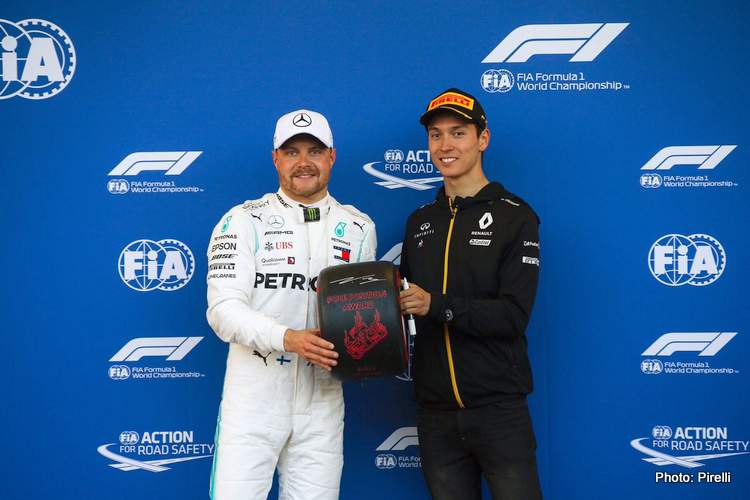 Formula 1 Media chief Luca Colajanni looks back on an incident-packed qualifying day for the Azerbaijan Grand Prix, in which Mercedes driver Valtteri Bottas surprised all by snatching pole position for the race in Baku from out of the blue and in defiance of all predictions.

There was no shortage of thrills and excitement during qualifying for the Formula 1 SOCAR Azerbaijan Grand Prix 2019. Coming out on top at the end of the session that lasted just short of two hours and which finished not long before dusk was Valtteri Bottas.

The Finn thus took his second consecutive pole, following on from the one he secured at the 1000th Grand Prix in China. It was a strong showing from Mercedes AMG Petronas Motorsport as Lewis Hamilton was second. Only 59 thousandths of a second separated the two team-mates, with Bottas just getting the upper hand thanks to a fantastic final lap in 1.40.495, to which only the reigning world champion was capable of getting close.

Therefore, for the third time this season, we have a Mercedes front row lock-out. On paper, it’s the best possible way to aim for a fourth consecutive one-two finish of the year, but the Baku City Circuit is notorious for throwing up completely unexpected scenarios.

In fact, only once, in 2016, when the race was known as the Grand Prix of Europe, has the pole man been first past the chequered flag. For the record, the honour went to Nico Rosberg on that occasion.

Therefore, those behind the front row tomorrow should have plenty of room to manoeuver, especially Sebastian Vettel and Max Verstappen. The German was third fastest in 1.40.797 and he is really in with a fighting chance given the potential shown by Scuderia Ferrari Mission Winnow this weekend.

In fact, it’s worth pointing out that Vettel’s team-mate, Charles Leclerc looked to have pole position within his grasp up until the moment he made a mistake in Q2, ending up hitting the barriers hard at Turn 8, thus ending his dream of repeating his Bahrain GP pole.

It was a real shame for the youngster from Monaco, who will still start from ninth, as his first timed lap in Q2 was already good enough to make the cut to Q3. He will also be the highest placed driver on the grid to start on the Medium tyres rather than the Softs.

Judging by their performance this afternoon, Aston Martin Red Bull Racing can also aspire to a podium finish. Pierre Gasly was fastest in Q1, while Verstappen was quickest in Q2 and then had to settle for fourth in the grid with a time of 1.41.069.

They were clearly making the most of the updated Power Unit introduced here by Honda. It was a shame for Gasly, who will have to start from pit lane, penalised for failing to stop at the FIA weighbridge yesterday in FP2.

Sergio Perez seems to be building a reputation as something of a Baku specialist. He lines up for the SportPesa Racing Point F1 Team on the third row of the grid in fifth place, courtesy of a lap in 1.41.593 on the only track where he has twice tasted the champagne, having come third in 2016 and last year, the only driver to claim two podium finishes in the Azerbaijan capital.

Alongside him will be Daniil Kvyat (Red Bull Toro Rosso Honda, 1.41.681,) who has not featured in the top six on the grid since the very first running of this race back in 2016.

Lando Norris is seventh in 1.41.896, giving McLaren its first top ten grid placing at this event. Antonio Giovinazzi was an impressive eighth quickest (1.42.424) for Alfa Romeo Racing, outpacing his teammate Kimi Raikkonen, ninth in 1.43.068. However, the Italian is using his third electric control unit which incurs a ten place penalty on tomorrow’s grid.

Therefore the top ten is completed by the other McLaren, driven by Carlos Sainz, who missed out on Q3 by just 17 thousandths, by the aforementioned Giovinazzi.

Leclerc was not the only victim of Turn 8. Q1 had to be red flagged for a long time after Robert Kubica had hit the barriers there. Like the Ferrari man, the Polish driver emerged unscathed from the cockpit, apart from the hurt of knowing he paid a high price for his mistake.

It’s really difficult to make any predictions for tomorrow’s race, given how previous races here have gone and also in light of today’s FIA Formula 2 Championship Feature Race, which saw two Safety Cars and one Virtual Safety Car.

In theory, this is a normal one-stop race, whether a driver starts on the Softs or the Mediums, however events on track could turn that on its head. Remember what happened in 2017, when Daniel Ricciardo won having started tenth, joined on the podium by Bottas, who at one point had been last and lapped and a rookie in the shape of Lance Stroll.

In the aforementioned F2 race, Jack Aitken proved unflappable as he sealed his first ever Feature Race win in chaotic circumstances, which also earned him the right to present Bottas with the trophy tyre for the Pirelli Pole Position Award.

The Campos driver remained composed and surged through the pack, to steer clear of the drama playing out behind him, finishing ahead of ART Grand Prix’s Nyck De Vries and MP Motorsport’s Jordan King. For a few laps, the race was led by Tatiana Calderon, the first woman to race in Formula 2. Aitken is now third in the championship on 33 points, 6 less than Luca Ghiotto in second and 14 down on the leader Nicholas Latifi.

Racing will recommence tomorrow in the Sprint Race, as Juan Manuel Correa starts on pole in the reverse place grid, with further drama almost a certainty on this unpredictable Baku City Circuit.