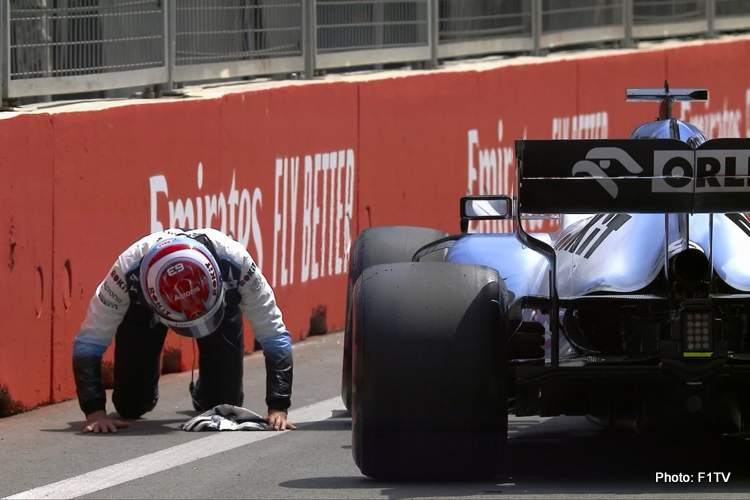 The Williams of George Russell’s suffered significant damage after he ran over a drain cover, shattering carbon fibre all over the track early in the first free practice for the Azerbaijan Grand Prix.

The opening session was cancelled before any serious laps were possible and hardly any drivers had emerged from the pits.

Russell’s car sucked up the drain cover as he went over it, ripping the underside of the car which forced the driver to stop the car. With repairs necessary, track action stopped.

Prior to luckless Russell slamming the cover, Charles Leclerc narrowly missed a similar incident with his Ferrari.

From then it was a comedy errors as things got worse for Russell’s car when it was being taken back to the pits. The truck carrying it hit a bridge and fluid from its damaged crane flowed onto Russell’s engine cover.

Russell told Sky TV, “I got the biggest smack through my body, the whole engine turned off, it’s ruined the floor and I’m a bit worried for the chassis now.”

“The session won’t be going green until it’s sorted. We were on the normal racing line and it’s completely ruined our session. It’s not what we need at this stage.”

Later the team reported on Twitter: “George’s car will require a chassis change due to the damage caused by the loose drain cover. Therefore due to regulations he will not be able to run until FP3 tomorrow.”

Team boss Claire Williams was understandably not happy, “It’s clear from the data and what everyone can see that there is a lot of damage to the floor of the car and who knows what else. We’ll need to wait and see until we get it back to the extent of that.”

“We’ll have to wait and see if that chassis is repairable or if we have to go to our third chassis. It’s clearly not what we want and it’s not what you expect from a Formula 1 track.”

“These drain covers are supposed to be bolted down. We’ll be picking that up with race control,” she added.

George Russell’s car gets damaged after going over a drain cover at #AzerbaijanGP FP1#F1 pic.twitter.com/xOfwLZtqGU