McLaren back at Indy 500 ahead of full IndyCar campaign 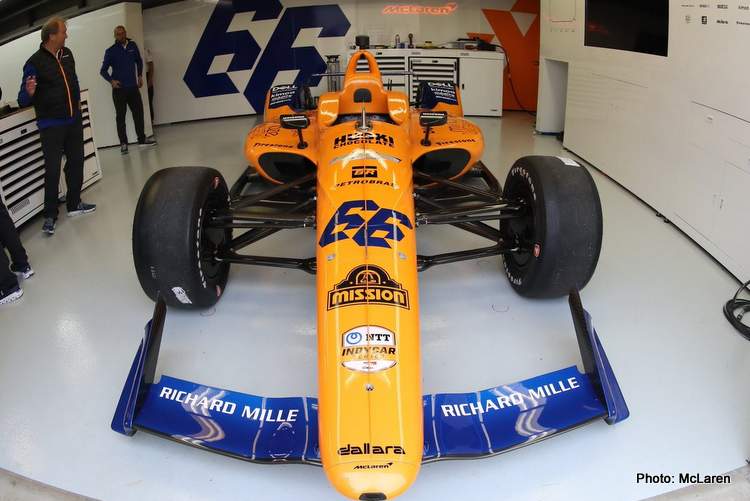 McLaren made the Indianapolis 500 its personal playground in the 1970s with three victories in 10 appearances, then the manufacturer was done, back to England with a focus on Formula 1 and no time for “The Greatest Spectacle in Racing.”

Fernando Alonso’s quest to win motorsports version of the Triple Crown has sparked a renewed interest in Indy for McLaren, which has entered next month’s race while exploring an eventual full-time entry in IndyCar.

McLaren and its trademark papaya orange car will be back on the track at Indianapolis Motor Speedway on Wednesday for a test, the first time the team has been an official participant for the 500 since Johnny Rutherford won in 1976.

Alonso had McLaren’s support in his 2017 Indianapolis 500 debut, but he drove for Andretti Autosport and McLaren as a team carried little responsibility. This May, the entire effort will be from McLaren.

“It’s definitely more nerve-wracking than when we did it with Andretti,” said McLaren Racing CEO Zak Brown, an American and former Indianapolis resident.

“Michael did everything and you knew it was going to be a mega car. We’ve started this thing from scratch. We built the cars ourselves, put the team together, and they’re all experienced guys, but we’re rookies.”

It is a tremendous undertaking for McLaren, which desperately does not want to embarrass itself or Alonso. The two-time Formula 1 champion has wins at Monaco and Le Mans on his resume and adding the 500 would allow him to join Graham Hill as the only drivers to complete the sweep.

A fallout in F1 with engine supplier Honda hurt Brown’s bargaining to get Alonso back with Andretti or another established team, and Roger Penske wasn’t interested in adding the Spaniard to his Chevrolet lineup. But Chevy was willing to give Alonso an engine, so Brown decided McLaren would go ahead and enter Indianapolis on its own.

Brown picked a team of McLaren employees and they built Alonso’s car at their England headquarters and shipped it to Indianapolis for Wednesday’s session.

Alonso was on the track earlier this month for a day of testing at Texas Motor Speedway in a different car, built by IndyCar team Carlin as part of a technical alliance McLaren struck to ensure it is properly prepared. That car will be Alonso’s backup next month.

“All the people that are on the (Indy) team put their hand up and said, ‘I really want to go to Indy,’ so there’s a lot of enthusiasm,” Brown said. “We’re taking it on. We’re doing it ourselves.”

Alonso, following a full day at Texas in which Rutherford was on hand to observe, said he is confident he will have a solid entry from McLaren. He led 27 laps in the Andretti entry in 2017 and might have been in contention to win had his engine not expired 21 laps from the finish.

His previous appearance exposed him to the enormity of the event, and Alonso said he is ready to go.

“I feel quite a lot more prepared. I know the race, the atmosphere of the 500, the drivers’ parade, I know the formation laps. I know a lot of things that you spend energy on your first time there because everything comes as a surprise,” he said.

“I think that energy, I can save it now. I know how it goes, so I can go into the rhythm of the race, come into qualifying with a little bit more energy and more concentration.

“I don’t want to take for granted anything. I want to review every single race from the past, start from zero with engineers and everything. I want to make as much preparation as possible.”

The attention will be on Alonso, who captivated the audience and proved to be a popular addition to the field two years ago. But scrutiny will be on McLaren and its preparation for a fulltime IndyCar entry.

McLaren announced last week it will enter a sports car in IMSA next season, and Brown believes its deliberate approach has allowed the F1 effort to improve even amid expansion to different series.

“We wouldn’t have gone to the effort we’ve gone in buying equipment and doing what we’re doing if we did not have an intention to get in (IndyCar) at some point,” Brown said. “I don’t know if it’ll be (next year). I think it’s more of a when than an if we all want to do it.”