Perez: Lawrence is the most motivated person in our garage 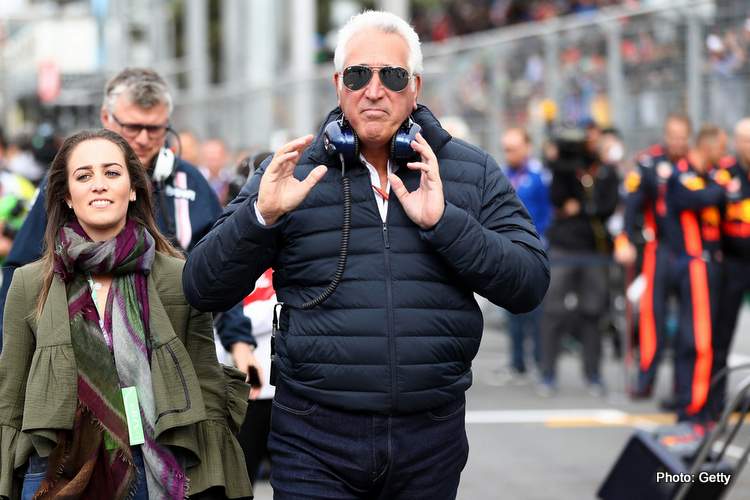 The demise of Force India last year led to the birth of Racing Point, gone is mayhem of the Vijay Mallya days of uncertainty replaced by the big bucks investment by billionaire Lawrence Stroll and a group of investor pals.

It is no secret that Stroll senior bought the Silverstone team because his son Lance was struggling at Williams, the once mighty Grove outfit at the lowest point in their history had relegated the young Canadian to back of the grid frustration.

Lawrence saw no light at the end of the Williams tunnel and decided to do things his way and, by all accounts, the man who made billions in the fashion business is more motivated than ever to make the investment work.

Also enthused by the winds of change blowing through the team HQ, is Sergio Perez the veteran driver kept on for stability and consistency as the Strolls moved in and took over.

Speaking on the Beyond the Grid podcast, Perez said of Racing Point’s new boss Lawrence,  “He’s very enthusiastic, probably the most motivated person we have in the garage right now. He says this project has motivated him the most in his whole life.”

“He gets up at six in the morning and he’s flat out trying to go through everything. He is pushing the team very, very hard but at the same time is letting Otmar [Szafnauer] and the big boys to do their job. But we are all aware that we have to give the results sooner rather than later.”

According to Forbes as of February this year, 59-year-old Stroll was said to be worth $2.6-billion.

He clearly has racing in his blood, as he boasts one of the most extensive Ferrari collections in the world, and also owns the iconic Circuit Mont-Tremblant in his homeland. Also, well known is the fact that he spared no expense in getting his son from karting through to F1 and everything in between.

Perez continued, “In that respect that I think [Lawrence] loves racing and I am surprised with his energy, how much he loves it and how much he wants this team to be successful. He obviously wants his son to be very successful, which is in my benefit because he is putting all the resources in place to achieve this.”

Invariably the question of nepotism arises, after all never in the colourful history of the sport has a father bought an F1 team (!) for his son to prove his worth – this is uncharted territory for racing at this level.

But Perez is not concerned, “Lance is just a normal guy, a normal driver who works very hard and is also very talented. I have a very good relationship with him. We work well together and we are trying to push the team forward.”

Asked if he felt he might be compromised at some point, the Mexican replied, “No. I feel so much part of this team and of this family. We are all in the same boat together and we all want to be successful, we want to bring the team forward. I don’t think this will happen in my case, to be honest.”

The Strolls will probably look at the current Williams shambles and thank their lucky stars that they bailed out when they did, but the transformation to Racing Point was not plug-and-play as the organisation appears struck by some sort of Force India hangover. Consequently, the results of the first three races of the season have hardly been inspirational.

The veteran of  158 Grand Prix starts believes he is also in a better place personally, “In the past, [with Force India] there has always been single year contracts, for example, 2015 and 2016 I was close to leaving… 2017, always I’ve been really close to leaving.”

“But right now, this is the project I want to be a part of you know. I want to grow and go to the next step together. In the past, there were always doubts if we were going to make it until the end of the season; when we were going to get the upgrades and so on, but now it’s just a matter of how are we going to get in among the top three teams.”

With a state-of-the-art factory being planned, the future is rosy for the Pinks and the 29-year-old from Guadalajara plying his trade in the Stroll family business.

“It’s more than the looks, it’s the quality of the people and the amount of time that this takes. Things in F1 they take a while,” added Perez.

Big Question: Can Racing Point become a force in F1 to match the top three teams?