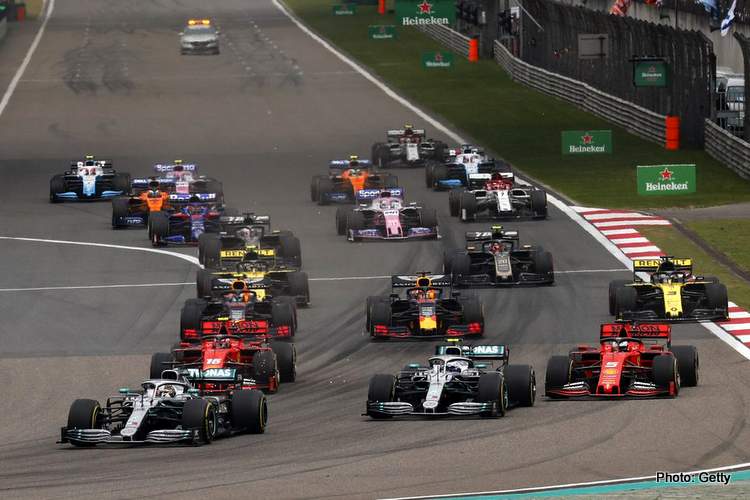 Now that the dust has settled after an intriguing weekend in Shanghai which finally revealed the pecking order to many fans, pundits and media outlets who simply got their predictions wrong ahead of this season.

While the ‘conventional’ wisdom after preseason testing was that Ferrari were ahead, with Mercedes in trouble, Red Bull looked close and Renault appeared not too shabby.

But in Australia, those same pundits and fans who predicted Ferrari would massacre their rivals were almost silenced when the Silver Arrows bagged a one-two at the season opener. “An anomaly” they cried.

And so off it was to the desert two weeks later, and under the spotlights of Bahrain again the World Champions stormed to another one-two. Again the excuses were: “You never know with Bahrain…”

But it took qualifying in China to shut up the naysayers to what this site has predicted all along: Mercedes have the upper-hand, perhaps with the biggest advantage they have ever enjoyed so early in a season and, most concerning, is they are sure to have more to squeeze out of the remarkable package that is the W10.

Taking for granted that for Shanghai qualifying everyone turned up their PUs to the max, with Q3 revealing the true pecking order on the day. So much so that on Sunday the front row was all silver, row two all red, row three all blue, row four yellow, row five black and beyond that the rest.

When Merc turned up the wick for Australia, Lewis Hamilton claimed pole by an astounding seven-tenths over the next best team. In China, almost a month later Valtteri Bottas’ pole-winning effort was three tenths up on the best Ferrari could conjure with Sebastian Vettel at the wheel.

The World Champs are more than capable of developing their car like no other team, coupled to their tendency to be overcautious when hitting the ‘party mode’ button, it would be fair to say that the three-tenths gap in Shanghai is the minimum.

For the record, I  would hazard a guess and say that the gap is still around the three-quarter second mark, but for this exercise, my simple maths is based on times set during qualifying in China.

Before the season started Down Under, everyone (including Mercedes) believed the hype that Ferrari had something special until reality finally sank in on Saturday afternoon.

Up to that point they supposedly believed their own spin, even when in Melbourne and Manama it was clear their piece of kit was again no match for the Silver Arrows.

Ferrari need to find a solution to improve their package with immediate effect, while they toil away at Maranello to find half a second or more, it is sure that their rivals will not be standing still.

After three rounds the Reds are already 57 points adrift of the leaders in the constructors’ championship, each time they don’t win going from Baku onwards it will only add to the pressure and we know how the Scuderia handles that.

Helmut Marko’s February predictions that Ferrari led the way comfortably with Red Bull next and Merc following chasing to be quite the opposite in reality and laughable in retrospect. The Blues are about half a second shy of what Mercedes showed last Sunday and two tenths down on Ferrari.

Honda have promised another 20 horsepower for Baku and they will need every one of them to stay in the hunt for a podium or to challenge for wins, while they lag a couple of tenths off the Reds.

The problem they have is that only Max Verstappen is capable of maximising what they have for him, while Pierre GHasly struggles to come to terms with his first Red Bull F1 car.

“Disappointing” sums up Renault’s start to the new season, they are 1.4 seconds shy of what Mercedes have on every lap, last year the gap in qualy, in China was almost identical. No progress from the French marque who were targeting podiums this season.

That dream is still miles away and will only happen if something happens to any of the top six. in other words they are likely to get the first crumbs off the Big Three buffet if their cars survive races days..

Notably, last year Red Bull were seven-tenths off the top time using Renault PUs, this year they are two-tenths closer while Renault have stood still.

Whatever way you look at it Renault are also fourth in the PU pecking order, with reliability an issue that has plagued both works cars. Worrying times.

Once again the Haas outfit, or mini-Ferrari if you like, are the surprise package. They have a handy car and the results show. Some suggest that American outfit will be a testbed for special Ferrari bits, while the Reds have an agreement with their clients that they can run a higher spec engine should they require.

Whatever the case Haas are sure to benefit from a close relationship with their engine supplier, at the same time they can confidently target Best of the Rest, ahead of Renault, come the end of the season.

The back of the midpack is very tight. In China about three-tenths covered all eight drivers. All teams are also a tenth down on Haas on a good day, a development breakthrough could push any of them up the pecking order. Toro Rosso and Alfa Romeo look most likely.

The Red Bull junior team has delivered a decent package for their drivers Alex Albon and Daniil Kvyat, they could be the surprise of the season, while the former Sauber outfit have been dogged with niggles but once sorted they too have a handy baseline from which to improve on as the season progresses.

Racing Point are suffering something of a Force India hangover and their results have been disappointing this season so far, but heading to Baku where they finished on the podium last year optimism is warranted.

The factory has performed miracles in the past, expectations are they will recover and come out boxing above their weight once again. Right now the script is not how billionaire Lance Stroll would have written it.

McLaren are nearly below this group, but the jury is out on how good or bad their car is. In Australia, it was mega in the hands of their rookie Lando Norris but in China they were off the boil.

Carlos Sainz’s best effort on Saturday was only good for 14th on the grid but a massive 2.1 seconds off pole. For now, they have the benefit of the doubt, but in Baku there is nowhere to hide.

Williams! How the mighty continue to fall. Poor George Russell who a week prior to China topped the timing sheets when Mercedes gave him a shot in the pace-setting W10 only to return back to no-mans-land where his team currently plod along in crisis.

Last year this time the Grove outfit struggled as Paddy Lowe and his technical team produced the worst car in the team’s history. In China, they were a miserable 2.9 seconds down on the prime time. They knew they had a big problem.

But under Lowe the clearly procrastinated and somehow managed to conjure up a heap that is even worse than last year’s beast. And then the guy who caused all the shit does a runner! The team is now left in limbo with no light at the end of the tunnel.

Big respect for Sir Patrick Head for what he and fellow knight Frank Williams achieved with their team. But that was then and this is now. Fast-tracking the former captain to steer the ship after it has hit the iceberg makes for feel-good headlines but what can he really do?

It is painful to read the press releases they are forced to churn out amid the mayhem, where finishing the race is hailed as a triumph. When a couple of tenths here and there are hailed as an improvement becomes a joke when that gap is north of 3.5 seconds per lap.

The purpose of this piece? Unlike most websites, broadcasters, teams and officials the Ferrari hype did not convince me. It never does. For as long as I can remember they were always ‘winning’ the preseason world championship only to disappoint mostly. Why would this year be different?

But that’s F1. Only in this day and age are we obsessed with close racing, different winners etc. That’s not what this sport has been about. Teams have dominated, and there have been countless snoozefests. Of the 1000 races more were dull than not.

Sure we all want close championships decided in the last round, but as they extend the seasons this will be virtually impossible. The more races the less chance of a season finale decider – simple maths.

And honestly, I don’t see Mercedes being stopped any time soon, no matter what, as long as the current PU formula exists.

But that still leaves us with the intriguing sideshows which in the end are what fuel the legend of F1, namely the teammate rivalries that have and will continue to serve us well this year. But that’s a story for another time.

This is what Karun Chandhok revealed with his clever-maths:

Morning! Qualifying form guide post China… Ferrari and RBR further behind Mercedes compared to 2018. Mid field is unbelievably close – the top 9 teams are covered by a similar gap as the top 5 last year and collectively closer to the top teams. #F12019 pic.twitter.com/yRlRFjEdFl