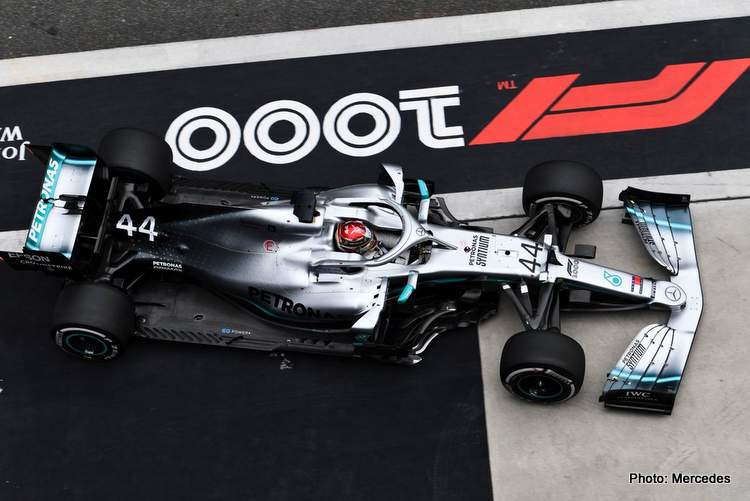 Lewis Hamilton may have taken the 1000th championship race in Formula 1 history, but all eyes were once again on Ferrari after a dismal showing in Shanghai.

Say what you will about Ferrari so far this season, credit where it’s due: they really know how to hog the headlines.

Lewis Hamilton and Mercedes were utterly dominant on Sunday, and yet the biggest story by far is the hullabaloo surrounding Ferrari’s ill-fated decision to swap Charles Leclerc and Sebastian Vettel.

Maybe the Scuderia have been misinformed that this year’s championships will be decided not on amount of points, but column inches. More likely though, this was the case of a team that once again found itself slightly wide of the mark, and in so doing has further opened itself to external scrutiny and internal discontent.

At least in a vacuum, the swap itself can’t be considered that controversial – all F1 teams (and Ferrari in particular) will swap cars when the occasion calls for it – but this being Ferrari, and it backfiring so considerably has only served to highlight both their ongoing struggles with consistent pace and driver politics.

Indeed, if Vettel had managed to gain on Valtteri Bottas after the swap, there wouldn’t be much of a story, yet the SF90 looked as toothless with Vettel on the charge as with Leclerc, and in so doing made it looked like Mattia Binotto and co. sacrificed the Monegasque’s race just to reaffirm the former’s number one status.

That said, you can certainly argue Vettel’s marginal pace-difference was enough to make the call at the time, but it was then very curious that Binotto went out of his way to placate Leclerc in his post-race comments. If it was simply a case of Vettel being faster, why not just literally say that? The way he worded it, it’s still reasonable to believe Binotto made the call based not on what was ahead, but on what was behind, and who to sacrifice with Max Verstappen and the undercut looming.

Regardless of the way you interpret it, the only things that are clear are that one: the car isn’t good enough, and two: Leclerc isn’t happy. Considering where they stood after testing – and even after Bahrain – that shouldn’t be the case, yet here we are, and all the while, Mercedes are laughing.

Ferrari drama aside, there’s no denying Mercedes deserve a ton of credit. These last two days have been a very ominous display from the Silver Arrows, and that double-stack was flawless.

Another race, another power unit failure for Renault, with Nico Hulkenberg’s MGU-K deciding to call it quits early. What will happen first I wonder, a Ferrari victory or two Renaults seeing the flag?

Essentially living history at this point, it was only fitting race 1000 gave us some classic Kimi Raikkonen, showing he’s still got it with some nice moves on his way to a P9 finish. I can’t wait to see how he fares against his fellow robots in race 2000.

Driver of the Day: Alexander Albon

From a pit lane start to a P10 finish, the young Thai showed some serious ability and mental toughness. I wonder if Helmut Marko – and Pierre Gasly – took notice?

Off the pace all weekend and with driver discontent that increasingly threatens to surface, it’s a particularly unhappy time at the Scuderia.

“I knew the moment [the swap] was happening that I would have to face these questions. Not sure I want to answer because I’m a little bit against the way you – all of you – work because you take bits out of answers here and there and put it into the wrong light.” – Seb Vettel, apparently a big fan of our work.