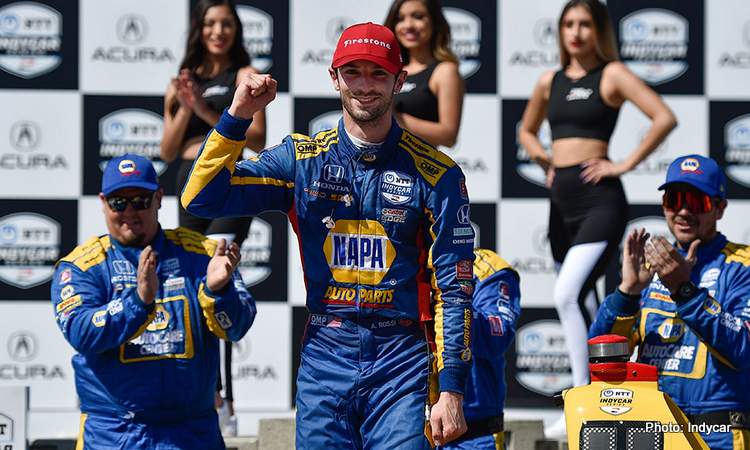 Al Unser Jr. may be “King of the Beach,” but Alexander Rossi is driving himself toward Indycar racing royalty at Sunday’s Acura Grand Prix of Long Beach.

For the second straight year on the iconic NTT IndyCar Series street course, Rossi dominated the competition. The Andretti Autosport driver led all but five of 85 laps from the pole position Sunday to become the first back-to-back winner at Long Beach since Sebastien Bourdais won three in a row from 2005-07.

“We were able to get a race car I was really happy with,” Rossi said. “Winning the pole is huge come Sunday because it allows you to hopefully be in front leaving Turn 1 and really just control the race from there.

“It’s awesome to be able to really kickstart our year.”

Alexander Rossi drinks champagneFour of Rossi’s six NTT IndyCar Series career victories have now come when the 27-year-old Californian started from the pole position. Sunday’s win also moved him into second place in the 2019 championship standings after four of 17 races, trailing Newgarden by 28 points, but he said it was no day at the beach.

“I think we got lucky that we were able to get through some traffic and Josef was held up for a bit,” Rossi said. “From that standpoint, we were able to build a gap. It’s never easy. We didn’t have a whole lot of pressure … but you still have to go quick, right? There are a bunch of really fast guys behind you, so you can’t relax at all.”

Rossi became the fourth NTT IndyCar Series driver, each from a different team, to win in as many races this season. He also delivered Andretti Autosport its 200th race victory in all disciplines in which the team has competed since its 2003 inception. Sixty-three of those wins have come in NTT IndyCar Series competition.

“I’m so proud of what we’ve been able to accomplish in I think a short period of time, to get to 200,” Michael Andretti said. “We’ve had so many great people help get us there. I was just told we had 38 different drivers that won for us over the years to get us to this point.”

Andretti had high words of praise for Rossi, the driver who picked up win No. 200.

“I think he’s a great driver,” Andretti said. “I think we saw in him from the moment he sat in one of our cars, we knew we had someone special here. He’s been great to have as a part of the team.

“He drove flawlessly all weekend. That lap he did (in) qualifying, I think, was the difference as well. To be able to start on pole here is a big advantage.”

By finishing second in the No. 2 Hitachi Team Penske Chevrolet, Newgarden scored his fourth top-four finish to start the season. Starting fourth, the 2017 NTT IndyCar Series champion leapfrogged to second place during the first round of pit stops and remained there the rest of the day.

“It’s tough when you’re not able to compete at the very, very front,” Newgarden said. “We were at the front, but you want to be competing for first (place). That’s disappointing, but we gave it our all today and thought we had a pretty good race for the most part. … We just were a little short.”

“It was unfortunate with the Graham Rahal incident,” Dixon said. “I think he overshot Turn 8 and then quickly tried to turn in reaction. The rule is you can’t come back to defend if somebody’s already there, and that’s what happened.

“It was just one of those things. Had he not reacted there, we would have (passed him) anyway. But it’s racing, hard racing.”

Rahal, driving the No. 15 TOTAL Honda, didn’t refute the decision. The INDYCAR rule for blocking states that a driver may be penalized for making a move in reaction to another driver’s effort to overtake.

The race on the 11-turn, 1.968-mile temporary circuit saw one full-course caution when the cars of Marcus Ericsson, Jack Harvey and Spencer Pigot made contact in the fountain area of Turns 2 and 3 on the opening lap. Ericsson was penalized for avoidable contact over the incident.

The focus of the NTT IndyCar Series shifts now to Indianapolis Motor Speedway. An April 24 open test on the 2.5-mile oval will allow teams and drivers scheduled to compete in the 103rd Indianapolis 500 presented by Gainbridge valuable track time. IndyCar.com will provide a live stream of the test.