Hamilton: I was just thinking how delicious that was 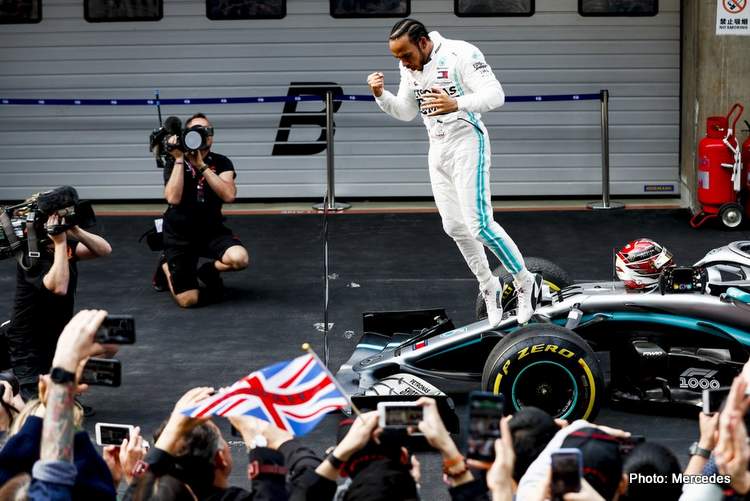 Five times Formula 1 world champion Lewis Hamilton returned to the top of the World Championship standings with a comfortable victory at the Chinese Grand Prix that ticked off two more milestones in an already stellar career.

The 34-year-old, already one of only three drivers to have won five or more titles, wrote another page in the record books as the winner of the 1,000th world championship race since the first in 1950.

“I was just thinking how delicious that was,” Hamilton, who also won the 900th race in 2014, told reporters after leading teammate Valtteri Bottas in a third successive one-two finish.

“It really has been an interesting first three races.

“We, as a team, definitely didn´t expect to have three one-twos, but now I´m proud to have been part of the work that everyone has done and to be a part of these results,” added the Briton.

Mercedes are the first team since Williams in 1992 to start a season with three one-twos in a row, Hamilton leading two to Bottas´s one.

Ferrari looked dominant in Bahrain, only to lose out on victory with Charles Leclerc due to an engine problem 10 laps from the end, and neither of the Mercedes pair expected Sunday´s result.

Even when it became clear the silver cars had the edge around the 5.4-km long Shanghai circuit, it was Bottas who was leading the charge by taking pole ahead of Hamilton.

Until race day, Hamilton had looked strangely ill at ease with his car.

The Briton sealed the win at the start, however, beating Bottas off the line and settling into a lead he would never give up.

“A little bit of a struggle this weekend for me, but once I got into qualifying, a little bit of a shift in driving style enabled me to unlock a bit more potential with the car which Valtteri was clearly able to do,” said Hamilton.

“And then the start was obviously great, which was really the decisive moment I´d say for the race.”

Hamilton is now six points clear of Bottas, who collected an extra point in Australia for the fastest lap, with the Azerbaijan Grand Prix next up.

The Briton struggled there last year before inheriting a lucky win from Bottas, who suffered a puncture with three laps remaining.

“I think as a team, we´re not going to get ahead of ourselves, and we´re naturally going to continue to get our heads down and keep working. We´ve got another close battle on our hands,” said Hamilton.

Big Question: Can anyone stop Lewis this year?