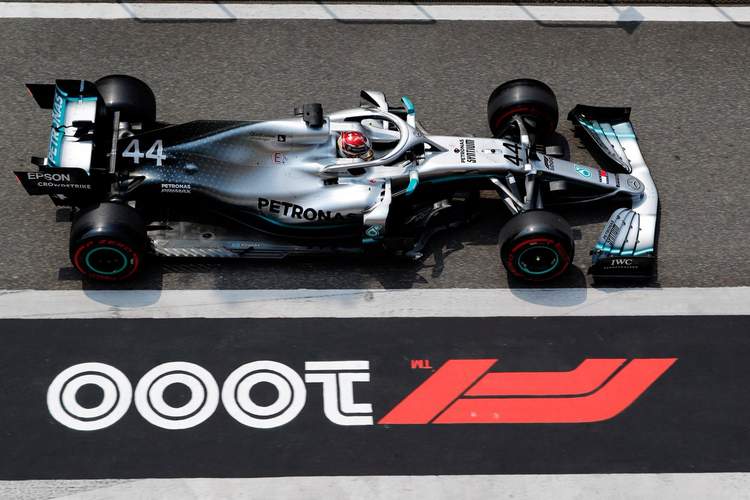 Formula 1 media chief Luca Colajanni looks back on the first day of track action in Shanghai and expands on the significance of the Chinese Grand Prix being the sport’s 1000th race.

This is what he had to say on Friday evening:

Track action during the first day of practice for the 2019 Chinese Grand Prix would seem to suggest that we are in for a closely contested weekend with no clear favourite.

Sebastian Vettel was fastest in the first free practice session for Ferrari, before Valtteri Bottas went quickest in the second one for Mercedes.

The Finn was fastest overall with a time of 1.22.330, beating Scuderia Ferrari German driver by just 27 thousandths of a second.

In theory, the final outcome might have gone in favour of the Maranello team, given that it was fastest in the morning, when both of its drivers used the Medium compound tyre to set their fastest times, whereas Mercedes AMG Petronas used the Softs for their best laps, but it is well known that the second session is more representative of the real pecking order down pit lane. In fact, in terms of pure race pace in the afternoon, Vettel and the Mercedes were very closely matched.

In other words, it’s all very close, especially as Max Verstappen ensured that Aston Martin Red Bull Racing is also in the fight, going fourth fastest in FP1 and third in FP2.

There’s a small question mark over Ferrari reliability: Charles Leclerc, who missed out on the win in Bahrain because of an electrical problem, was third in the morning, but only seventh in the afternoon, when he had to end the session early, while the team checked the cooling system on his car.

Reliability issues are also beginning to raise their head in other teams: Red Bull Racing Toro Rosso Honda had to change the power unit on Daniil Kvyat’s car after the morning session when an anomaly showed up on the data.

The substitution meant the Russian missed the first half of the second 90-minute session. Over at Alfa Rome Racing, Antonio Giovinazzi was grounded for all of FP1 because of a problem with the power unit.

Renault, having had problems in the first two races, has introduced an updated MGU-K on its own cars and those of customer team, McLaren.

This Sunday’s race is not only the third round of the 2019 FIA Formula 1 World Championship, it is also the 15th Chinese Grand Prix, but most significantly, it is the one-thousandth event to count towards the Drivers’ World Championship, the first global series, which began in 1950.

Therefore, there are all sorts of events and attractions taking place over the weekend to celebrate this extraordinary milestone. The most obvious was the giant logo designed specially for this event, on display in the paddock, while several drivers have also come up with a special helmet design to mark the occasion.

Today, in the paddock, two Formula 1 licensees presented special editions of their products, released to coincide with this Grand Prix. Rosland introduced special editions of its one-kilogramme gold coin, presented to two well-known names in the world of Formula 1, the journalists Giorgio Piola and Roger Benoit: they top the table for the number of Grands Prix attended, on 811 and 739 respectively.

Both men chose to dedicate their award to drivers who stood out in Formula 1 for their courage and talent: Giorgio to Ayrton Senna, while Roger singled out Niki Lauda, wishing the Austrian champion a speedy recovery from his recent health problems.

Automobilist unveiled the official poster for the thousandth Grand Prix, produced especially for the drivers, team principals and media here in Shanghai. 1996 World Champion Damon Hill was the guest of honour for this unveiling, along with the Lotus 49 car, which his father Graham drove to win the 1968 title. The car is also unique in being the only car to win the Monaco Grand Prix twice, the year in which it won the title and again in 1969.

Yesterday, another special single-seater was on display: the BAPE X F1, with its unique pink livery to celebrate an initiative delivered by Formula 1 and BATHING APE who have joined forces again to launch an exclusive Chinese capsule collection. The race-themed crossover collection is the latest go-to sportswear and all items will be adorned with the famous red F1 logo and ‘F1 1000’ to highlight the celebration of the 1000th race.

Tomorrow sees the highlight of the celebrations on the streets of Shanghai. While the 20 F1 drivers will be battling it out on track in the fight for pole position, the Heineken F1 Festival, which opened today in the Xintiandi part of the city, will host the first street demo to be held on a public road in China, thanks to the efforts of the Renault F1 team. Not only has it supplied a Renault-powered E20 F1 car, it has also entrusted the steering wheel to Guanyu Zhou, the Chinese Renault F1 Team Development Driver.

“We are pleased that Renault is one of the stars of the show,” said Sean Bratches, Managing Director, Commercial Operations at Formula 1 – “not only on track with Nico Hulkenberg and Daniel Ricciardo, but also in Shanghai where, for the first time ever, a Formula 1 car will be driven through the streets of the city, thanks to the efforts of the French car manufacturer.”

“It’s even more exciting to see the enthusiastic reception given to Guangyu Zhou, the first Chinese driver to have a role in a Formula 1 team. The youngster is also one of the rising stars of the FIA Formula 2 Championship.

It’s proof if proof be needed that this country has an enormous potential for growth in interest in Formula 1. Once again, Renault has shown its support for our efforts to make this sport ever more popular in all corners of the globe and especially to bring it even closer to its fans.”