Ferrari: A postive day but still homework to do 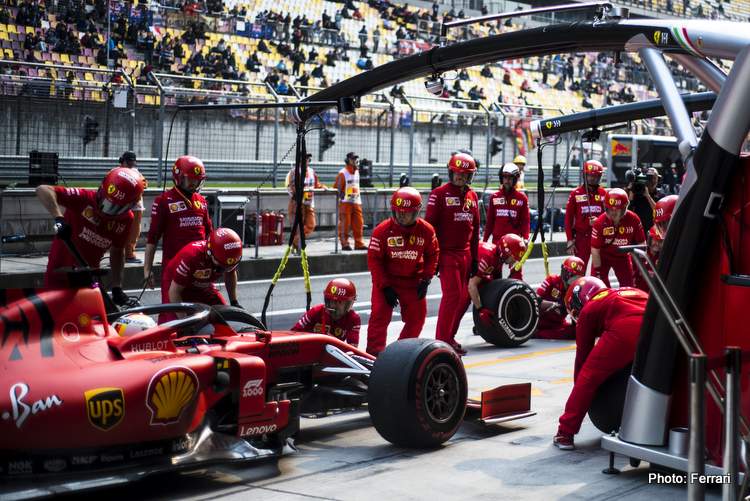 It was a busy Friday in China for Scuderia Ferrari, on the Shanghai circuit, Sebastian Vettel and Charles Leclerc worked fine-tuning the set-up for Saturday qualifying.

During the first free practice session, the two SF90s ran on the Medium compound tyres. Sebastian set a best time of 1:33.911 (19 laps completed) and Charles posted a 1:34.167 (21 laps). In the afternoon, the drivers tried the other two compounds. Sebastian Vettel did a 1:33.357 on the softest rubber, good enough for the second-fastest time of the day, just 27 thousandths off Valtteri Bottas. The German then did race simulation work with a high fuel load and the hardest tyres brought to China by Pirelli.

Unfortunately, Charles Leclerc encountered traffic when running the Soft tyres setting a fastest time of 1:34.158. The Monegasque driver was unable to go for his long run because the team opted to keep him in the garage to carry out checks on the cooling system of his SF90 as the engineers had raised doubts about it. Therefore Charles did just 13 laps, while between them the two cars totalled 86.

Sebastian Vettel: “Overall it was a positive day. We still have to do some homework, the picture is a bit similar to Bahrain, where we were competitive. There are some parts of the track where we are very strong and others where we still have to improve. I expect it to be very close tomorrow and also on Sunday, so it will be key to keep working to improve the feeling with the car.”

Charles Leclerc: “I got a good feeling from the SF90 today. There is still a bit of work to do in terms of the balance, but overall I’m pleased with the work we did. It’s a shame I wasn’t able to do a long run test, because it would have been useful for the race, but I’m not worried about that. We have all the information we need to do well and now, it’s just a case of putting everything together for qualifying, especially as I expect it to be very close between us and our competitors.”