Outside Line: Can Seb and Charles Continue to Play Nice? 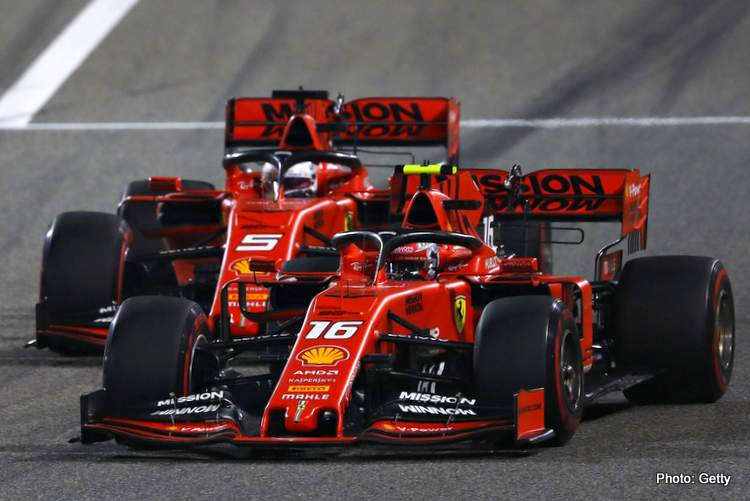 With Charles Leclerc having taken pole and openly flouted team orders in just his second race with the team, the signs are already there for teammate tension at Ferrari…

Two races into the season, it’s already time to have that conversation about Sebastian Vettel.

Okay, so not that conversation – you know, the one where we ask whether Charles Leclerc is proving to be the superior driver. Leclerc may have taken pole in Bahrain, but he’s still 1-1 in the qualy head-to-head, and Vettel is yet to drive a clean race. We can reserve judgement on that a little while longer, at least.

No, the conversation I’m talking about has a slight, but important difference. Specifically, it’s not a question of pace, but how Vettel perceives the challenge Leclerc is giving him, and whether that poses a threat to intra-team harmony.

The reason this isn’t premature is that, throughout his 12+ year career, Vettel has either established absolute superiority over his teammate, or things in his team have tended to go south. “Healthy competition” just isn’t a phrase in the German’s vocabulary.

Consider that among Vettel’s season-long teammates, two have been willing to play the role of number two (Sebastien Bourdais, Kimi Raikkonen) and largely avoided any problems, one beat him (Daniel Ricciardo) and precipitated his move to Ferrari, and the other, as you probably know (Mark Webber) butted-heads with him at every turn, giving us one of the most contentious teammate relationships in F1 history.

So when Charles Leclerc comes along and takes the fight to Vettel – especially when he’s not supposed to – it makes sense to take notice. It may be only one race, but Bahrain flew directly in the face of what we’d heard and seen two weeks prior in Melbourne, where Ferrari’s decision to hold the faster Leclerc behind Vettel was a clear indication of where the two were in the pecking order.

Given everything we know about Vettel, and assuming Leclerc hasn’t received a reprimand from Mattia Binotto for his actions in Bahrain – and there’s been no indication he has – you would think that would create some serious tension. Being faster and insubordinate, Leclerc was essentially Ricciardo and Webber rolled into one, so why should we expect the end result to be any different?

That said, it’s fair to suggest Leclerc’s own misfortune may have been something of a mitigating circumstance, but sympathy is unlikely to save the Monegasque from Vettel’s wrath if it happens again, and that makes this the first real test of Binotto’s leadership.

The first seed of a civil war has now been sown, and either Binotto will need to make a big show of laying down the law, or, Vettel has to reassert his dominance on track. Anything less, and regardless of whether Leclerc proves consistently faster, the teammate dynamic is likely to shift significantly, and where Vettel is concerned, that’s a dangerous proposition indeed.

Big Question: Can Seb and Charles Continue to Play Nice?