Inside Line: The DTM and Super GT unification dream 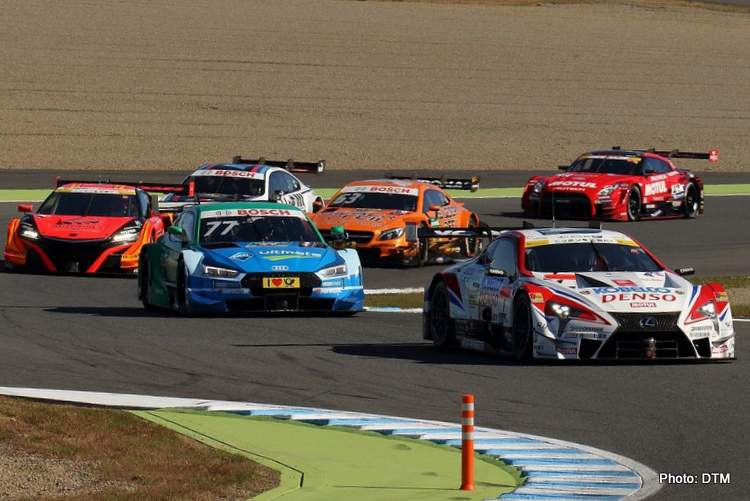 I am very excited of the prospect of DTM and Super GT aligning to create what in my book could be series that can take silhouette-style tintop racing to a level that it deserves after being mercilessly crushed during the Bernie Eccleston era.

Rewind to 1976 when Group 5 – delivering anything north of 800 hp – was an upwardly mobile series catering for ‘Special Production Cars’ which attracted the likes of Porsche with their legendary 935, BMW with their M1 Procar, the iconic Zakspeed Ford, with Toyota, Nissan, Mazda, Lancia and even Ferrari building cars for the series.

Spectacular and popular in the mid-seventies, Ecclestone and his cohorts in the FIA at the time simply destroyed the series in their scorched earth policy regarding anything that proved to be even the slightest threat to F1.

I for one was disappointed because I love tintop racing, and I always believed that F1 can live with a proper sportscar-come-prototype-come-touring-car-series, in which F1 drivers would be attracted to drive as they were in the heyday of Group 5.

Anyone who witnessed those proper bolides, including drivers, were awestruck by them. They were the real deal in terms of tintop race cars and raw power.

But those days are long gone.

Perhaps my love for DTM and Super GT was spawned because the cars have a resemblance to those souped-up Group 5 cars that are forever etched in motorsports folklore.

In terms of technology DTM cars today are tintop versions of F1 cars, with covered wheels and delivering around 640 hp fully loaded.

No surprise that many F1 drivers, when stepping away from the top flight signed up for DTM including the likes of Keke Rosberg, Mika Hakkinen, Ralf Schumacher, Giancarlo Fisichella, David Coulthard and, most recently, Paul di Resta.

On the other hand, the series has also been a stage for emerging talent to attract F1 attention as Esteban Ocon and Pascal Wherlien can attest.

Super GT by nature of its location and hard to find English coverage is less well known to European based race fans, but it a serious championship which most of the major Japanese auto giants take very seriously.

Nissan, Honda and Toyota/Lexus have been a constant in the series for over a decade and that they will now slug it out with BMW, Audi and Aston Martin is a salubrious proposition.

In terms of star power, they have 2009 F1 World Champion Jenson Button in the field.

While the WEC returns to the insignificance of one team wins everything in the LMP1, the unification of Super GT and DTM could trigger a global standard for this type of race car.

The FIA would be wise to embrace and promote this as the premier international tintop sprint series template and perhaps develop an endurance package from the same basic regulations.

This probably won’t happen in the short-term, if eever, but what will happen not long from now is the two non-championship races at Hockenheim in October and at Fuji Raceway in November.

Already this is a big step forward which hopefully leads to bigger things.

The news that DTM will join forces with Super GT for a special non-championship event at Japan’s Fuji Speedway in November is an exciting new chapter for both series.

It’s a unique showcase for the rules – common engine and aero regulations – that bind both series together, and which should offer the opportunity for deeper and more impactful collaborations in the future.

At the moment, November’s Fuji event is a toe-in-the-water exercise: it’s difficult enough to balance performance across one grid of cars, let alone two. But it speaks of a common language and desire to collaborate that unites both series.

In many ways, DTM and Super GT are mirror images of each other. Both boast of fast, loud race cars raced by top drivers and top teams. Both are hugely popular.

Hidden behind a cultural and language barrier, Japan’s domestic motorsport scene is intriguing but elusive for many. So let’s take a closer look at what makes Super GT tick, and just what we can expect when DTM visits in November.

The series began in 1993, originally as the All-Japan Grand Touring Car Championship, but renamed itself as Super GT in 2005. Like DTM, its avowed focus is on close, competitive racing – limiting the spiralling of budgets and disparity of performance through the use of standardised parts.

Unlike DTM, Super GT further narrows the field through the use of balance-of-performance measures; chiefly, ’success ballast’ weight handicapping and fuel-flow air-restrictor limits. These are monitored on a race by race basis to ensure nobody enjoys a significant or long-lasting advantage.

The two series are now unified by the same regulatory framework; ultimately meaning that the cars are now able to race each other.

While DTM and Super GT cars themselves are largely similar, the manner of the racing differs greatly between the two series.

DTM races are hard-charging sprints: drivers can change tyres, but they complete each race without refuelling or a change of driver.

Super GT is like mini-endurance event: races ordinarily last for at least 250km, with each car shared by two drivers. Further adding to the sports car vibe, Super GT also runs two distinct classes. GT500 is the leading category, is supported by Honda, Nissan and Lexus, and comprises around 15 cars.