Tombazis: This year’s F1 rules have an influence on 2021 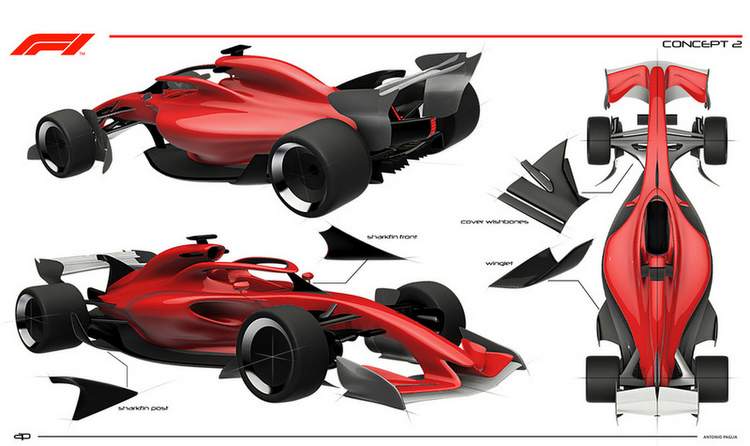 Around this time last year, Nikolas Tombazis was appointed the FIA’s Head of Single Seater Technical Matters, a powerful role with influence in Formula 1, Formula 2 and Formula 3.

In 2004 he went back to England, to work with McLaren, where he started working in a similar position and being promoted to Head of Planning. In March 2006 he returned Ferrari, this time as Chief Designer. He left Ferrari on 16 December 2014.

On 15 January 2016, the Manor Formula 1 team appointed Tombazis as its chief aerodynamicist.

With the 2019 season underway, Tombazis looks at the likely effect of this year’s rule changes and explains why they’re so important for the future of grand prix racing as the sport’s stakeholders map the way forward for the sport from 2021 and beyond.

The FIA introduced a number of key rule changes for F1 this season, especially in the area of aerodynamics. Can you explain what the major differences are and what they were designed to achieve?
Nikolas Tombazis: The major rule changes were aimed at facilitating closer racing. The most important ones involved the front wing and the brake ducts. The changes around these aimed to reduce the ability of teams to control [air] wake from the front wheels, which was being pushed outboard of the car and creating a lot of turbulence behind it. That had a detrimental effect on the aerodynamic stability of a following car, making it very difficult for a rival to get close and make an overtaking move. The rules were designed to bring that outwash a little further in, making it easier for cars to race more closely.We had noticed that year on year it was a worsening trend, and the 2019 rules have been framed to recover some of that. From the indications we’ve had from some teams there has been a step in the right direction. The goal of closer racing was also targeted through changes to the rear wing, which is wider and deeper. In many ways that was a safe bet, as we knew it would increase the effect of the Drag Reduction System and therefore a car will be able to close on the one in front more easily.

Have you received any data detailing the result of the changes?
NT: We were not expecting a huge delta in Australia, which is a difficult track at which to overtake in any case. Some simulations were showing a +10% increase of overtaking, assuming a similar evolution of a race, of course. In other races the same simulations expect a more sizeable increase, possibly to the tune of +50%.To be clear, that is from simulations of cars following each other in races from last year, using this set of rules. That’s the feedback we’ve had so far, but it will really only become clear as we progress through the season. We weren’t expecting miracles in round one at Australia, but generally we are expecting a step in the right direction as far as aerodynamics are concerned.

There was some suggestion that as a result of these regulation changes that lap times would increase. NT: Have the rules been successful in avoiding that or was it even a concern?
We were not really concerned about whether the car would become slower or faster. That was not the objective. The goal was to facilitate closer racing, which makes the racing better. I really do not believe that the lap times we envisaged are significant. If we were 20 seconds slower that’s another story, but one or two seconds at the level we are at is inconsequential if it results in closer racing. Through their development of the cars, teams have clawed back time and will continue to do so across the season. I don’t think outright performance is part of this debate; I think it’s part of the distraction.

So the rules won’t impact on the excitement of this season?
NT: I would say that how exciting a race depends on a number of parameters and not just aerodynamics. It depends on tyre management during the race, and we have revised tyres this year. It depends, too, on performance differentials. For example, if you happen to have a car that is one second a lap faster than the following car, then no matter how much the rules have been designed to promote close racing. The fast car will pull away and the race will not be that exciting. It’s both a function of the ability to follow each other closely and of the delta performance. And again we don’t know yet where that is. We have seen some design trends in Barcelona and I’m sure teams will try out each other’s solutions in their wind tunnels and in CFD, so I’m hoping that if there is initially a performance delta between the cars that due to certain parts of the car being a bit simpler convergence among teams will be relatively quick.

Did you get any pre-season data on wake turbulence and how it has changed?
NT: Anecdotally, some drivers mentioned that following another car was easier. It’s obviously nice to hear that feedback, but I think it’s easy to get confused if you’re following a much slower car or a car on a very different test programme. I don’t think you can really judge. And to be honest, teams are far too busy in pre-season testing to spend time doing any serious work on this topic. All teams say the increased DRS effect is a strong positive. But as I said, that was fairly easy to achieve. Some teams say the front wake is going in the right direction but that it’s not a huge step, while others are saying it does represent a bigger change. It’s not fully clear yet.

Having seen how teams have interpreted this year’s aerodynamic changes are you satisfied overall with what’s been achieved?
NT: Looking at the cars in testing and seeing certain solutions there are undoubtedly a few things we might have done slightly differently in the rules, but that’s always the case. Overall, I’m pleased with the direction of the aerodynamic characteristics. I certainly don’t think we have arrived at the final destination point and we can never sit back and say, ‘OK, it’s all fine’. However, I think that if we hadn’t gone through this process and we were sitting here writing the 2021 rules we would be in a much weaker position. For what we are trying to achieve, 2019 has been a very useful exercise and has lessened the wake effect. Whether this season proves to be an exciting championship depends on how closely matched the teams are. And like everyone else, that’s something I’m very anxious to see.

When are you expecting to have a version of those 2021 rules finalised?
NT: The FIA’s International Sporting Code determines that certain things need to be finalised by the end of June, and that’s what we’re working towards.

Looking at the other 2019 rules, there have been a couple of safety modifications, haven’t there?
NT: The rear wings have moved up a bit for visibility in the mirrors. This was done because we found that part of the issue of drivers not being able to see properly was to do with where the rear wings lie in relation to the sidepods and where the mirrors were positioned. It offered only a very thin field of view and, depending on where the head is and where the mirrors are, they would just not see properly. We moved the rear wing up by 50mm to correct that and we have also been a bit more specific about mirror positioning. We added two rear lights on either rear wing endplate. That is in addition to the existing central rear light. That’s obviously for increased visibility in poor weather conditions.

Drivers will also have an extra fuel allowance this year. What was that designed to achieve?
NT: There is a 5kg increase in fuel to 110kg in order to enable drivers to do less fuel saving and push a bit more during races. It will not have an effect at every race, but there were some races that were too close to the limit and the change should make life a bit easier. I would say it is not a panacea, though, as there are other reasons why drivers save fuel, such as a team choosing to be fuelled light at the start of the race. The rules cannot cover that choice but where possible it will allow drivers to push harder in the closing stages of a race. With regard to that wish to have drivers pushing in the closing stages of a race, there has obviously been a significant change in recent weeks with an alteration to the sporting regulations that offers championship points for the fastest race lap. That has been done to bring more excitement and encourage drivers to push in the final stages of a race when their cars are at their lightest.