Fiorio: Vettel versus Leclerc will be a big problem for Ferrari 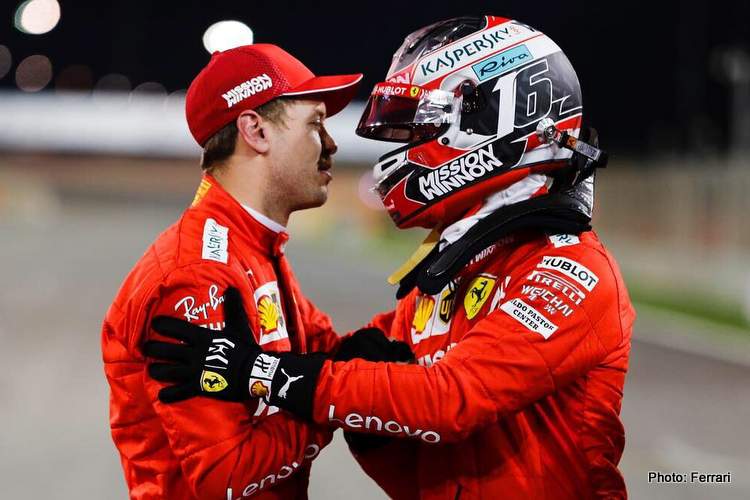 While the Formula 1 world is tantalised by the arrival of Charles Leclerc at Ferrari, the team’s former chief Cesare Fiorio is not so sure that a driver battle for supremacy is what the most famous team needs as they hunt reliability for their otherwise impressive package.

At the end of last season, Ferrari decided to promote young Charles Leclerc to the main team for this season, the 21-year-old stepping up to challenge 31-year-old Sebastian Vettel, a case of youth versus experience.

After a dramatic Bahrain Grand Prix the young charge has seized the upper hand in emphatic style on a night he deserved a first F1 victory but was robbed by a technical issue and had to settle for third instead.

Nevertheless, the die was cast when Leclerc defied team instructions during the race and clinically got by his teammate after being told to wait, the message he sent the red pitwall was loud and clear.

In an interview with Tutti Motori Web, after the Bahrain weekend, Fiorio said of Leclerc’s performance, “Frankly, I expected it. Last year I followed Leclerc very carefully with Alfa Romeo and saw that, after the first four or five races in which he learned his trade, he started to dominate the team, to humiliate his teammate and deliver great results for that car.”

“Therefore, when he arrived at Ferrari, I immediately thought it would be a big problem for Vettel, who is a driver who mistakes when he is put under pressure.”

Ferrari’s new team principal Mattia Binotto insisted ahead of the season that the two drivers would be given equal treatment and would be free to race. But at the season opener, Leclerc was told to hold station late in the race when he was clearly quicker than his teammate.

Two weeks later, again he reeled in the #5 car but this time he defied the call to hold station for a couple of laps and attacked when the first opportunity arose less than a lap later.

Fiorio continued, “I have great esteem for Binotto, who has been at Ferrari for decades and is an engineer of the highest order. He knows how to make strong race cars and can take care of their flaws. From this point of view, he will be very good for the team.”

“However, he probably didn’t expect Leclerc to be immediately competitive, as I expected he would be. This will pose a big problem for him because on the one hand, he will have to push Leclerc and on the other hand, the team needs to counter a very competitive Mercedes. I don’t know how they will react.”

“If I had to decide, I would not appoint a number one or number two driver, I would leave them free to do their races, hoping for circumstances to sort it out. Then later there is always time to make provisions as the race develops.

Fiorio managed potentially explosive teammates, Alain Prost and Nigel Mansell during his tenure at the helm of Maranello and agrees that there are similarities, “Yes, a little…”

“But at the time, even though Prost and Mansell were very competitive with each other, there were never any problems. Now it is necessary not to put Vettel in a position to make mistakes by removing the pressure off him, even if it is not easy, in such a tight fight.”

“If Leclerc is faster let him overtake and if Vettel can he will defend his position. This is fine as long as this makes the team more competitive against Mercedes. For the long term, we must focus on Leclerc who has all the technical skills, great spirit and racing talents,” reasoned Fiorio.