Mercedes flip the switch to light up their Formula E era 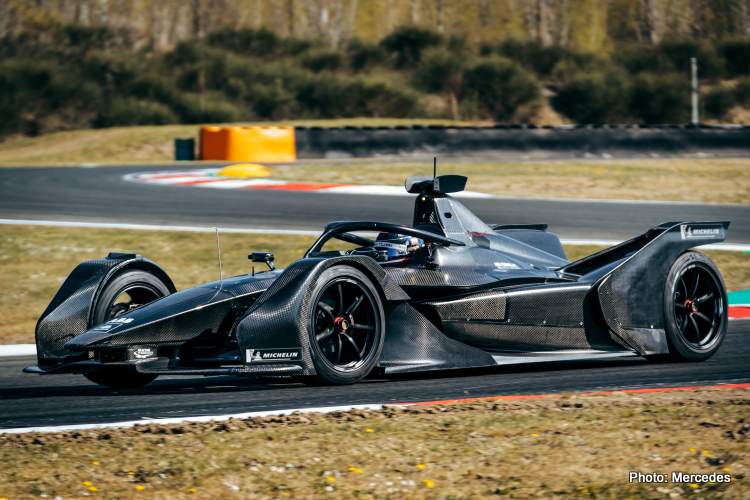 Mercedes flipped the switch to kick start their Formula E era as their car took to the track for the first time in Italy, as the German auto manufacturer prepares for their first season in the electric series at the end of the year.

DTM was ditched by the company to take part on what they believe is a more relevant series, and will run the Formula 1 tea, in tandem with the Formula E operation for a double-pronged onslaught – headed by motorsport chief Toto Wolff – on what is the premier series and the pretender to the throne. Hence the Silver Arrows have hedged their bets.

This is what they had to say in the wake of the test at Varano:

One more milestone for the Mercedes-Benz EQ Formula E Team: First outing for the new car at Varano, Italy

The race debut of the Mercedes-Benz EQ Formula E Team is getting nearer by the day. Last week, the team passed yet another marker on the way to its first race in season six of the ABB FIA Formula E Championship.

At Varano in Italy, Stoffel Vandoorne and Venturi driver Edoardo Mortara took the new Mercedes-Benz EQ Silver Arrow 01 out for its first sequence of runs last Wednesday, Thursday and Friday.

Edoardo Mortara was a member of the Mercedes-AMG Motorsport DTM squad in 2017 and 2018, and he still has links with the team. During the test drives at Varano, the Venturi driver stepped in for Gary Paffett who was in action at the Intercontinental GT Challenge at Laguna Seca.

The first day was set aside for the shakedown of the new car, the regulations for which permit the team to complete a maximum of 50 kilometres to check out the systems. During the course of the three days, the new vehicle covered a total distance of 527 kilometres. The objective was to compile as much information and data as possible about the first version of the power unit and the rest of the drive assembly.

“When a new racing car comes to life for the first time and goes out onto the track, that’s always a very special moment,” said Head of Mercedes-Benz Motorsport Toto Wolff. “Not only have we reached an important milestone for our as yet young team, but we have also laid a solid foundation for further development. But there is still a lot of work to do before our race debut when the next season starts towards the end of this year.”

“We are very pleased with the progress made during our first test with the new car,” said Ian James, Managing Director of Mercedes-Benz Formula E Ltd. “The first days of testing at Varano were a very important step in the development of our team. We brought together experts from our different sites at Affalterbach, Brackley, Brixworth and Stuttgart, and at the end of a successful three days, they left as members of a team – it was the birth of the Mercedes-Benz EQ Formula E Team. In the coming weeks and months, many more milestones will follow on the way to our first race.”