Inside Line: Shout out to Zak Brown and McLaren 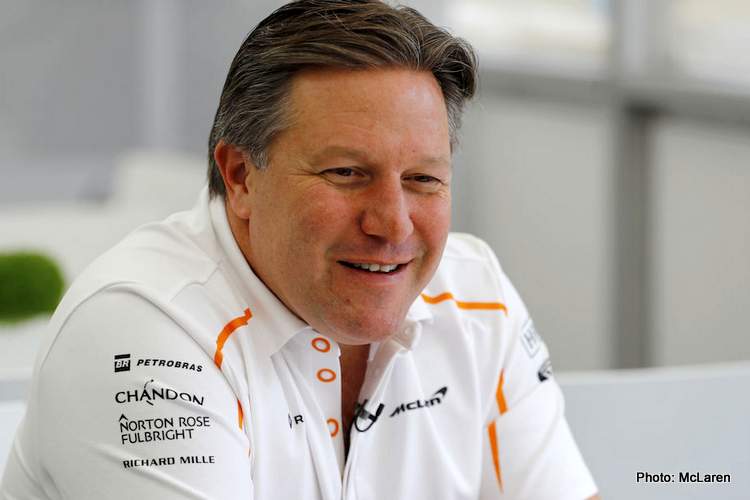 In our kitchen there is a largish bowl with fresh fruit – bananas, mandarins, oranges, kiwis and apples – which we keep stocked for whenever a family member needs a snack.

The other day there was shiny apple at the bottom of the bowl, so I reached for it and when I grabbed it, my fingers pushed through the fragile skin and sunk into the mush – it was rotten to the core. [True story happened on Monday!]

I guess that’s what Zak Brown found when he took the job to lead McLaren. There was this legendary team headquartered at the shiny sci-fi MTC but what he found was a ‘mushy’ organisation – a shadow of the potent force they once were.

Whether you are a fan or not, the fate of the Woking outfit over the past several years hurts because the top flight needs this team to be strong again. As the second most successful team in the sport’s history it is far more than a racing team – its an F1 institution.

Thus the person ordained to lead McLaren is inevitably thrust into the heat of the laser-like media spotlight and subject to the whims of modern-day keyboard warriors, who have had a field day for far too long at the expense of the team.

Brown has not been spared. Indeed, I have often questioned his suitability for the role and even doubted that he is the man to lead at Woking. But, hat in hand, there is a time to acknowledge when one might be wrong.

Expectations were low ahead of this season after a woeful 2018, which kick-started the new, post-Honda, Renault customer era but did not deliver on naive preseason expectations.

Granted, during the course of last year Brown swooped on and bagged James Key, but the former Toro Rosso technical chief was only able to join the team in Bahrain, so his effect on the current project is probably nil.

Thus with what he had after a gruesome campaign, Brown ignored the doubters, galvanised his troops and by putting Pat Fry in charge of the technical department the team have produced a very handy piece of kit in the MCL34.

The improvements have been massive according to Alonso who tested this year’s car in Bahrain on Tuesday, after which he declared, “The car is a step forward in every aspect from last year.”

“It has more grip, it’s less draggy on the straights, the engine is a step better, so overall as a package the car is going in the right direction and we’re closer to the front.”

Thus, rookie Lando Norris and newcomer Carlos Sainz have a decent race car at their disposal.

Good enough for their younger driver to qualify eighth in Melbourne and then claim a fine sixth place in Bahrain on Sunday.

The kid is good and Brown took the gamble to thrust the teenager into the spotlight of the top flight. A well-considered risk, but a risk nevertheless, which appears to be paying off. More kudos for the boss.

On the other side of the garage, Sainz’s first two races with the team have been disappointing, most of all, for the driver.

In Melbourne, during the race, after a below-par quali he was feisty in the race, as he made up positions in a car that was clearly capable of scything its way up to the sharp end of the midfield until the power unit went up in a puff.

Two weeks later in Bahrain, Sainz qualified seventh but a hectic first lap resulted in damage to the car which compromised his race. He finished last of the runners, four laps behind the leader.

Notably, the Spaniard’s problems were not because of a car that lacks performance, as was the case with Alonso and hapless Stoffel Vandoorne throughout last season.

Consider this: during last year’s Bahrain qualifying Alonso was 2.256 seconds slower than the pole position time, eigth months later in Abu Dhabi their veteran Spaniard was three seconds shy of pole and 1.1 seconds down on the best Renault powered car. It had been a serious downward spiral.

Fast forward to last Saturday’s Bahrain qualifying session where Sainz’s best effort was 0.947 of a second down on the top time and half a second faster than the best Renault.

Whatever way you look at it, there has been big progress.

Granted barring force majeure or a miracle they won’t be winning F1 races anytime soon which, of course, is what they are targeting but a podium (when the stars align) would not be hard to imagine in their current state.

Furthermore, and also cause for optimism, what we have now is not McLaren fully loaded because stepping into the ring are the heavy-hitters they have signed, namely highly-rated Key and newly appointed managing director, former Porsche WEC chief, Andreas Seidl.

Both were in Bahrain but can hardly claim credit for this year’s car, to this point. For that Fry should take a bow because the MCL34 a useful platform to progress from, but it will be next year’s MCL35 which will reveal how potent McLaren will be in the future with their new players.

Whether this is the first year of Brown’s five year plan, or the third, is not quite clear to me but, whatever the case, something has sparked internally and the positive results can be seen on the track.

For that, the American marketing and media guru turned team chief, and everyone at McLaren should be applauded for the breakthrough and encouraged to keep up the good work.

When times are tough bosses tend to cop the cruel criticism, and Brown was spared little last year but with where they are right now he deserves to be singled out and given due credit, maybe his way is the right way after all…

Big Question: Can McLaren be Best of the Rest this season?