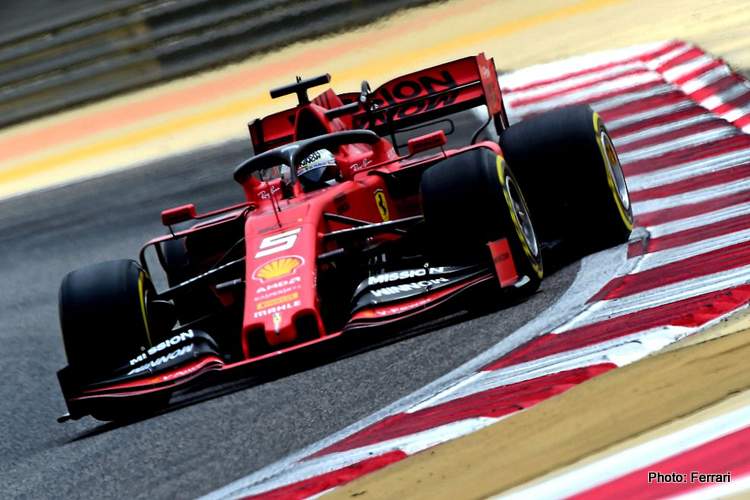 Sebastian Vettel wrapped up the two days of the third Formula 1 test of the year at the Bahrain International Circuit.

The Scuderia Ferrari Mission Winnow driver was back at the wheel two days on from Sunday’s race and completed a total of 103 laps, 47 in the morning and 56 after lunch. Over the course of the test, the SF90 therefore completed 159 laps, starting with Mick Schumacher’s 56 on Tuesday, equivalent to 860 kilometres.

The weather was a definite improvement on yesterday and that helped Sebastian get through the planned programme with the team working on set-up and car balance. Before the lunch break, the German did several short runs under 10 laps, to assess the handling of the car in different configurations.

In the afternoon, Sebastian did some race simulation work, so as to analyse in depth the behaviour of the tyres. His fastest lap was a 1:29.319, set in the morning, good enough for third position on the time sheet.

Now, Scuderia Ferrari Mission Winnow sets its sights on China, which hosts the third Grand Prix of the season next week. This race will also be the one thousandth in the history of Formula 1, the first dating back to the race at Silverstone on 13 May 1950. Ferrari has taken part in more of those races than any other team.

Sebastian Vettel: “Today we made the most of the time available thanks to good and consistent track conditions. We were able to try various set-up configurations and evaluate the behaviour of the tyres. I’d say it was a pretty positive day.”

“In the morning, we concentrated on some short runs, while in the afternoon, we simulated various phases of a race. It was an interesting session because we managed to gather even more information which could be useful in the upcoming Chinese Grand Prix.”