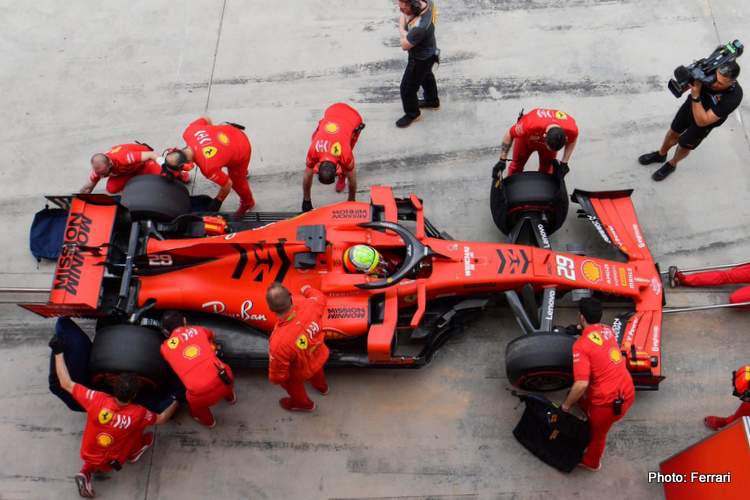 Mick Schumacher, son of seven times world champion Michael, made his Formula 1 test debut with Ferrari on Tuesday at the Bahrain circuit, where 15 years ago his father won the first grand prix in the Middle East.

Before the rain came down to interrupt proceedings, Schumacher had completed 34 laps and was eighth on the timing screens with a best lap time of 1:32.552. Romain Grosjean, in the Ferrari-powered Haas topped the times when the session was stopped.

The 20-year-old European F3 champion made his Formula Two debut at the Sakhir circuit over the weekend, finishing eighth and sixth in the two races.

The German, whose father won the Bahrain Grand Prix from pole position in a Ferrari one-two on April 4, 2004, will also test with the Ferrari-powered Alfa Romeo team (formerly Sauber)on Wednesday.

Tuesday’s test in the SF90 was Mick’s first experience of a modern F1 car, although he did drive his father’s 1994 title-winning Benetton at the Spa-Francorchamps circuit before the 2017 Belgian Grand Prix.

“Obviously, with the name and being the son of Michael, there’s certainly some links and expectations,” four times champion and current Ferrari driver Sebastian Vettel said last week.

“The way he has developed in the last years, he deserves where he is now. Now we should give him the time and the peace to do his job.”

Michael Schumacher, who still holds the record of 91 grand prix wins, won five of his titles with Ferrari in a golden period from 2000 to 2004. He left the team in 2006 before a comeback with Mercedes from 2010-12.

Schumacher senior has not been seen in public since he suffered severe head injuries in a skiing accident in the French Alps in December 2013. He turned 50 in January.

Mick, who joined the Ferrari academy in January, was the only debutant on track opening session that followed Sunday’s second grand prix of the season.

They were joined by double world champion Fernando Alonso, who left Formula One at the end of last season but was back in a McLaren testing tyres for Pirelli.