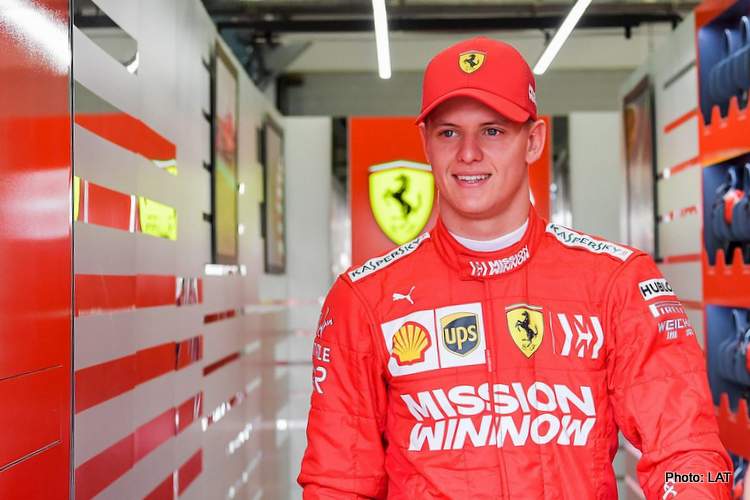 The son of Formula 1 legend Michael Schumacher, Mick Schumacher completes a fantasy-like script when he lowers himself into the cockpit of a Ferrari Formula 1 car and thrusts the sport Back to the Future.

The state of seven-times F1 World Champion is well documented and of course, he won’t be present for the historic moment but that only serves to add poignancy to a remarkable, albeit sad, tale of the Champion’s son arriving on the scene to continue the astonishing legacy.

No doubt his father’s spirit will weigh heavily over today’s proceedings, but the day belongs to 20-year-old Mick who steps into the Ferrari SF90 because of his racing achievements to date and not because he is the son of the sport’s greatest driver.

A decade ago ‘Mick Betsch’ or ‘Mick Junior’ embarked on his karting career with the goal being Formula 1, joining countless kids in the karting championships around the globe, dreaming the same dream.

Obviously well funded, Mick’s career was solid if not stellar, but he did end runner-up in the German and Italian Formula 4 Championship in 2016.

The big ‘growth spurt’ happened last year when he capitalised on a surge of form to win the European Formula 3 Championship and with it capturing the attention of the motorsport world.

Inevitably he was chosen for the Ferrari Driver Academy (FDA) earlier this year and was confirmed as a Prema driver for the F2 Championship.

On Saturday, Schumacher made an impressive F2 debut at Sakhir, when he qualified tenth and did well to finish eighth with a last lap move earning him pole position for the Race 2.

A day later, much like his Ferrari colleague Charles Leclerc did a few hours later in the Grand Prix, Schumacher fluffed his first F2 top spot start and was soon gobbled up by a very experienced and talented F2 field.

The Prema driver kept his head and did well to finish sixth but was not entirely happy with his debut, “I would be lying if I said I am completely satisfied with how the race went today but there was not much I could do.”

“Unfortunately, the lockup in Qualifying compromised the strategy for this race. All in all, it was a weekend which taught us a lot, and I am confident that we will translate that to the track.”

Meanwhile, prior to the Bahrain race weekend, it was announced that Schumacher would make his official F1 debut with Ferrari today, with a second day for him in the Ferrari-powered Alfa Romeo tomorrow, making it abundantly Maranello are grooming him for the top flight.

Intent on focusing on his F2 programme in Bahrain, the youngster was tight-lipped about the prospects of emulating his father.

However he did reveal to reporters, “It’s something that came pretty suddenly and pretty quickly.”

“I’m totally confident and ready. It’s always been part of me. I guess I always had the time and the chance to grow into that. I had a lot of people behind me that helped me on the path.”

“The [F1] cars look beautiful. I guess to be a Formula 1 driver is something very special because obviously there are only 20. I guess if you are amongst them, it means you have reached a very good level, and is a goal that a lot of people dream of.”

Fast enough his arrival in F1 cannot come as a new youthful generation arrives on the scene, headed by prodigy Max Verstappen and followed by the likes of Leclerc, Pierre Gasly, Alex Albon, Lance Stroll, Lando Norris – Schumi III would be the cherry on the cake for the forthcoming era of our sport, which will be well served with this new cast of superstars.

As we witness the resumption of the Schumacher legacy in F1 it is worth contemplating that the name has garnered 97 Grand Prix victories – Ralf and Michael combined – plus seven F1 world titles courtesy Schumi I.

The third ‘coming’ with Mick, promises even more and if I were a betting man I would wager a grand on Schumi III scoring his family’s 100th Grand Prix victory in the not too distant future.

It does not take a sage to predict that Mick will be a Ferrari F1 driver in the future, perhaps even as early as next year if Sebastian Vettel – who counts Michael as his mentor – quits the Scuderia at the end of this season (yes, you heard it here first) Schumacher is a potential replacement and partner for Leclerc.

As I said, you could never script this stuff!