Haas: We want to understand why we lacked race pace 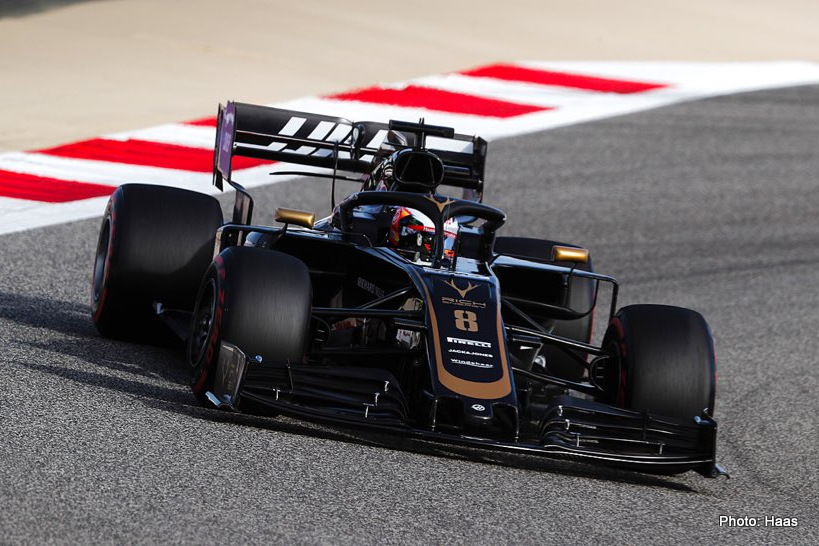 Romain Grosjean and Pietro Fittipaldi both logged time at the wheel of the VF-19 Tuesday at the rain-affected Formula One test at Bahrain International Circuit.

Grosjean had 42 laps banked in the morning before a flurry of rain showers halted proceedings at the 5.412-kilometer (3.363-mile), 15-turn desert-based circuit.

The 32-year-old French driver set his fastest time, a 1:30.982, on the Pirelli P Zero C3 yellow tire, subsequently topping the timesheets prior to the near five-hour rain delay.

Grosjean’s time stood until late in the day, eventually placing fourth fastest among the 15 drivers participating on the first day of the test.

Fittipaldi strapped in for the final 75 minutes of the session. The Rich Energy Haas F1 Team test driver took to the still-drying track and worked through a shortened test plan running used C3’s leading to the checkered flag at 6 p.m. local time. With 20 laps recorded, the 22-year-old Brazilian set a best time of 1:32.708.

Fittipaldi will drive the VF-19 Wednesday morning with Grosjean returning in the afternoon to conclude the second and final day of in-season Formula One testing in Bahrain.

Romain Grosjean: “Surprising conditions today, we weren’t expecting to see rain in Bahrain. We did what we wanted to in the morning, which is good. We had a program for the afternoon which we couldn’t get to due to the weather conditions.”

“Hopefully we can do that tomorrow. Clearly we want to understand why we were lacking pace in the race on Sunday, and to achieve that we need some dry weather. We’ve got some good ideas, some good test items, so that’s the plan for tomorrow.”

Pietro Fittipaldi: “It was good to get out there. Conditions were a bit damp, but it allowed us to get some running in as the track was drying. That was good for me to get ready for tomorrow. We stayed on used tires this afternoon, I was able to do some longer runs and get more comfortable with the car. I felt good, so I’m looking forward to driving again on Wednesday.”