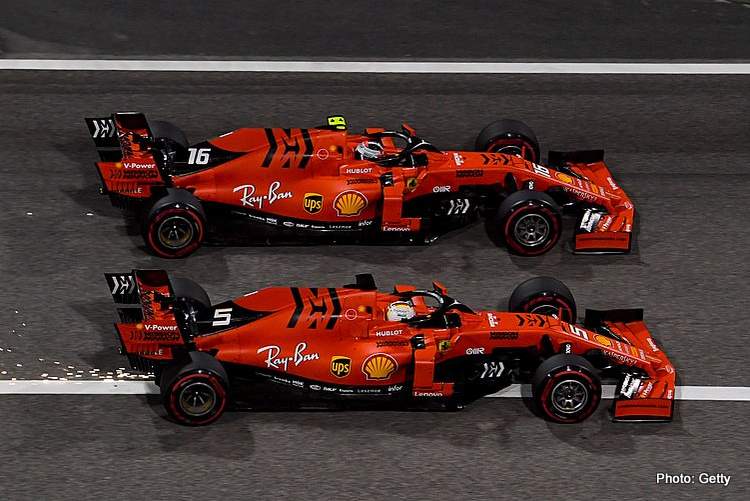 One day when we look back on Formula 1 history, Sunday at the Bahrain Grand Prix will be remembered as the day the balance of power shifted at Ferrari when Sebastian Vettel was challenged and well beaten by his young upstart teammate Charles Leclerc.

On Saturday, the 21-year-old from Monaco signalled his intent with a mega-lap to claim pole position during qualifying at Sakhir, thumping his teammate by three-tenths of a second and lead a Ferrari front row lock-out.

On Sunday, Leclerc botched his first start from top spot on the grid, suffering from lack of grip he was ragged for the first few laps until the sweetspot kicked in and he became untouchable. First he dispatched second place Valtteri Bottas and by lap five the #16 car loomed large in Vettel’s mirrors.

But clearly patience is not one Leclerc’s virtues because less than a lap later, the moment he sniffed a gap into Turn 1, he made his move and, with little fuss, took the lead where he remained until lap 47 when the SF90 lost its ERS.

In the end, third was his reward for a race that had his name on it until fate decided to be cruel.

Asked why he defied the team instructions after the radio chat, Leclerc explained, “I was just letting them know. Then I think I had an answer, saying to me ‘OK, stay like this for two laps’ but then on the next straight I had the opportunity to go for it, so I went for it and it was a successful pass and then I was just quicker, so then I did my race.”

Thus Leclerc humbled Vettel in only their second race as teammates, and while the youngster will only get better the big question is how the German will cope with this new pressure, after all he did spin by himself when tussling with Lewis Hamilton for second-place.

For whatever reason, like in qualifying, Leclerc had the measure of his more experienced teammate throughout the race and his clinical demolition of Vettel is the surest signal to the team that he is not there to play second fiddle.

Robbed of a certain win, the anguish of defeat was clear to see in Leclerc’s post-race demeanour. Losing this one in the manner that he did hurt, “To lose the lead in this way it’s always a shame and always a disappointment but I also had a lot of things to do and there were still points to grab so I very quickly got back to focus on my race.”

“Obviously the win was out of reach because of the problem but there were still very important points to gain. I just tried to focus as much as possible.”

It is no surprise that the youngster has risen to the challenge in such a feisty manner. He has always been a dominant competitor in whatever series he has raced in. He won in his debut in every category he contested except last year, with Sauber in F1, where there was no way he could continue the tradition.

However, records show that he was dominant in karting from the outset, going on to win in his Formula 3 debut in 2015 and a year later was GP3 champion at first attempt. Then, in Formula 2 he dominated in his debut season setting the record for wins and poles.

With a competitive car in F1 he is now showing what he can do in the top flight, and so far what he has in his armoury, mentally and in terms of skill, is very impressive.

Asked if the disappointment on Sunday night was the worst of his career, Leclerc pointed to losing the lead during his home F2 race in 2017 as the most painful, when a wheel issue forced him to DNF, as another heartbreaker.

And added, “I will not go to that extreme because I think F2 in Monaco was probably the worst I’ve ever had but yeah, because it’s still a podium and it’s my first podium in F1 so in a way I feel I should enjoy it.”

“The way I felt like there was a lot more to take this weekend but yeah, overall, of course, it’s not the ideal race we wanted but we shall be happy about our third place despite problems.”

Sunday night we saw the emergence of the new pretender to the Maranello throne, the impatient Prince who wants to be King and who surely won’t be denied for too long.

Big Question: Will Ferrari be justified in reeling Charles so he does not challenge Seb?