Williams: We worked well to get both cars home 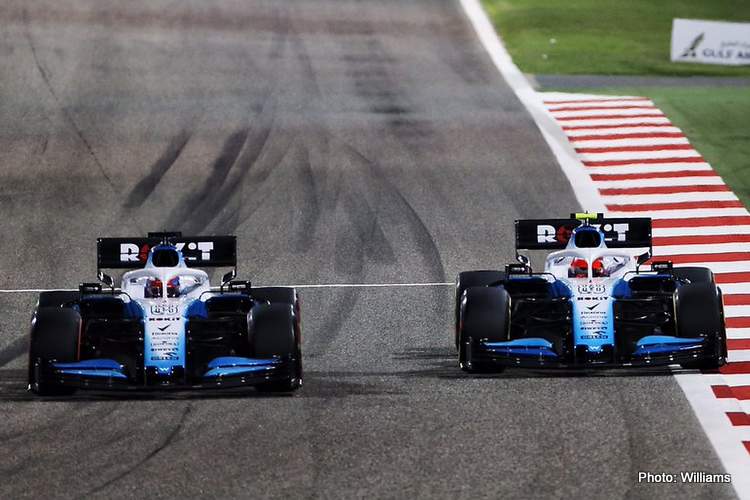 Williams continued to be anchored to the back of the field with a woefully uncompetitive car this year, but credit to their drivers George Russell  and Robert Kubica for making the most of what they had and slug it out with one another albeit way off the pace.

On a night of attrition, the pair crossed the line at Sakhir in 15th and 16th, last of the cars still running at the end. Russell’s best race lap was nearly four seconds sdrift of the fastest lap set by Ferrari’s Charles Leclerc.

Dave Robson, Senior Race Engineer: “It has been another tough evening in Bahrain. The wind has been incredibly strong and very gusty which made driving the cars very difficult, and this was true for all drivers. We ran largely the strategy that we intended, and both cars were able to fight each other quite a lot, particularly in the first stint using DRS to attack and defend from each other. Credit to Robert and George as they drove extremely well and fought each other cleanly. Once the order settled down we continued to follow our strategy, we worked well to get both cars home, and we benefited from a few retirements at the end of the race.”

George Russell: “We know where we are at the moment, but it was a fun race for me. I had some nice little battles with Robert so I’m thankful to the team for letting us race as it was enjoyable. It was quite a good race from a personal perspective but obviously not too enjoyable finishing in P15. We know where we are fighting for, but we brought the car home and learned some more things.”

Robert Kubica: “It was a very tough race, but we expected that. The car balance issues that I am having put me in a difficult position today. Additionally, the wind didn’t help so it made it more complicated, but I had a few enjoyable laps when the tyres were fresh. However, I knew what was coming so I had to take care of the rubber and ensure that I kept the FW42 on track rather than concentrating on performance.”