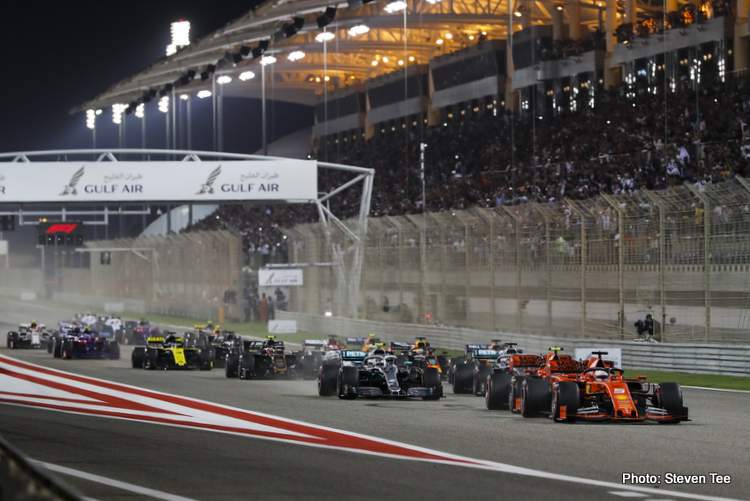 The Bahrain Grand Prix report and observations from the desk Formula 1 Media Chief Luca Colajanni regarding crowd size and an epic action-packed race.

Lewis Hamilton has won the 2019 Bahrain Grand Prix, the 999th FIA Formula 1 World Championship race. Victory for the five-times world champion came at the end of an exciting race in which Charles Leclerc played a major role.

The race was very exciting, with plenty of overtaking and drama from the 20 drivers. It was enjoyed by a crowd of 34,000 spectators who came to the Bahrain International Circuit today. That is the biggest race day crowd in this event’s 15-year history, as is the overall figure for the weekend of 97,000.

The Mercedes AMG Petronas Motorsport driver secured the win thanks to his team’s superior reliability, given that Leclerc and his Ferrari were the quickest combinations today. Starting from pole, the Monegasque driver was beaten off the line by his team-mate Sebastian Vettel and also passed by Valtteri Bottas’ Mercedes on the opening lap. But Leclerc took back the lead in imperious fashion over the course of the next six laps, before gradually distancing his rivals.

Once he had made his second pit stop without losing the lead, Leclerc appeared to be totally in control of the situation, as he had a comfortable 8.5 second lead over Hamilton on lap 45, the Englishman having relieved Vettel of second place in a spirited duel.

However, Leclerc’s power unit suffered a serious drop in power as from lap 46, which saw him slow more and more, so that Hamilton cruised by on lap 48 as did Bottas on lap 54. Only the Safety Car, neutralising the race because both Renaults were stranded in a dangerous place on track, saved the Monegasque driver from the fast charging Verstappen. It meant he at least made it to the podium for the first time in his so far brief F1 career. It was richly deserved, but bitter sweet.

The outcome for Scuderia Ferrari Mission Winnow fell well short of expectations. Sebastian Vettel was fifth, as a result of a spin on lap 38, just after being passed by Hamilton, which led to his front wing coming off, requiring an unscheduled pit stop to fit a new one. The only slight consolation for the team was the additional point that Leclerc brought home for setting the race fastest lap.

By contrast, Mercedes did amazingly well to score its first-ever one-two finish in this Grand Prix, given that, after qualifying, they seemed to be a long way off the pace. It confirmed the reigning champions’ ability to make the most of any weakness on the part of others.

Thanks to the point he got for setting the race fastest lap in Melbourne, Bottas keeps the lead of the championship, while in the Constructors’ classification, Mercedes already has a significant 39 point lead.

The German marque played another role in the final stages of the race, as it provides the Safety Car which for the eighth time ever, the last dating back to China 2015, led the cars across the line to take the chequered flag, because of the previously mentioned simultaneous retirement of the two Renaults of Nico Hulkenberg and Daniel Ricciardo.

The French marque literally saw its hopes of a double-points finish go up in smoke. However, it could take some consolation from the fact that it supplied the power unit that allowed Lando Norris to take a great sixth place for McLaren.

Honda could be pleased with its day’s work, because although it failed it match its Melbourne performance of getting a driver on the podium, three of its four cars finished in the points: a fourth place for Max Verstappen, an eighth for Pierre Gasly in the Red Bulls and a ninth place for another rookie, Alexander Albon in the Toro Rosso, which means a Thai driver has scored points for the first time in 65 years, when, back in 1954, Prince Bira finished fourth in the 1954 French Grand Prix.

Luca Ghiotto was untouchable in this afternoon’s FIA Formula 2 Championship Race 2, blasting into an early lead before making a brave pitstop call, slicing back through the pack and soaring to victory ahead of DAMS pair Sergio Sette Câmara and Nicholas Latifi.

The win handed Ghiotto the lead in the drivers’ title fight at the end of Round 1, with the Italian on 37 points leading Latifi by 2 points followed by Sette Câmara on 27, Delétraz on 16, de Vries and Anthoine Hubert on 12 and Zhou on 11; while in the teams’ championship DAMS have built an early lead with 62 points over UNI-Virtuosi Racing on 48, Carlin on 18 ahead of ART Grand Prix and BWT Arden on 12 points each as all eyes turn to round 2 of the championship in Baku, Azerbaijan. 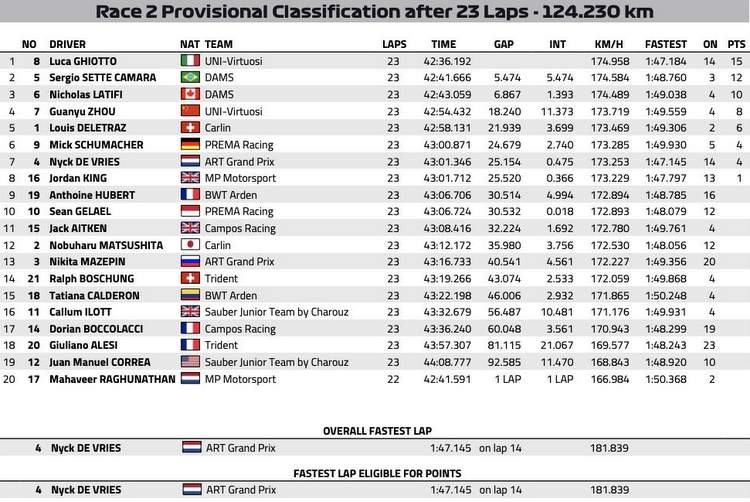 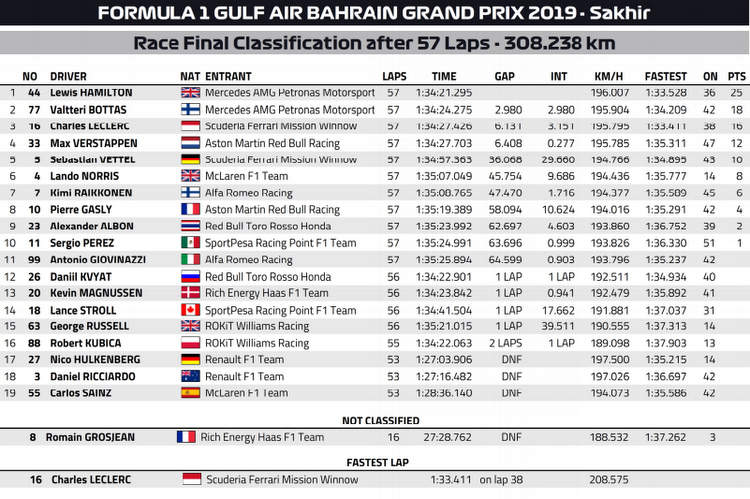