Ferrari: Reliability problem is something unacceptable 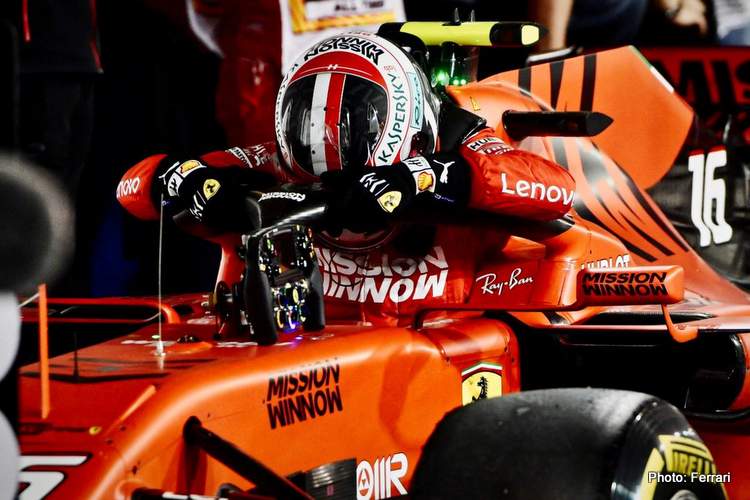 Scuderia Ferrari leaves Bahrain with a feeling of regret after the second round of the Formula 1 World Championship, thinking about what might have been.

All weekend long, the SF90 clearly demonstrated it had the potential to win, having rediscovered the competitive pace it had lost in Australia. However, in the end, it had to settle for a third place courtesy of Charles Leclerc and a fifth with Sebastian Vettel.

Sebastian got the better of his team-mate at the start to lead at the first corner. Charles found himself in third behind Valtteri Bottas in the Mercedes, but on the second lap, the Monegasque driver got past the Finn and closed on his team-mate. Charles had a better pace and passed Sebastian on lap 5 to take the lead.

On lap 13, Charles came in for his first pit stop, switching from the Soft to the Medium tyres, as did Sebastian on the following lap, the German rejoining behind Hamilton in the Mercedes who had stopped one lap earlier. The German took eight laps to attack and overtake his rival at Turn 4.

On lap 35, Sebastian made his second stop, once again duelling with the Englishman. The German ended up spinning and flatspotted his tyres which resulted in the front wing coming off due to the strong vibrations. He then had to pit again for a new one. Charles also came in again, on lap 36, but kept the lead setting the fastest lap with 1’33″411.

With 15 laps remaining, Charles’ car suffered a power unit problem which meant his pace slowed dramatically, The two Mercedes thus managed to pass him, but with two laps to go, the Safety Car came out to deal with two cars stopping on track at the same time, which froze the positions, so that Leclerc was at least able to enjoy the satisfaction of his first ever F1 podium finish.

He thus equals Louis Chiron, the only other driver from Monaco to have made it to a Formula 1 podium, which he did in his home race in 1950, the race in which Scuderia Ferrari first took part in the World Championship.

Formula 1 is back in action in two weeks time with the Chinese Grand Prix, which will also be the one thousandth Grand Prix in the sport’s history.

Charles Leclerc: “It’s part of motorsport, we know that. Sometimes it’s not your day to win and today wasn’t ours. In the final part of the race we had an issue with the power unit and I had to slow down. It’s a shame because the race seemed to me to be under control. The team is disappointed and I am disappointed but there are a lot of positives to take home from this weekend.”

“They gave me an amazing car and that is very much to their credit. The car was very easy to drive and was very good. These things happen in motorsport: we took the best out of it anyway. It’s my first podium even if I’m not enjoying it as much as I wanted. It’s life, it happens, we’ll come back stronger”.

Sebastian Vettel: “Not the race we wanted. We started first and second and we didn’t finish there. A disappointing evening. I had a good start but already halfway through the first lap I realised that the car was extremely difficult to drive. I think Charles struggled less as he had no difficulties in passing me. It was quite tough out there. Then we lost P2 at the pitstop but came back.”

“In the second stint on the medium tyres maybe it was a bit better but overall we didn’t have the pace we should have had today. While battling with Lewis I made a mistake at turn 4, which is one of the trickiest corners on the track. I suddenly lost the car and I spun.”

“In doing so, I damaged the tyres so much that I had quite a lot of vibrations, which eventually led to the failure of the front wing. It was Charles’ race today, he got very unlucky. I am sorry for him and for the team.”

Mattia Binotto, Team Principal: “It was a shame for Charles. He was in the lead for much of the race and showed that he was particularly comfortable here in Bahrain, also setting the race fastest lap. He deserved to win and it was only the reliability problem, which we must now investigate, which prevented him from doing so. That is something unacceptable from us and it shows how important it is to get every last detail right in order to win.”

“With regards to Sebastian, these things can happen in racing when you are on the limit, therefore it is more important to consider the car, which today performed well. The team also did an excellent job, producing some really good pit stops. We head home with many positives on which to build for the rest of the season, such as our performance level and the way the team reacted. Clearly, there are still various things that we have to learn and we will continue to work on them.”