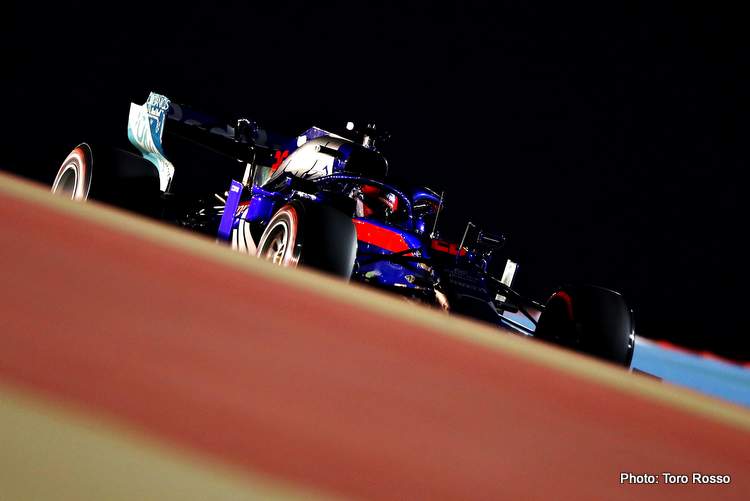 Both the Toro Rosso drivers ended day one of the Bahrain Grand Prix weekend in the heart of the midfield with Daniil Kvyat finishing in the top ten and Alexander Albon 13th in both sessions.

Daniil Kvyat: “Generally, we had quite a productive Friday. We managed to cover all of the useful test items we planned for the day, and also covered both short and long runs – which is very important for Friday practice! It seems like everything is quite tight in terms of performance among the midfield teams, so we will work hard overnight to optimise the car for tomorrow in order to put us where we want to be.”

Alexander Albon: “It was a pretty good day in the office. I think, as we’ve seen already, the midfield is really close which leaves no room for error. We struggled a bit with balance in the morning session but we were able to fix that for FP2, although we need to make some changes overnight to further improve the performance of the car. There’s definitely a few things we need to tune in order to be ready for tomorrow, so it’s just going to be about maximising the package we have and being at the sharp end of the midfield. We know what needs changing, so hopefully we can be more competitive tomorrow for Qualifying.”

Jonathan Eddolls, Chief Race Engineer: “It’s fair to say we’ve had a productive day, the car was very reliable and we completed our entire test plan with quite a lot of laps, so that was positive. In the morning we focussed on the option tyres with both cars: the track evolution is massive, as it always is here, so the track started dirty and dusty and this made the balance quite difficult.”

“FP1 was mainly focussed on trying to understand the track and get Alex up to speed with the circuit in an F1 car, while also doing some mechanical setup work. We need to be careful here because the track condition changes massively from FP1 to FP2, so what you learn in the day sessions often isn’t applicable to the sessions that count.”

“The balance was tricky in the morning with very high track temperatures, so we had to account for that going into FP2 with the setup changes we made, which were a step in the right direction. Dany set a good lap, while Alex had a bit of traffic in Turns 1 and 2 on his timed lap, which cost him a couple of tenths, but their laps were effectively comparable – ultimately, Alex is on the same pace as Dany and looking quite competitive over the short runs.”

“The midfield again is massively tight, so a tenth of a second can make around three positions. The key will be to work on all the fine details and try to get the car completely optimised for tomorrow. On the long runs, both drivers started on the option tyre then moved onto the prime, with both compounds behaving quite well. Looking into our competitiveness, we’re in reasonable shape in terms of where we want to be.”

Toyoharu Tanabe, Honda F1 Technical Director: “It was a normal Friday and we worked on optimising our PU settings to suit this circuit. We went through all our programme with both teams and everything went smoothly. The first session is run in much higher temperatures than the evening practice, so we have gathered plenty of data from running in different conditions, which will help us prepare as well as possible for the rest of the weekend.”