Bahrain F2: Big interest as season kicks off this weekend 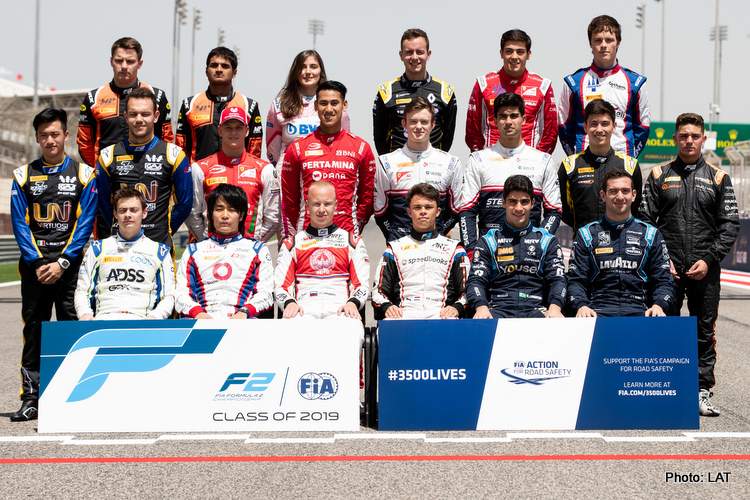 The FIA Formula 2 Championship returns to action this weekend for its third season, as the first round takes place at the Bahrain International Circuit in Sakhir to kick off the 2019 season.

Since 2017, F2 has firmly established its position as the ultimate feeder category to F1 with Charles Leclerc, George Russell, Lando Norris and Alexander Albon all stepping up to an immediate race seat following their successful F2 campaign.

As a new season begins, this year’s grid of young talent is looking to emulate their predecessors as they seek to reach the pinnacle of motorsport.

The 2019 field is a mix of experienced drivers and promising rookies, one of which led the rest of the pack at the first pre-season testing at Jerez de la Frontera: Mick Schumacher set the quickest laptime of the three days.

In the second test session which was held at Barcelona, it was Nyck De Vries who established himself as one to watch this year going fastest overall. The Dutchman also happens to be the driver with the most F2 wins before the start of the new season four.

With hot temperatures, Bahrain promises to deliver a challenging opening round for the teams and the drivers, who will have to excel in tyre management – Pirelli providing the Medium and Soft compounds – and heavy braking zones. All the ingredients are here to provide the fans with another exhilarating season!

Pirelli Quote from Mario Isola: “Unlike Formula 1, the Formula 2 drivers will be racing in the heat of the day in Bahrain, meaning that thermal degradation will be a bigger factor. Managing this will be crucial, especially as they are also racing on the most abrasive surface of the season. With the top three drivers in Formula 2 last year all finding seats in Formula 1, it’s a tried and trusted route to the top of the sport.”

Warm Up with Carlin’s Louis Delétraz: “One of the biggest challenges of the Bahrain International Circuit is the heat: it’s extremely hot at Sakhir so there’s a lot of tyre degradation which is something we need to handle to perfection. Also, there is a lot of sand around the track which means that when the wind blows, it gets dirty. So we always have to adapt.

“The temperature changes quite a lot between free practice and qualifying. Moreover, we are on the softer compound. These are two important factors we have to take under consideration when setting up the car for the qualifying session.

“The tyre degradation is really high as the track is quite abrasive. Last year, in the Sprint Race, some people did pit stops. This shows just how much tyre management is key to the weekend’s success.

“The layout of the circuit is quite twisty so overtaking is a bit harder there than at some others. But there are at least four spots where you can pass. That makes it a pretty cool track that I enjoy a lot.

“This opening race weekend is very important: you want to launch your season the best way. You want to perform strongly from Day 1. There has been six days of testing in Jerez and Barcelona where the team and I worked a lot to improve the car and be ready for the fight, for victories and for the championship.”

“This Friday, we will get the first answer after quali to know if we did a good job and that’s something we’re all looking for. I’m very excited to be back!” added Delatraz.