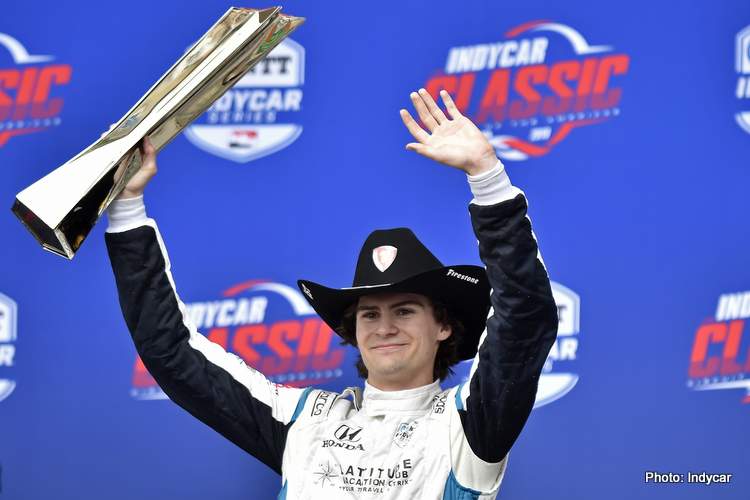 The newest race on the NTT IndyCar Series schedule has the newest – and youngest – winner in Indycar history.

Colton Herta won the Indycar Classic at Circuit of The Americas on Sunday, in just his third series race. At 18 years, 11 months, 25 days old, the second-generation driver became the youngest to win an Indy car race in the sport that’s more than a century old. The previous youngest race winner was Graham Rahal, who was 19 years, 3 months, 2 days when he won at St. Petersburg in 2008.

Herta, in the #88 Harding Steinbrenner Racing Honda won by 2.7812 seconds over Team Penske’s Josef Newgarden. Herta inherited the lead when pole sitter and race leader Will Power made his final pit stop under a full-course caution on Lap 46.

Having made his final stop under green on Lap 43, Herta remained on track while Power, Alexander Rossi and Scott Dixon pitted under yellow and assumed the lead. He held off Newgarden on a Lap 50 restart and was never challenged in coming home victorious as the NTT IndyCar Series race for the first time on the state-of-the-art, 3.41-mile permanent road course.

Power dominated the first three-quarters of the 60-lap race, leading every lap until he, Rossi and Dixon were caught out by the race’s only caution period caused when the cars of James Hinchcliffe and Felix Rosenqvist made contact.

The Swede crashed into the barrier on the inside of Turn 19 at the entrance to pit lane, bringing out the yellow flag with the three frontrunners needing to make a last pit stop to make it to the end of the race.

A stroke of bad luck turned even worse for Power, who said the drive shaft broke on his No. 12 Verizon Team Penske Chevrolet as he attempted to leave his pit stall. Power finished last in the 24-car field.

Newgarden finished second in the #2 PPG Team Penske, backing up his win in the season-opening win at the Firestone Grand Prix of St. Petersburg. Unofficially, Newgarden leads Herta by 18 points in the championship after two of 17 races.

Ryan Hunter-Reay finished third in the #28 DHL Honda for Andretti Autosport. Other notable finishes came from: Sebastien Bourdais, who moved up 12 spots from his starting position to place fifth; Marco Andretti, who advanced 14 positions to finish seventh and rookie Patricio O’Ward, who finished eighth in his season debut with Carlin. 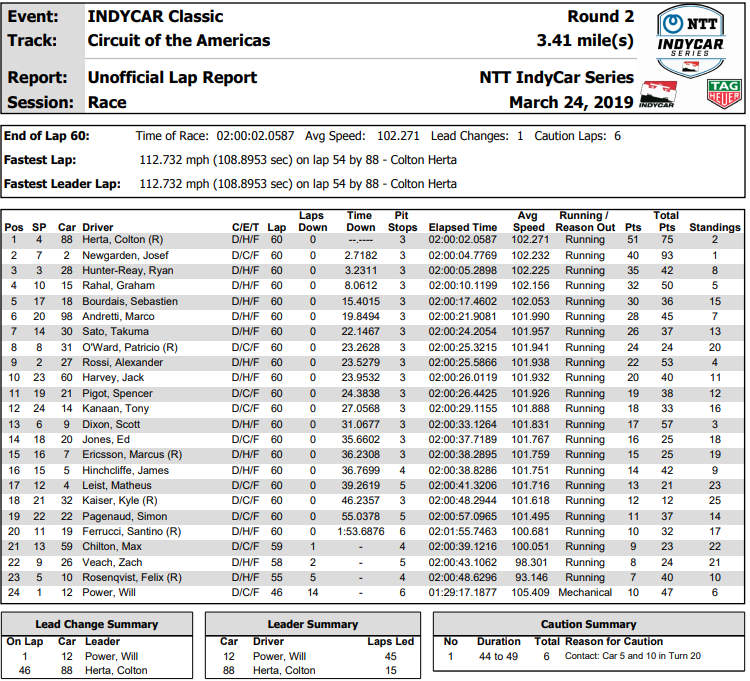