Red Bull: A fantastic start to the season 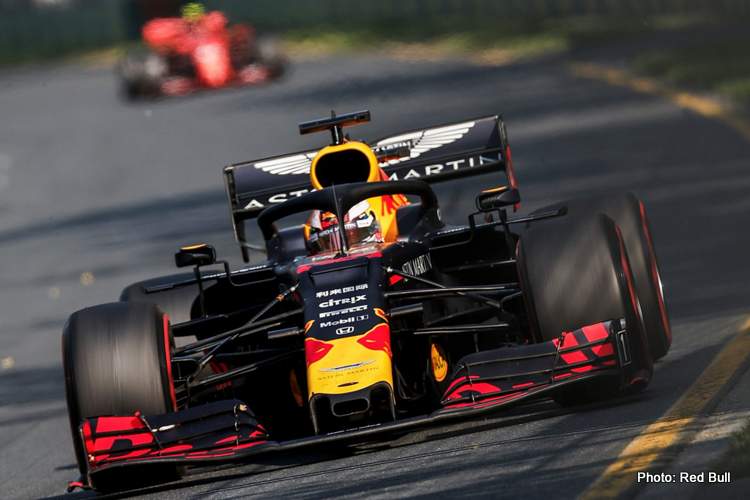 While Ferrari imploded at the season-opening Australian Grand Prix it was encouraging to see the Red Bull Honda combo get off to a great start, inciting hope that the new partnership will take the battle to Mercedes as the season develops.

Max Verstappen grafted hard for his first podium, overtaking Sebastian Vettel for third late in the race and then giving chase to second-placed Lewis Hamilton, but the ammo ran out as did the laps but while Mercedes driver claimed Max was no threat.

Nevertheless, it was a great showing and indicates that Honda have made huge strides with their power unit package. The Japanese manufacturer were last on the podium back in 2008.

In the wake of all this, one has to wonder what the top brass at McLaren (no points and a blow up with Renault power) are thinking right now…

Pierre Gasly’s debut weekend with the Blues was disappointing and totally overshadowed by his younger teammate. The Frenchman was not helped by his team’s strategy gaffe during Q1 that confined him to the wrong end of the grid.

In the race, he was overly cautious, perhaps too much so, as he could not find his way around Daniil Kvyat in the Toro Rosso also powered by Honda.

Max got the Team’s partnership with Honda off to a champagne-drenched start in Melbourne, with the Dutch driver claiming third place at the season-opening Australian Grand Prix.

Max held his starting position of fourth at the race start and over a long first stint steadily edged his way towards Ferrari’s Sebastian Vettel. The German made his sole stop for tyres on lap 15 but Max held on until lap 25 and when he emerged he used the greater pace at his disposal to make a textbook move on Vettel around the outside into Turn 3 on lap 30 to claim third place.

After 58 laps the position was made official and Max handed the team its first podium of 2019 and gave Honda its first F1 trophy since the 2008 British Grand Prix when Rubens Barrichello finished third.

Meanwhile, Pierre Gasly’s team debut ended in P11. Starting from P17, the Frenchman put in a hugely long first stint on medium tyres. He emerged in P11 behind Dany Kvyat, but despite pressing hard in the closing laps, Pierre could find no way past the wily Russian.

Max Verstappen, 3rd: “I am very happy for the Team and also for Honda to finish on the podium today. Since we started working together it has been amazing and I am really enjoying the partnership, so this is a well-deserved third place for all of us.”

“To be able to challenge Lewis at the end of the race and overtake Seb on-track, which around here is very difficult, is very positive. We had a little advantage with the tyres but it was satisfying to pressure Lewis even though I couldn’t get quite close enough to overtake him.”

“The car was working really well and we also look strong on the straights which is hopefully a good sign for the rest of the season. I heard this is the first podium for Honda since 2008 so I am very happy that I managed to achieve this for them today.”

Pierre Gasly, 11th: “It was a pretty difficult race. With the new bigger rear wings, I couldn’t see the lights on the grid so I had to react with the cars around me and I lost a couple of places. Then I got stuck in traffic and even with the DRS, it’s super difficult to overtake here plus I had some debris in my front wing which didn’t help.’

“I spent the whole race five tenths from the car in front but my tyres were just sliding and I couldn’t get past. I pushed as much as I could and I tried everything but it wasn’t enough to make it into the points. In general, the pace over the weekend was really good.”

“In qualifying, we got knocked out of Q1 but I was happy with my first lap and it was just unfortunate that we didn’t make it through. Bahrain is a race I really like and we’ve seen the car is competitive so we’ll keep our heads down, stay focused and give a big push in two weeks’ time.”

Christian Horner, Team Principal: “A fantastic start to the season with a podium finish at our first Grand Prix with our new power unit partner Honda, who haven’t finished in the top three since 2008.”

“Max put in a remarkable performance today, and after a decent start and one of the day’s fastest pit stops, he was able to take advantage of the C3 tyre and make a great pass on Sebastian. He went on to put Lewis under pressure for the rest of the race, but didn’t get quite close enough.”

“Pierre battled his way from P17 to finish just outside of the points, but at this track it’s notoriously hard to overtake. He drove the wheels off the car and it’s a shame that it wasn’t rewarded with a point. He raced hard and I’m sure his time will come. After a promising season opener, we now look ahead to Bahrain.”

Big Question: Has Max got the ammo to challenge Mercedes?