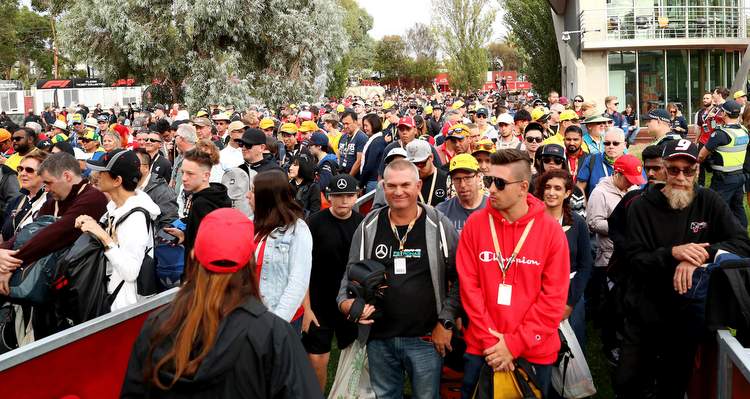 The first pole position of the season went to Lewis Hamilton, at the end of this afternoon’s qualifying session for the Formula 1 Rolex Australian Grand Prix 2019.

The reigning world champion was quickest ahead of his Mercedes team-mate Valtteri Bottas. This was the Englishman’s 84th pole, his 58th with Mercedes and the eighth at this track. Only Ayrton Senna and Michael Schumacher have taken this many at one circuit; Imola in the case of the former and Suzuka for the latter.

An all-Mercedes front row is nothing new in this “hybrid” Formula 1 era, but the gap between the Silver Arrows and third-placed Sebastian Vettel is quite surprising. Hamilton posted a 1:20.486 and Bottas a 1:20.598, making them the only two drivers to get under the 1m 21s barrier, as the Ferrari man’s best lap was a 1:21.190.

After the Barcelona tests, one might have expected Ferrari to be the class of the field, but today’s verdict from Melbourne has turned that on its head, while confirming the first impressions from yesterday’s free practice.

Max Verstappen will line up in his Aston Martin Red Bull Racing in fourth spot, alongside Vettel, having set a time of 1:21.320. The Dutchman can be relatively happy with having split the two Ferraris. Making his debut in the red race suit, Charles Leclerc was fifth quickest in 1:21.442.

Max’s team-mate, Pierre Gasly had a difficult afternoon, failing to make it further than Q1 because of a strategic error from the team, which means the Frenchman will start from the penultimate row.

As was the case in 2018 at Albert Park, again this year, the Ferrari-powered Haas team was fourth in the pecking order, at least in qualifying. Romain Grosjean was sixth in 1.21.826 and Kevin Magnussen was seventh in 1.22.099.

The Haas team-principal, Guenther Steiner, who has proved to be one of the most popular figures in the new Netflix F1 documentary, “Drive to Survive,” will be hoping for a better Sunday than his team had here twelve months ago!

Lando Norris had a big smile on his face after qualifying. The rookie took his McLaren to eighth spot on the grid, making him the quickest Renault-powered car today, but team-mate Carlos Sainz was rather more downbeat, down in 18th spot. As for the Renault factory team, it has locked out the sixth row of the grid, with Nico Hulkenberg getting the better of local hero Daniel Ricciardo.

Alexander Albon was another rookie who was reasonably happy in thirteenth spot in the Honda-powered Toro Rosso (1:22.636.)

Things did not go as well for George Russell, in penultimate spot on the grid with a time of 1:24.360, with further proof of Williams’ difficulties coming from the fact that Robert Kubica is last in 1:26.067. It was the first time at this track that both the team’s cars have failed to make the cut out of Q1.

The party atmosphere continued today, thanks to the enthusiastic Melbournian fans. There were 87,000 of them today (Saturday) bringing the three-day total since Thursday to 220,000.

It’s no surprise they came in such large numbers as they were able to watch no fewer than 138 race cars take to the track: apart from the 20 Formula 1 single-seaters, there was open-wheeled action in the F4 class and closed-wheel racing from the Supercar Championship, the Australian GT Championship, the Ferrari Challenge Trofeo Pirelli and the Porsche Carrera Cup, as well as 40 Lamborghinis on a parade lap. And tomorrow, it steps up a gear with even more excitement in prospect!