It’s a wrap! Eight days of Formula 1 preseason testing are over with silence descending over Circuit de Catalunya the ‘circus’ packs up and the next time engines will be heard in anger again will be in FP1 on Friday 15 for the season-opening Australian Grand Prix.

The final day in Spain was telling, Sebastian Vettel ended the day fastest of all with a time of 1:16.221 set during a fast run in the morning session which was good enough for top time of the day.

However, he missed out the final hour of the session when the SF90 stopped on track with an electrical problem that would not be resolved in time to get out on track again. Nevertheless, he did complete 110 laps.

A team spokesperson reported: “Seb’s car stopped due to an electrical issue, [it] would take too much time for repair, so this is it for today.”

The big news on Friday was that finally Mercedes turned it up and got going with some performance tilted runs, with Valtteri Bottas having a fling on the softest Pirelli C5 compound for the first time. His effort was good for third best, albeit three tenths off the benchmark pace.

Lewis Hamilton took over the W10 for the afternoon shift, towards the end of the day he posted some strong laps also using the fastest rubber, his best effort 1:16.224 was good for second – only three-thousandths of a second shy of the top time.

Earlier in the day the World Champion warned that Ferrari were “potentially half a second faster” than the Mercedes package.

On the other side of the coin, Max Verstappen did only 29 laps all day long as a gearbox issue on the RB15 grounded the car as the team sorted out the issue. He disappeared into the Red Bull garage and did not emerge on track for the rest of the day.

The shunt Pierre Gasly had a day earlier, which all but destroyed the car no doubt came back to haunt the energy drinks outfit.

The sister Toro Rosso team continued to have a potent preseason with Daniil Kvyat managing good mileage on the day to end up fifth fastest and with 128 laps on his chart.

Ahead of the Russian on the timing screens was Nico Hulkenberg in fourth, seven tenths down on the top time but a quarter of a second up on teammate Daniel Ricciardo who did the morning stint in the RS19.

McLaren’s Carlos Sainz was sixth fastest on a day in which he did more mileage than any other driver, racking up 134 laps by the time the chequered waved at 6pm local time to bring the 2019-edition of F1 preseason testing to an end.

The reality is that right now no team has their cars on full pelt, and one could imagine them circulating the Spanish Grand Prix venue in the low 15s or even break into the 14s with ‘Party Mode’ activated. Qualifying for the race in Barcelona will make for an interesting comparison.

But first, we head to Melbourne for what promises to be a captivating start to an intriguing F1 season we have on the cards for 2019. Bring it on! 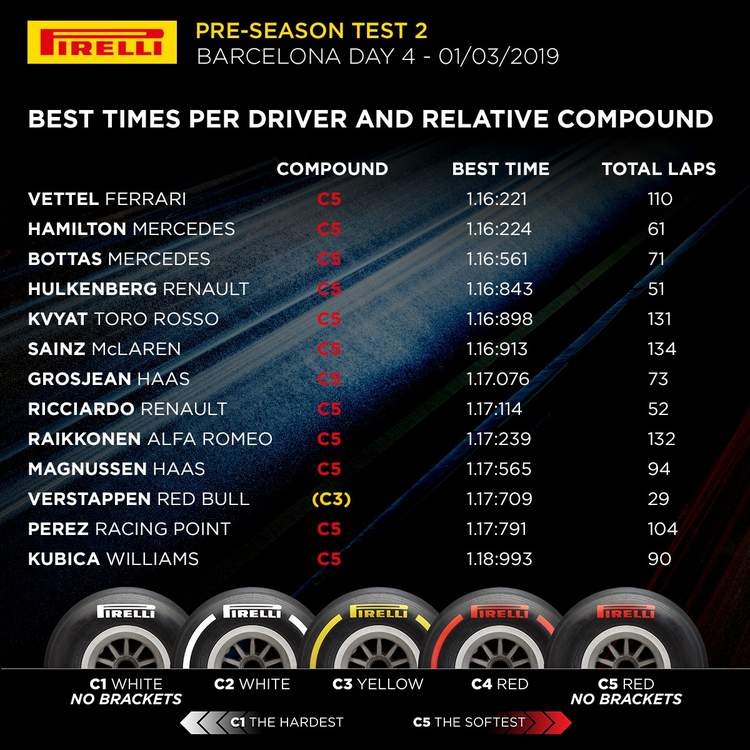