After two frustrating days, Ferrari got their programme back on track with Charles Leclerc setting the top time before the lunch break on the third and penultimate day of Formula 1 preseason testing at Circuit de Catalunya on Thursday.

About five minutes before lunch, with the softest Pirelli C5 tyres bolted on to the Ferrari SF90, Leclerc powered around the Spanish Grand Prix venue in the best time of 1:16.231 – a tenth off pole for last year’s race at the same track – bettering his table-topping time he set half an hour earlier.

Ferrari were clearly happy to allow Leclerc strut his stuff and confirm that the SF90 is indeed a handy piece of kit. The team’s new driver racked up 56 laps in the process. He will remain in the car for afternoon shift.

Notably, Mercedes with Lewis Hamilton at the wheel managed a massive 85 laps during the sunny morning in Barcelona, his best lap of 1:18.097 which he set on the C2 tyres, the second-hardest Pirelli compound available, was 1.8 seconds shy of the top time.

Sky report that “tyre corrected, it stands as Mercedes’ best of the first seven days of running” but it is clear that the mythical Party Mode is still under wraps in the Silver Arrows garage.

At the lunch break, Toro Rosso rookie Alex Albon was six tenths adrift of the top time, ending second while completing an impressive 75 laps – equal to a grand prix distance and more – as he continued to impress in preparation for his Grand Prix debut, in Melbourne, on 17 March.

McLaren’s form, which saw them end the previous two days fastest of all, continued with Lando Norris third fastest in the cockpit of the MCL34, the rookie on 66 laps at the half-day mark.

Pierre Gasly was fourth fastest in the Red Bull with 44 laps, followed by Renault’s Nico Hulkenberg with 70 laps during his stint in the car, which he hands over to Daniel Ricciardo for the rest of the afternoon.

It is worth noting that the four fastest laps of the past six and a half days of testing were set in the morning stanza in Barcelona by Leclerc, Albon, Norris and Gasly – all drivers with new teams. 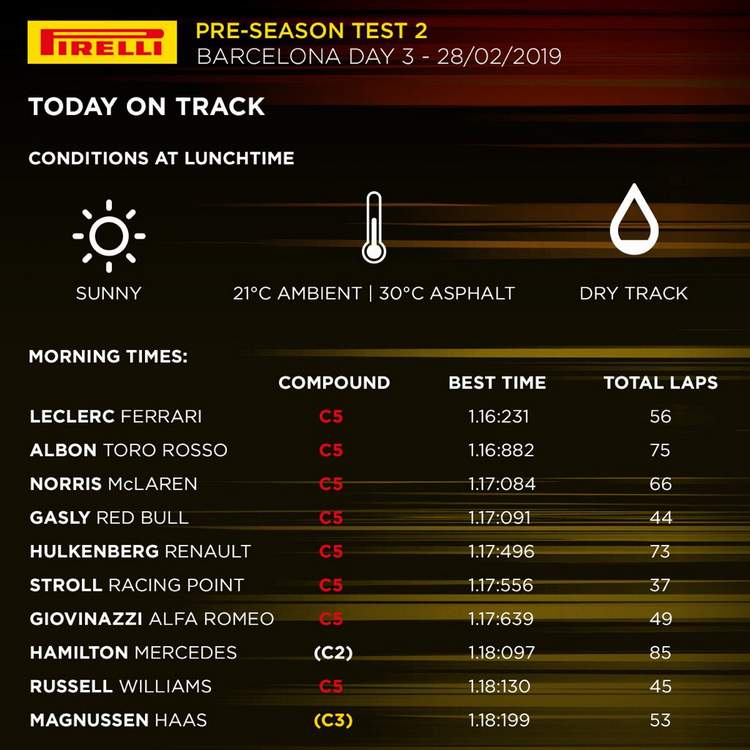