Carlos Sainz gave McLaren reason to smile as he topped the second day of the second Formula 1 preseason test at Circuit de Catalunya in Spain, a day headlined by Sebastian Vettel’s dramatic crash caused by a mechanical failure on his Ferrari.

Sainz set the best time of testing so far when he powered around the Spanish Grand Prix venue in a best time of 1:17.144 during the morning session on the Pirelli C4 (second softest) tyre. He completed 130 laps to cap a very strong day for the Woking outfit.

Sebastian Vettel was second fastest for most of the day but Ferrari’s testing was marred when a “mechanical failure” on the SF90 caused him to spear heavily into the barriers. He was unhurt but the car needed a serious rebuild and cost the team the whole afternoon of track time.

Vettel was second at that point and ended the day third despite running limited to 40 laps. His best time was set on the medium C3 Pirelli. He was also forced to visit the medical centre for a check-up because it was a substantial impact.

New teammate Charles Leclerc emerged late in the day for about ten minutes of running but his day was ruined by the incident.

No one had a really serious go at Sainz’s top time, although Sergio Perez had a bash in the afternoon with C4s bolted on to put the Racing Point second on the timesheets at the end of the day.

A good second day for Williams who all but missed the first test last week.

Mercedes were once again ominously subdued with Valtteri Bottas and Lewis Hamilton combining to rack up 176 laps in the W10, by far more than any other car but still no sign of true pace and thus splitting speculation: the Champs are sandbagging or the champs have a problem. Time will tell…

Apart from the stoppage for to clear Vettel’s wrecked car, there were two more red flag periods for when Sainz stopped his McLaren on track with hydraulic issues and Verstappen stopping at the end of the pit lane. Raikkonen, meanwhile, ground to a half after the chequered flag at fallen to end the day. 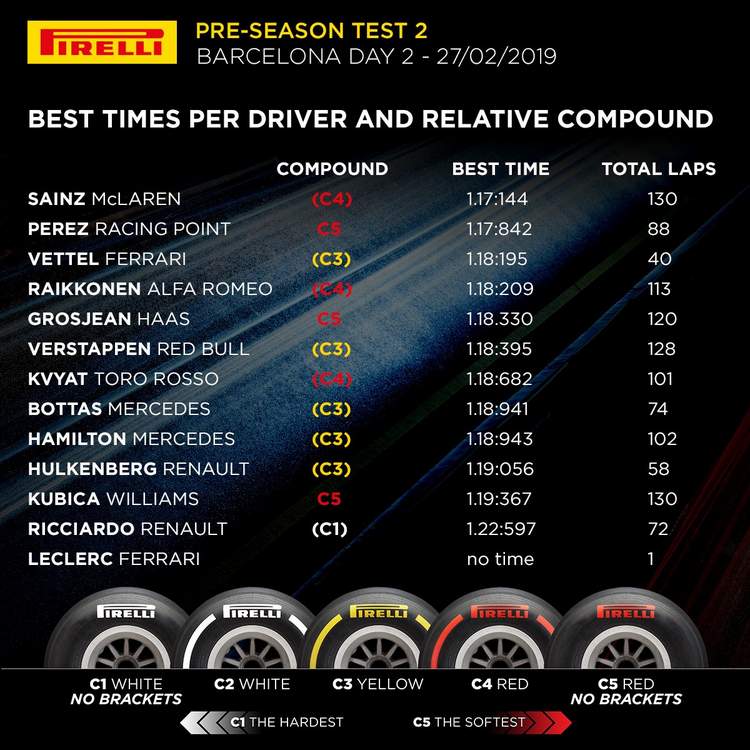