Late on the first day of the second Formula 1 preseason test at Circuit de Catalunya, McLaren sent out their rookie driver Lando Norris out for some quick laps and he duly delivered the top time in the Renault powered MCL34 during the final half hour of running.

Norris’ best time of 1:17.709 was a mere six-thousandths of a second quicker than Pierre Gasly in the Honda-powered Red Bull, who he tipped off the top of the timing screens at the end of the day.

Perhaps we will be told there was no intent to dislodge their former engine supplier off top spot, but there must have been some quiet satisfaction among the ranks in orange.

Once again lap times were topsy turvy and hardly reflect the true pecking order of teams as they prepare for the season-opening  Australian Grand Prix weekend next month.

However, it will be a boost for McLaren who are hoping they have a car that can give their drivers a fighting chance this season, unlike their recent predecessors. Norris completed 80 laps.

Red Bull will not flinch at dropping to second by the time the day ended, Gasly did a 136 laps, most of all on the day, in the RB15 suggesting that Honda have found reliability in their PU package and the pace is pretty handy too.

After a subdued first week of testing, Lance Stroll finally found himself more at ease in the Racing Point RP19 and popped the third best time for good measure, only a tenth shy of the top time.

Ferrari pair Sebastian Vettel and Charles Leclerc shared duties in the Ferrari, the newcomer doing the morning stint and the German on the afternoon shift.

Leclerc managed only 29 laps after losing track time as Ferrari checked the car’s cooling system to end seventh fastest. Vettel was fourth with 79 laps on his chart.

At lunchtime, Giovinazzi’s topped the times with a 1:18.589 in the Ferrari-powered Alfa Romeo set using the second softest C4 compound tyres towards the end of a sunny morning. At the end of the day he was fifth.

Five times F1 world champion Lewis Hamilton was eighth quickest of the 10 drivers on track in the morning stanza but did 83 laps, the second most and one less than Haas driver Kevin Magnussen. Both were on the second hardest C2 tyres.

Hamilton, focusing on long runs, had a different front wing on the W10 to the one used last week.

While common sense suggests that Mercedes are keeping their powder dry, but their day was seriously marred by an engine issue which curtailed Valtteri Bottas’ time in the cockpit to a mere seven laps as the team swapped PUs.

Williams had a more encouraging day, after missing most of the first test due to the late build of the car, with rookie George Russell doing 119 laps, ending with the ninth fastest time.

Spains double F1 World Champion Fernando Alonso was in the paddock and trackside to watch the afternoon running. 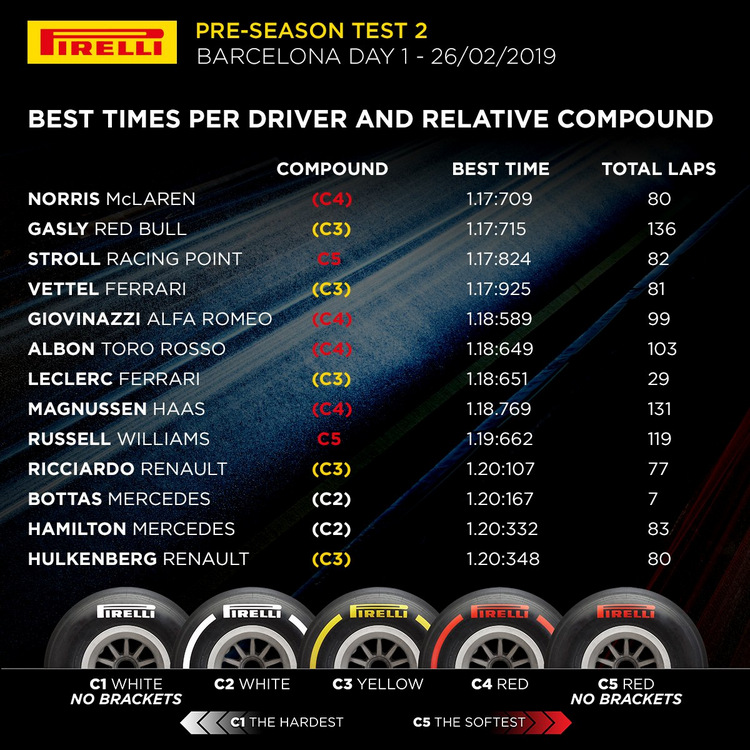