Barcelona Day 3: Kvyat surprises all in the Toro Rosso

Toro Rosso driver Daniil Kvyat surprised the establishment by claiming top spot on the timesheets at the end of the third day of Formula 1 preseason testing at Circuit de Catalunya in Spain.

The Russian went out with about ten minutes remaining in the day and popped a best lap of  1:17.704 just pipping Kimi Raikkonen who topped the screens for most of the day in the Alfa Romeo.

It was a strong day by Kvyat and Honda in particular who clearly unleashed a taste of their ‘party mode’ to grab the headlines after another busy day in Barcelona, in which he completed an impressive 137 laps.

Notably, Max Verstappen in the Honda-powered Red Bull RB15 was fifth fastest, a full second slower with 134 laps to his credit.

As mentioned, Raikkonen set the pace for most of the day, the first driver to break 78 seconds around the Spanish Grand Prix venue but ended second best by a fraction and 138 laps ticked off, more than any driver on the day.

After two subdued half days in the Renault, Daniel Ricciardo showed some muscle by setting the third fastest time in his 80 lap stint in the car he shared with Nico Hulkenberg on the day, the Aussie seven tenths faster than his new teammate.

After dominating the first two days, Ferrari were more low key as Vettel pounded out 134 laps in his way to the fourth best time on his last day in the SF90 this week.

Almost at the foot of the timing screens were the Mercedes, obviously not at all interested in slugging it out in testing and revealing their true hand but at the same time triggering the question: Do Merc have a problem?

Unlikely, but not implausible. As usual, time will tell, maybe tomorrow (Day 4) the World Champions will tease…

What they did not get in times they certainly excelled with mileage as together Lewis Hamilton and Valtteri Bottas the W10 amassed a whopping 182 laps, by far more than any of their rivals.

Pietro Fittipaldi got another run in the Haas, before handing over to Romain Grosjean who went on to post the seventh-fastest time. The pair racking up 117 laps.

There were five red flag stoppages during the eight hours on track all triggered by the Aemrican team’s new car, the team discovering an ignition problem as the cause.

The headrest issue on the VF19 was sorted out by the team, the issue forced Kevin Magnussen to cut short his first run on Tuesday.

Finally the Williams FW42 arrived in Barcelona, and around 3pm it made it onto the track for what was very much an installation and systems check run with George Russell at the wheel. For now, the relief that the car actually runs was palpable around the team garage!

After three days of preseason testing things may appear somewhat topsy turvy, but until Mercedes actually turn up the horsepower, it’s all a bit of a guessing game. 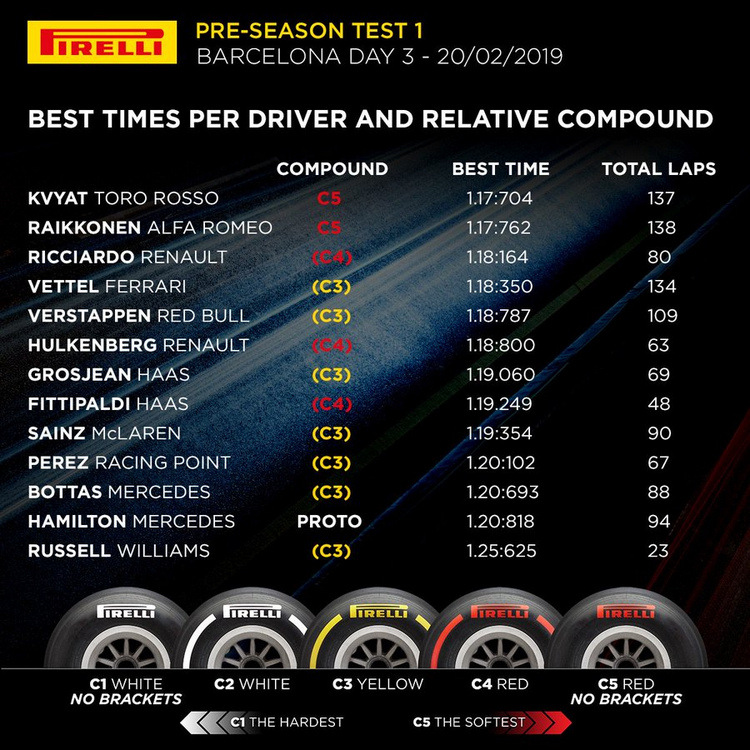