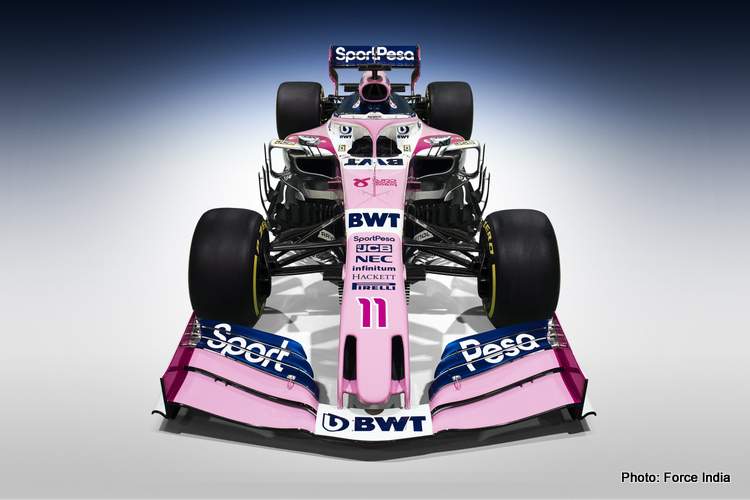 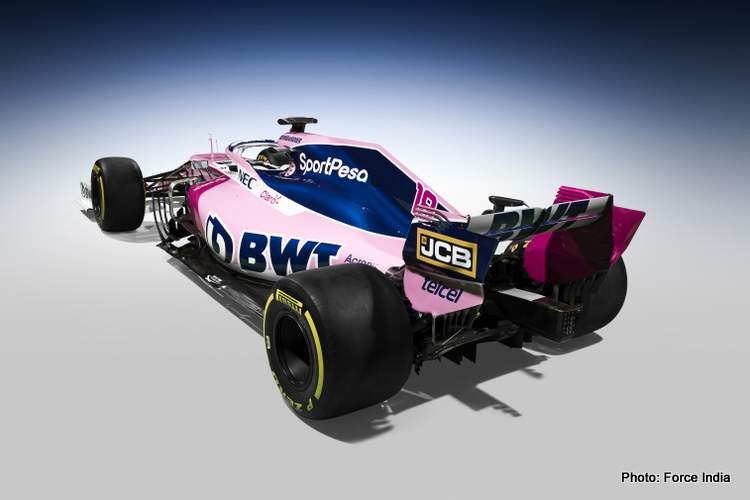 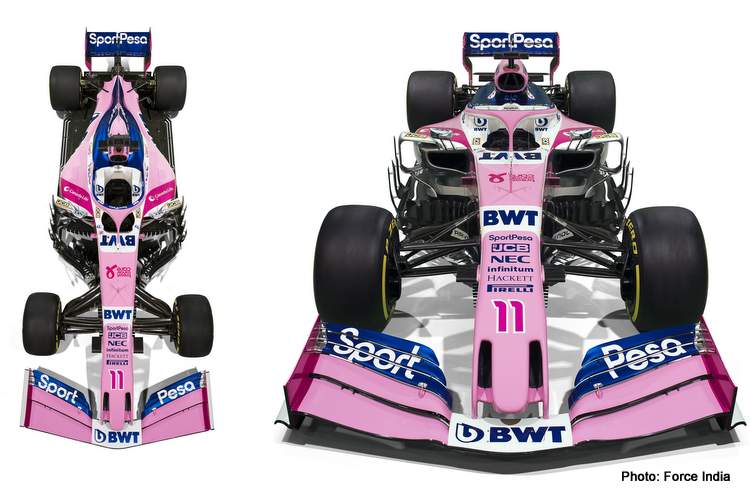 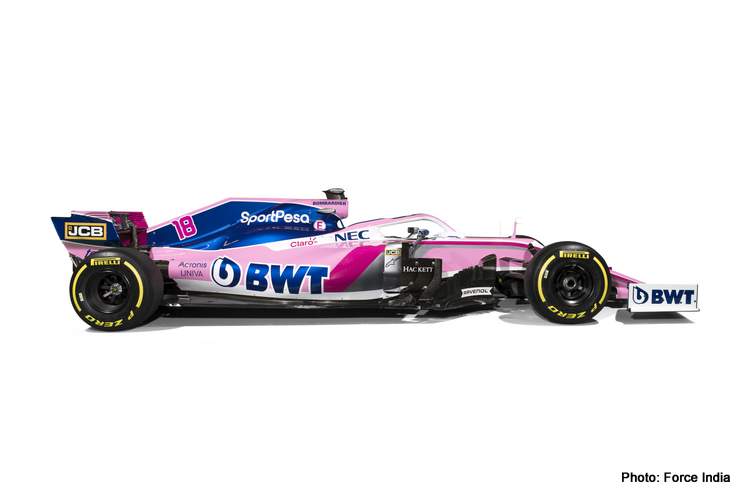 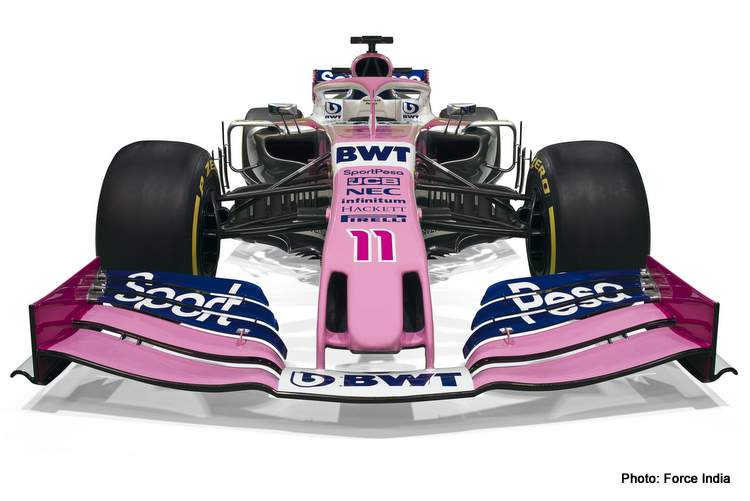 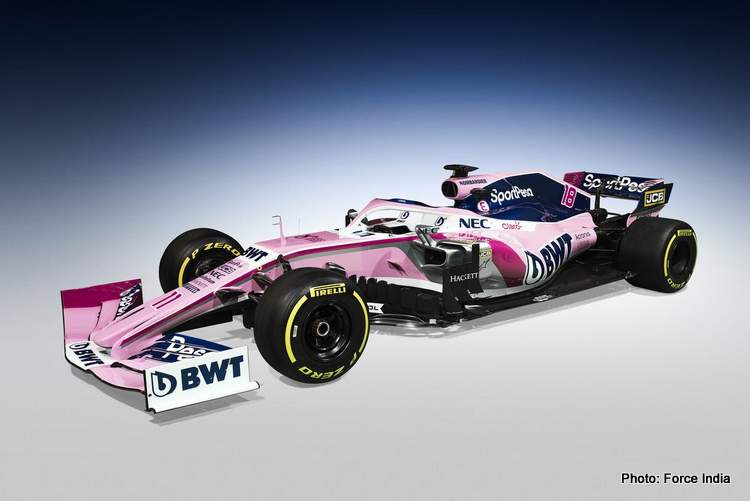 The Sport Pesa Racing Point was born today during a reveal at the Canadian International Auto Show in Toronto, heralding a new era for a team with many guises including the original Jordan Grand Prix, Midland F1 Racing, Spyker F1 and Force India before the new takeover by a consortium led by billionaire Lawrence Stroll.

Lance Stroll and Sergio Perez will drive the ‘Pink Panthers’ this season, with extra funding the team’s team has high aspirations, led by an owner demanding results but at the same time willing to spend to achieve the targets.

The on-stage presentation at the Canadian International Autoshow showed off a striking evolution of BWT’s pink livery adding the blue of new title partner, SportPesa, the global technology and entertainment company. A new ‘point’ logo in pink, blue and magenta was also introduced alongside the team’s new identity as SportPesa Racing Point F1 Team.

The arrival of SportPesa sees prominent branding on the engine cover as well as on the front and rear wings. Logos of principal sponsor, BWT, are positioned on the sidepods, front and top of chassis, headrest and reverse face of the rear wing. The launch event also introduced new partnerships with household names, JCB, Bombardier, and Hackett, with all brands enjoying branding positions on the car’s new livery.

The longstanding partnerships with Claro, Infinitum and Telcel continue as does the NEC relationship with branding on the headrest, nose and wing mirrors. Logos from lubricants brand, Ravenol, appear on the barge boards, while insurance brand, Canada Life, takes up a position on the lower engine cover. The partnership with Acronis continues with logos situated on the rear of the sidepod.

Speaking in Toronto, Team Principal & CEO, Otmar Szafnauer, said: “After months of hard work behind-the-scenes it’s incredibly exciting to come to Canada and present our new identity. The long-term aim is to take this team to the very top of the sport. We are putting the building blocks in place and it’s important we take a good step forward in 2019 as we begin this new era. We want to be fighting for podiums on merit and aiming for a strong top four finish in the championship.”

Along with the new era for the Silverstone based outfit comes a new title sponsor in the form of Sports Pesa:

SportPesa, the growing global technology and entertainment company, has today been announced as the new title partner for Racing Point, with the team now known as SportPesa Racing Point F1 Team.

The announcement, alongside a reveal of the team’s new car livery, was made during their pre-season launch event, held during the Canadian International Auto Show; the first ever Formula One team launch in Canada.

Present at the reveal were the two team drivers, Sergio Perez and Lance Stroll, along with the Team Principal, Otmar Szafnauer, and Technical Director, Andrew Green.

The multi-year deal will commence with immediate effect, with the team referred to as SportPesa Racing Point F1 Team for the duration of the partnership. The Racing Point cars retain their pink colour, with BWT continuing as principal sponsor of the team, with the addition of blue SportPesa branding on the front and rear wings, and engine cover.

Otmar Szafnauer, Team Principal and CEO of SportPesa Racing Point F1 Team said: “SportPesa is a young, dynamic, growing company whose values align with our own vision to become a team capable of competing at the very front of the grid. We are excited to have such an ambitious partner on board to help us deliver our team mission and look forward to working with them to bring the sport of Formula One closer to fans around the world. The car looks stunning with the addition of blue to the already iconic pink livery, which gives us a strong identity as we begin this exciting new era.”

Adam Beighton, SportPesa, Company Director said: “We are absolutely delighted to become part of the extended Formula One family. This partnership is very important to us because it diversifies us into new territories and allows us to reach new audiences across the globe. Equally important is the platform it provides us which enables us to stay true to our mission; to build and develop grassroots and professional sport in the countries where we operate by bringing new opportunities to local communities.”